The passage To El Paso

To be where Donald Trump’s future wall will be 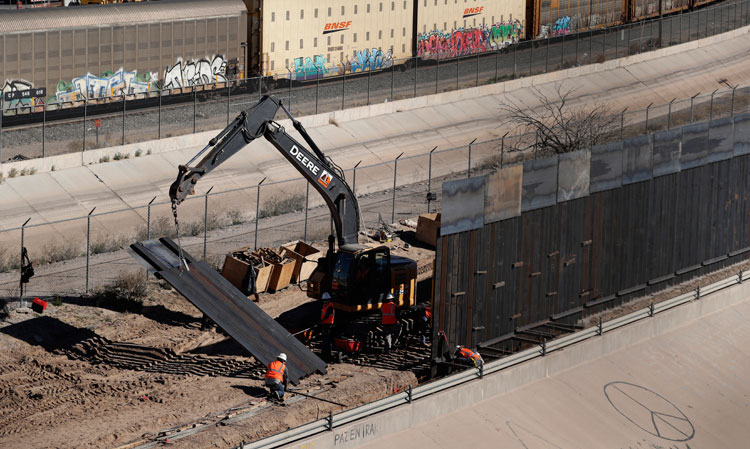 Until you step into the US-Mexico border town of El Paso and discover that the nullah in your Calcutta neighbourhood would put this river to shame, it is fairly easy to visualise the Rio Grande as grand.

This sedate town is tucked into the trijunction of the vast state of Texas, the adjoining one of New Mexico and across a highway that acts as international border, Mexico itself. This is now a zone caught in a troubled vortex — US President Donald Trump has decided to build a wall along this international border to keep Mexican infiltrators at bay.

Facing opposition, he decided to land in El Paso and declared a national emergency on February 15 to obtain funds for building this wall. On February 18, a coalition of 16 US states led by California, sued Trump and senior members of his administration in an effort to block his decision.

On the ground, however, my feisty American friend, Diane Paul, traipsed across the Santa Fe Street bridge from El Paso to Juarez in Mexico over the weekend and “saw no sign of a national emergency”.

She teased the border guards instead, seeking their help to find “the national emergency” and left them wondering if she had lost her marbles.

Our tryst with El Paso, where we drove 600 miles from Dallas, was not too intimidating, except the trauma that looms in the form of 18-wheeler trucks thundering along the highway. It entails travelling 420 miles along Interstate 20 West (from outside the Dallas metroplex) and another 120 miles on Interstate 10 West to reach the outer fringes of El Paso, an ancient mountain pass nestled amid the looming Franklin mountain range. Few know that the Franklins are the largest sustained mountain range in Texas, with the summit at an elevation of 7,192 feet.

In retrospect, the apprehension at the sight of these road monsters (and the ever-alert police cars) actually helped punctuate the monotony of the seemingly unending ride through the arid Texas countryside, with only the distant ranches and oil rigs for company.

The little towns of Abilene, Midland and Pecos, not to mention one sporting the name of Odessa, provide succour to weary travellers en route.

A couple of stops for a snack and gasoline apart, we travelled non-stop for nearly 10 hours before the lights of El Paso twinkled in the distance. “Look for the single star on the mountain to your right,” our host, Amit, a former faculty at the University of Texas at El Paso, had told us. Known as the “lone star state”, Texas sports its insignia with pride.

To our left ran the vast plains of Mexico, the much-maligned country whose inhabitants make Trump see red.

By day, traffic in and out of El Paso and Juarez defies borders and vigil. Or used to. The irony is too stark to escape the notice of even the most oblivious tourist. Wagonloads of trains once left Mexico for the US, chugging alongside Interstate 10, carrying goods made by poverty-stricken Mexicans, to be retailed in American chain stores. The newspapers that were once full of reports of Mexicans trying to escape border vigil and sneaking through the desert to the land of plenty, only to die of thirst

barely two miles inside US territory or by electrocution on a livewire fence now either eulogise the government’s “vision” or slam the move. We looked on all this from a vantage point, a telescope in the mountains. It was like looking down on a slum from a highrise, an experience most Indians can relate to.

On a less solemn note, the view from the top is truly memorable, providing an all-encompassing aerial survey of the craggy contours of the American southwest.

For visitors to El Paso, a trek to Mexico to sample local cuisine or visit the crafts mall is as easy as walking across the Santa Fe Street bridge to the historic border town of Juarez. Not that El Paso is any less Mexican in flavour, so we walked back across the border and opted for enchiladas and quesadillas to add variety to the staple tortillas that night, as well as fajitas, with generous helpings of tequila, relishing it even more than the staple Texan margarita.

As a takeaway from one troubled border to more restive ones in India, what of the suggestion for GPS-monitored bracelets — made in the Supreme Court by advocate Prashant Bhushan — that the US follows to track down illegal foreign nationals until their deportation! Radio collars next?