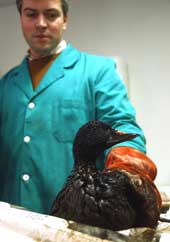 Caion (Spain), Nov. 19 (Reuters): A tanker laden with 70,000 tonnes of fuel oil split and sank off northwest Spain today, triggering what environmental activists said could become one of the world’s worst oil spills.

“I can confirm that the Prestige has sunk. The fore section sank at 1515 GMT,” said Lars Walder, a spokesman for the Dutch salvage company Smit Salvage, whose tugs earlier towed the vessel out to sea in the hope of protecting the coast.

The stern section sank hours earlier. Salvage crews had battled to keep afloat the battered bow section of the Prestige, 130 miles off the coast in Atlantic waters 3,600 metres deep.

Experts said the ship’s tanks might crack upon hitting the sea floor, implode from the pressure or eventually rust through.

Walder said it might be possible to pump the remaining oil from the tanks, but the depth of the sea and the bad weather would make any such operation extremely difficult.

The tanker was carrying twice as much oil as the Exxon Valdez was when it ran aground in Alaska in 1989, causing a spill that devastated a stretch of pristine wilderness.

Spanish officials said the Bahamian-flagged Prestige spilled 5,000 to 6,000 tonnes of its load when the vessel broke apart, adding to the 5,000 tonne spill that had left a 17 km oil slick in the ship’s wake as it was pulled out to sea.

The oil has blackened the rugged coastline of Galicia, thrown 1,000 Spanish fishermen out of work and coated sea birds.

One of Europe’s richest fisheries — habitat for such delicacies as goose barnacles and lobster — was under threat as the wind blew more oil from the sinking ship towards the coast.

“If the oil tanker loses all its oil... if all that escapes from the hull, then this is a disaster which is going to have twice the effect of the Exxon Valdez, which is one of the worst that we have known,” Christopher Hails, the World Wildlife Fund International’s programme director, said from Switzerland.

Toxic chemicals in the oil threaten to have “more insidious and longer-term effects” on the ecosystem than the immediate physical damage to marine life, Hails said. While the Exxon Valdez spilled crude oil, the Prestige was carrying fuel oil, more harmful to wildlife.

Hails said as much oil as possible should be transferred from the ship’s tanks.