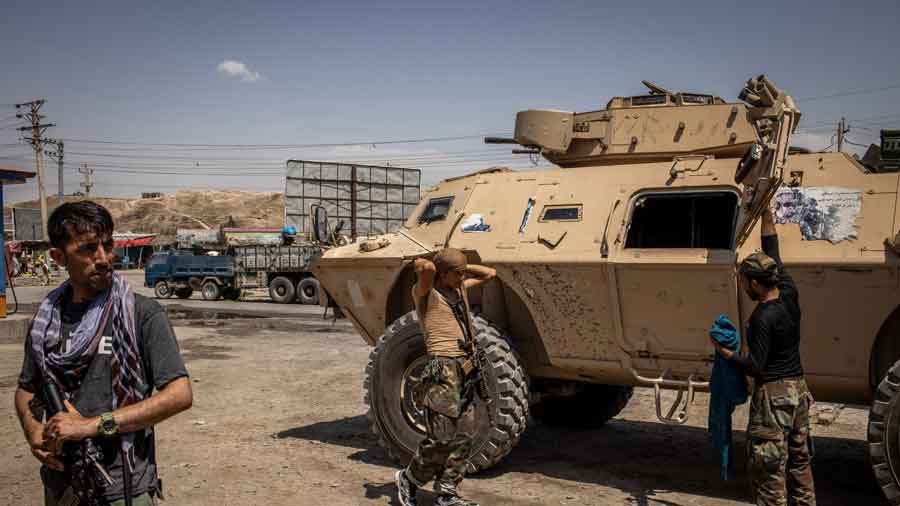 The Taliban warned Turkey on Tuesday against plans to keep some troops in Afghanistan to run and guard Kabul’s main airport after the withdrawal of foreign soldiers, calling the strategy “reprehensible” and warning of “consequences”.

Ankara, which has offered to run and guard the airport in the capital after Nato withdraws, has been in talks with the US on financial, political and logistical support.

Turkey has repeated that the airport must stay open to preserve diplomatic missions in Afghanistan, where a blast rocked Kabul on Tuesday and clashes have intensified across the country.

“The Islamic Emirate of Afghanistan condemns this reprehensible decision,” the Taliban said in a statement, referring to Turkey’s plan.

”If Turkish officials fail to reconsider their decision and continue the occupation of our country, the Islamic Emirate... will take a stand against them.”

In that case, the militant group added, the responsibility for consequences would fall on the shoulders of those who interfere.

The Taliban, who ruled Afghanistan with an iron fist from 1996 to 2001, have been fighting for 20 years to topple the western-backed government in Kabul and reimpose Islamic rule.

Emboldened by the departure of foreign forces by a September target, they are making a fresh push to surround cities and gain territory.

Turkish defence minister Hulusi Akar told reporters after a cabinet meeting on Monday evening that Turkey agreed to some points with US counterparts on running the airport and work towards a deal continues.

“The airport needs to remain open, be operated. All countries say this. If the airport does not operate, the countries will have to withdraw their diplomatic missions there,” he said.

Talks now involving ministries should be complete by the time US forces leave, a senior Turkish official told Reuters. “We still think there will be an agreement on the airport. We want to side with the Afghan people,” the official said.

Police said a blast rocked a busy area of Kabul on Tuesday, killing four people and wounding five. It was not clear who was behind the explosion or the target.

Clashes were continuing in the southern province of Kandahar, said Attaullah Atta, a provincial council member, with the Taliban being pushed back after a bid to break into a city prison.

Hundreds of families had fled the violence, he added.

Mohammad Daoud Farhad, director of Kandahar's provincial hospital, said it had received eight dead and more than 30 people, mostly civilians, wounded in clashes in the past 24 hours.

Early on Tuesday, Afghan security forces had retreated from the district of Alingar in the eastern province of Laghman, a local government official said on condition of anonymity.

A ceasefire pact with the Taliban in the district fell through in May.

On Monday, the Taliban circled the central city of Ghazni and made attacks overnight in their latest offensive on a provincial capital.

More Afghans are likely to flee their homes because of escalating violence, the UN refugee agency warned on Tuesday, as the Taliban take control of more territory in response to the withdrawal of US-led foreign forces.

“Afghanistan is on the brink of another humanitarian crisis. This can be avoided. This should be avoided,” Babar Baloch, spokesman of the UN High Commissioner for Refugees (UNHCR), told a Geneva news briefing.

“A failure to reach a peace agreement in Afghanistan and stem the current violence will lead to further displacement within the country, as well as to neighbouring countries and beyond.”

The UNHCR said an estimated 270,000 Afghans had been newly displaced inside the country since January, bringing the total population forced from their homes to more than 3.5 million.

Those forced to flee blamed the security situation, incidents of extortion by non-state armed groups and improvised explosive devices (IEDs) on major roads, as well as a loss of income and interruptions to social services, Baloch said.

The number of civilian casualties has risen by 29 per cent during the first quarter compared with 2020, the UNHCR said, citing figures from the UN Assistance Mission in Afghanistan.

The US general leading the war in Afghanistan, Austin Miller, relinquished command at a ceremony in the capital, Kabul, on Monday and quietly left the country, a symbolic end to America’s longest conflict.