A small group of women rallied in the Afghan capital for the first time in months, demanding a return of their freedoms 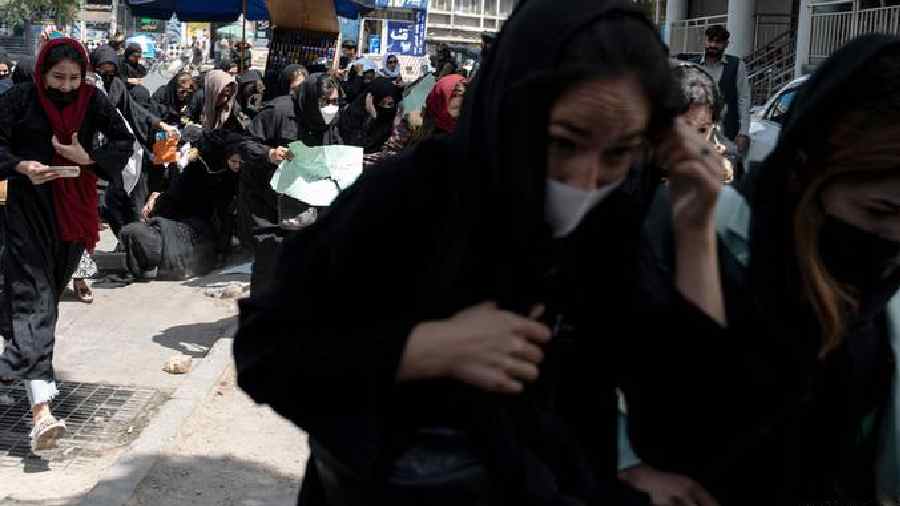 Witnesses described how women were fired upon and the beaten by Taliban forces
Deutsche Welle
Deutsche Welle   |   Published 13.08.22, 05:10 PM

Taliban forces on Saturday attacked and stopped a peaceful protest by dozens of women in Kabul, who were calling for a restoration of the rights they had obtained under the previous Western-backed government.

Staging their first rally in months, the group of about 40 women chanted slogans such as "food, work and freedom."

The women were making reference to the severe hunger crisis affecting Afghanistan since the Taliban took control last August, alongside curbs on women working, education and movement rights.

"Justice, justice. We're fed up with ignorance," they chanted, many not wearing face veils.

Protesters fired at, then beaten

Social media images showed Taliban forces firing warning shots and physically assaulting the women to disperse their gathering in the heart of the city, near the Education Ministry building.

Another video clip showed a small group of women cornered by the troops in a closed place. Some were beaten by Taliban fighters with their rifle butts.

DW correspondent Sandra Petersmann shared footage of both the protest and a separate video where the sound of Taliban gunfire can be heard as women flee.

"Unfortunately, the Taliban from the intelligence service came and fired in the air," said Zholia Parsi, one of the organizers of the march. "They dispersed the girls, tore our banners and confiscated the mobile phones of many girls."

A small group of Afghan women held their first protest in months, which was broken up by the Taliban
Deutsche Welle

The Taliban seized Kabul on August 15, 2021, hours after the last US troops withdrew and the democratically elected Afghan government crumbled.

The hard-line Islamists had promised a softer version of the harsh Islamist rule that characterized their first regime from 1996 to 2001.

But many restrictions have been reimposed, especially on women.

Tens of thousands of girls have been shut out of secondary schools, while women have been barred from returning to many civil service jobs.

Women have also been banned from traveling alone on long trips and can only visit public gardens and parks in the capital on days separate from men.

In May, women were ordered to fully cover themselves in public, including their faces — ideally with an all-encompassing burqa.

The United Nations and rights groups have repeatedly slammed the Taliban and no country has recognized their de facto government.

After the Taliban regained control last year, the US and EU imposed severe sanctions against Afghanistan.

The punitive measures, along with the country's ruined international standing, caused a deep economic crisis that has left the population facing severe food and medicine shortages.