Congressional delegation had traveled to Taiwan to make unequivocally clear we are proud of our enduring friendship: US Speaker 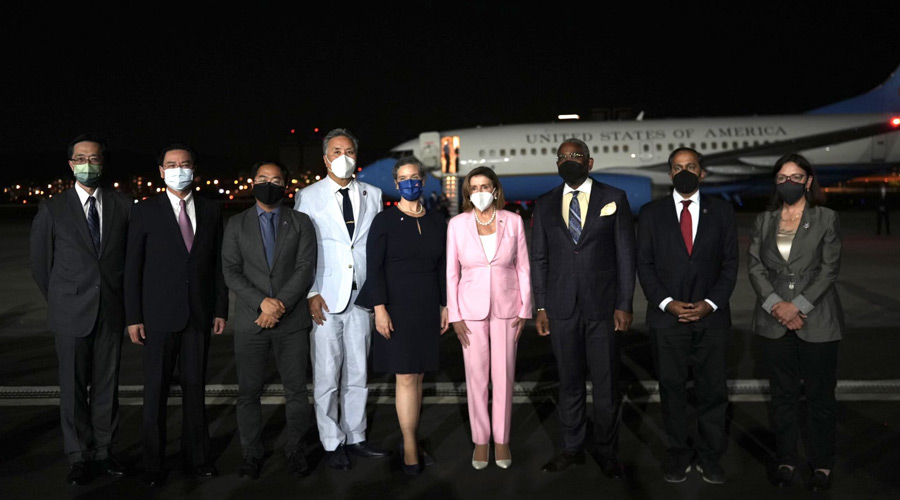 The meeting between the two leaders, which was streamed live online, seemed designed to maximize publicity and reinforce the relationship.
Twitter / @SpeakerPelosi
Mike Ives, Paul Mozur   |   Published 03.08.22, 10:21 AM

Taiwanese leader Tsai Ing-wen owes her presidency to her pledge to preserve the island’s sovereignty. Her meeting with Speaker Nancy Pelosi on Wednesday, and Beijing’s response to the visit, are highlighting the complexity of that task.

The meeting between the two leaders, which was streamed live online, seemed designed to maximize publicity and reinforce the relationship.

Pelosi called Taiwan “among the freest societies in the world.” She said the congressional delegation had traveled to Taiwan “to make unequivocally clear we will not abandon our commitment to Taiwan and we are proud of our enduring friendship.”

Tsai called Pelosi, “Taiwan’s most devoted friend.” She said the speaker had demonstrated “long-term support for Taiwan’s international participation,” a reference to jockeying between China and other countries to isolate Taiwan from international institutions.

At the event, Pelosi was presented with an award, called the Order of Propitious Clouds, given to Taiwanese and foreigners who have made outstanding contributions to Taiwan. Upon receiving the award, Pelosi said, to laughs, that she would wear it around her office in Washington.

Taiwan, to which Chiang Kai-shek’s forces retreated after the communist revolution of 1949, has never been part of the People’s Republic of China. These days, it has a distinct identity that makes any voluntary unification with China seem unlikely, even if Beijing treats it as having illegitimately broken away from its rule.

Tsai, the first woman to govern Taiwan, came to power in 2016, after eight years in which her predecessor pushed for closer relations with China. The election pivoted largely on economic issues, including concerns about growing economic ties with the Chinese mainland.

By 2019, her party had lost key local elections, imperiling her chances of winning a second term. Chinese leader Xi Jinping gave her a political gift that year by warning that Taiwan “must be and will be” united with China — and that independence efforts there could be met with armed force.

In response, Tsai departed from her usual cautious ambiguity, saying that Xi’s remarks were “impossible to accept” and calling for domestic and international support of Taiwan’s de facto independence.

She won reelection in 2020, reversing her fortunes by portraying herself as a defender of the island’s democracy and sovereignty — and tapping into local concerns over China’s rising authoritarianism.

Tsai’s profile rose further after the 2020 election, bolstered in part by Taiwan’s early success in containing the coronavirus. And she continued to refuse the condition China had set for improved relations: acceptance of Xi’s view that the island is an inexorable part of a greater Chinese nation under the Communist Party.

Tsai kept quiet in the days before Pelosi’s arrival. But political advisers close to her said they welcomed visits from U.S. officials, and her meticulous planning for Pelosi’s visit even earned some plaudits from members of the opposition Kuomintang.

“They did not make a statement to the outside world, trying not to antagonize the other side, and had done their best to make the situation in the Taiwan Strait not too tense,” said Alexander Huang, the Kuomintang’s head of international affairs.

We come in friendship, says Pelosi in Taiwan as China flexes muscles