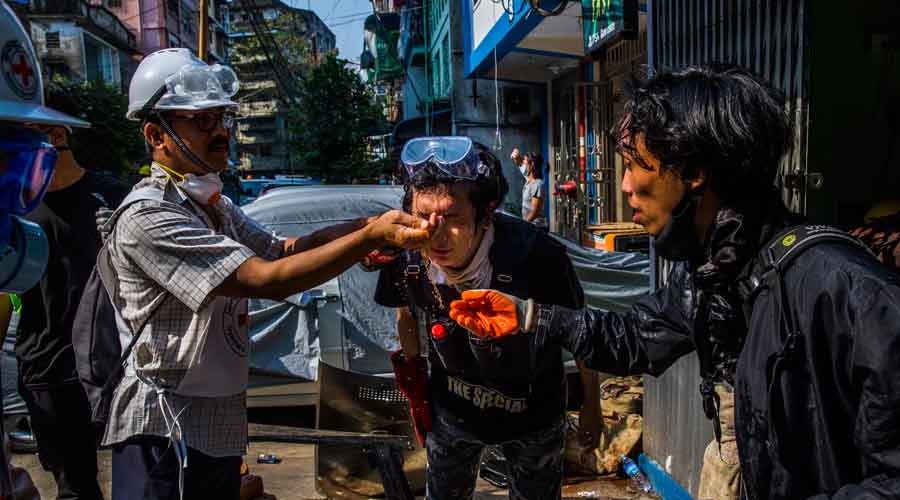 An official from deposed Myanmar leader Aung San Suu Kyi’s National League for Democracy (NLD) died in custody after he was arrested early on Tuesday, a former parliamentarian said, the second party figure to die in detention in two days as protesters challenged last month’s military coup in the streets.

Overnight, police arrested about 50 people who had been cornered by security forces in a district of Myanmar’s main city Yangon, a rights group said. But hundreds managed to escape the encirclement after crowds of demonstrators rallied in their support in defiance of a night-time curfew.

Western powers and the UN had called on the military to allow the youths to leave the area in safety.

Myanmar has been in crisis since the army ousted Suu Kyi’s elected government in a coup on February 1, detained her and other NLD officials, and set up a ruling junta of generals.

Daily protests against the coup are being staged across the country and security forces have cracked down harshly. More than 60 protesters have been killed and more than 1,800 detained, the Assistance Association for Political Prisoners (AAPP), an advocacy group, has said.

The NLD’s Zaw Myat Linn died in custody on Tuesday after he was arrested in Yangon around 1.30am (local time), said Ba Myo Thein, a member of the dissolved upper house of parliament.

“He’s been participating continuously in the protests,” Ba Myo Thein said. “Now, the relatives are trying to retrieve the body at the Military Hospital.”

Neither the military nor the police responded to calls for comment.

Zaw Myat Linn is the second NLD official to have died in custody in the last two days. Khin Maung Latt, who had worked as a campaign manager for an NLD MP elected in 2020, died after he was arrested on Saturday night.

The army has justified the coup by saying that a November election won by the NLD was marred by fraud — a claim rejected by the electoral commission. It has promised a new election, but has not said when that might be held.

International powers have condemned the takeover, which derailed a slow transition to democracy in a country that has been ruled by the military for long periods since independence from Britain in 1947.

Police firing guns and using stun grenades checked houses for anyone from outside the district and said they would punish anyone caught hiding.

However, thousands of people took to the streets in support of the youths, and many managed to to slip away.

Activist Shar Ya Mone said she had been in a building with about 15 to 20 others, but had now been able to go home.

“There were many free car rides and people welcoming the protesters,” Shar Ya Mone said by telephone.

She said she would keep demonstrating “until the dictatorship ends”.

The AAPP said around 50 people had been arrested in Sanchaung after the police searched houses, though checks were still being made.

State television MRTV had said earlier: “The government’s patience has run out.” Most people wanted stability and stronger measures to the end the protests, it said.