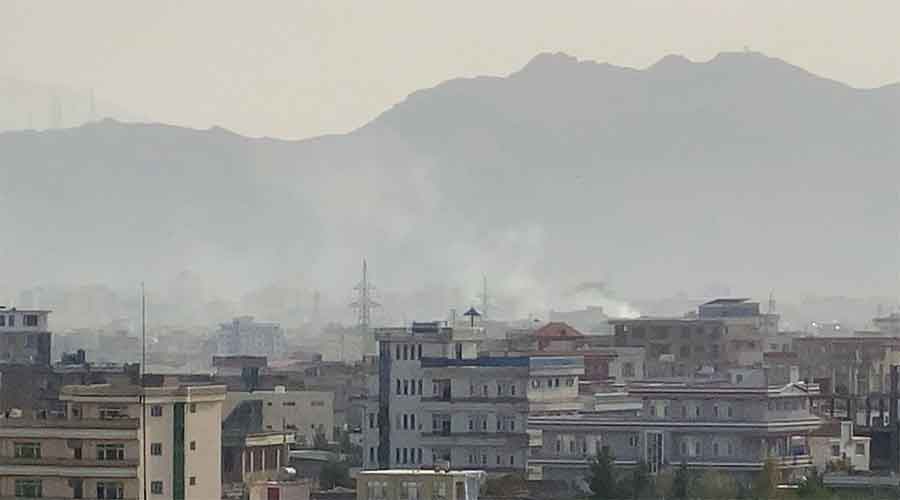 Smoke billowing over Kabul, the capital of Afghanistan, after an explosion near the city’s international airport on Sunday.
Twitter/ @nytimes
Our Bureau   |   Kabul   |   Published 29.08.21, 08:58 PM

A huge explosion was reported from a highly congested residential area near Kabul airport on Sunday, killing a child, reports said. The attack comes a day after the United States killed two ISIS-K men in an airstrike as a 'retaliation' of the deadly blast near Kabul airport of August 26 that killed over 180 and injuring several people, including US, UK and Afghan nationals. This comes hours after US President Joe Biden said that US military commanders have intelligence inputs of another terrorist attack at the Hamid Karzai International Airport within the next 24 to 36 hours. Reports said Sunday's blast was heard from the Gulai area of Khajeh Baghra in the 11th security district. Unconfirmed reports also claimed that the blast might have been caused by a rocket hitting a residential house in the area.

Photos and videos of large plumes of smoke rising from a heavily congested residential area surfaced on social media soon after the blast took place. Initial reports indicate that Sunday's blast was characteristically different from Thursday's blast. Thursday's blast was carried out by a suicide attacker who targeted the crowd outside the Kabul airport, while Sunday's attack, reportedly an airstrike might not have the airport as its target - the rocket hit a residential area near the airport.

JUST IN - Explosion rocks #Kabul. The blast hit a residential building west of the airport. Cause unclear.pic.twitter.com/vzh7T651KM

Just after the blast, the United States said it carried out an airstrike in Kabul, which the Taliban too confirmed and said that the target was one ISIS-K suicide bomber who was on a vehicle, attempting to strike an attack in the airport.

"The incident (US airstrike) happened as police said a rocket struck a neighbourhood just northwest of Kabul's international airport Sunday as the US evacuation there winds down following the Taliban's lightning takeover of the country, killing a child. The two strikes initially appeared to be separate incidents, though information on both remained scarce," the Associated Press reported.

"Our commanders informed me that an attack is highly likely in the next 24-36 hours. I directed them to take every possible measure to prioritise force protection, and ensured that they have all the authorities, resources and plans to protect our men and women on the ground," US president Jor Biden said in a statement.

The US embassy too issued a security alert urging all US citizens in the vicinity of the Kabul airport should leave the area.