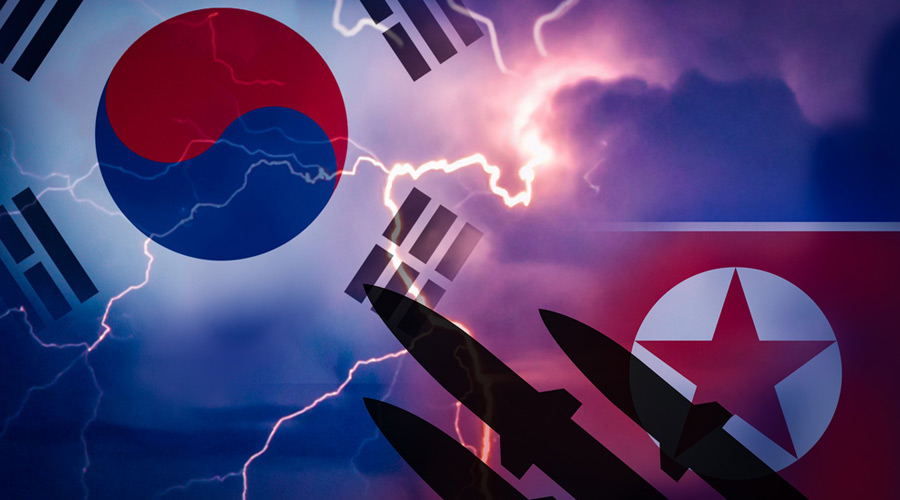 North Korea fired a short-range ballistic missile on Sunday toward its eastern seas, extending a provocative streak in weapons testing as a US aircraft carrier visits South Korea for joint military exercises in response to the North's growing nuclear threat.

South Korea's military condemned North Korea's launch as a serious provocation that violates UN Security Council resolutions and damages the peace and safety of the region and the broader international community.

The US Indo-Pacific Command said the launch did not pose an immediate threat to US personnel or territory, or to our allies, but still highlighted the destabilising impact of North Korea's illicit nuclear weapons and missile programmes.

North Korea has dialed up its testing activities to a record pace in 2022, testing more than 30 ballistic weapons, including its first intercontinental ballistic missiles since 2017, as it continues to expand its military capabilities amid a prolonged stalemate in nuclear diplomacy.

The launch came as the nuclear-powered aircraft carrier USS Ronald Reagan and its strike group arrived in South Korea for the two countries' joint military exercises that aim to show their strength against growing North Korean threats.

In a discussion over the launch Sunday, South Korean Joint Chiefs of Staff chair Gen. Kim Seung-kyum and Gen. Paul LaCamera, an American general who heads the South Korea-US combined forces command in Seoul, reaffirmed plans to bolster the allies' joint defences posture through training, according to South Korea's military.

Japanese Prime Minister Fumio Kishida said in a statement Tokyo is doing its utmost to gather information on North Korea's launch and confirm the safety of ships and aircraft, although there were no immediate reports of damages.

The North Korean threat is also expected to be a key agenda when US Vice President Kamala Harris visits South Korea next week after attending the state funeral in Tokyo of slain former Japanese Prime Minister Shinzo Abe.

North Korea has dialled up its testing activities to a record pace in 2022, testing more than 30 ballistic weapons, including its first intercontinental ballistic missiles since 2017.

North Korea is exploiting a divide in the United Nations Security Council that deepened over Russia's war on Ukraine to speed up arms development.

North Korean leader Kim Jong Un has punctuated his weapons tests with repeated threats that the North would proactively use its nuclear weapons when threatened, increasing security concerns for its conventionally armed rival South Korea.

North Korea has so far rejected US and South Korean calls to return to nuclear diplomacy, which have been stalled since 2019 over disagreements in exchanging the release of US-led sanctions against the North and the North's disarmament steps.

The USS Reagan's arrival in South Korea came after Kim told Pyongyang's rubber-stamp parliament this month that he would never abandon his nuclear weapons and missiles he needs to counter what he perceives as US hostility.

Kim's speech came as North Korean legislators passed a law that enshrined its status as a nuclear power and authorized the preemptive use of nuclear weapons over a broad range of scenarios where the country or its leadership comes under threat, spelling out an escalatory nuclear doctrine.

Speaking to US and South Korean troops Saturday aboard the Reagan, South Korean Defence Minister Lee Jong-sup said the dispatching of US strategic assets to the region shows unwavering US commitment to defend South Korea.

He said the North would be met with an overwhelming response if it attempts to use nuclear weapons, according to a statement by his ministry.

Sunday's test could soon be followed with a more provocative weapons demonstration as South Korean officials said they detected signs that North Korea was preparing to test a missile system designed to be launched from submarines.

The office of South Korean President Yoon Suk Yeol said on Saturday that he was briefed on such developments before his flight back home from a visit to Canada.

On Wednesday, 38 North, a North Korea-focused website, said its analysis of commercial satellite imagery shows multiple barges and other vessels gathered at the eastern port of Sinpo, where North Korea has a major shipyard building submarines.

The report said the North was possibly preparing to launch a new submarine capable of firing ballistic missiles.

North Korea has been pushing hard to be able to fire nuclear-armed missiles from submarines. Such weapons in theory would bolster North Korea's deterrent by ensuring retaliation after absorbing a nuclear attack on land.

Ballistic missile submarines would also add a new maritime threat to the North's growing collection of solid-fuel weapons fired from land vehicles, which are being developed with an apparent aim to overwhelm missile defence systems in South Korea and Japan.