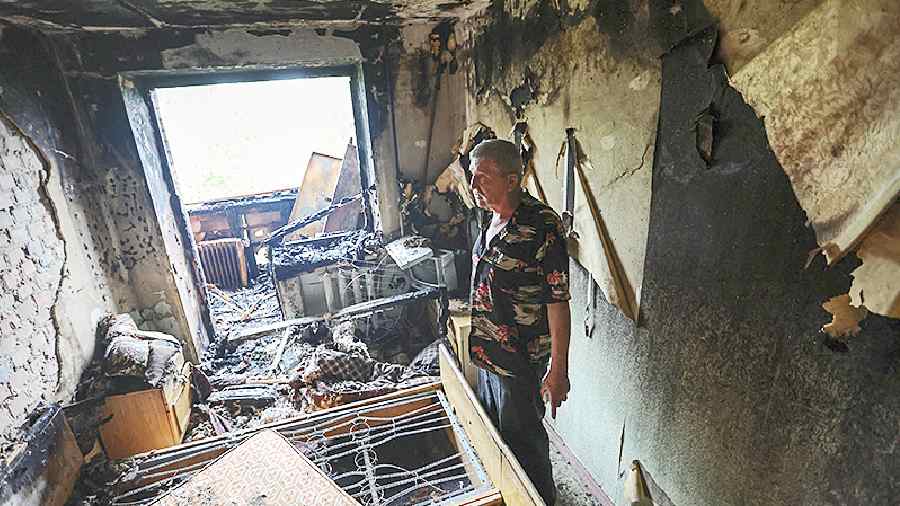 Local resident Gennady Goncharov looks at the damage to his apartment after Russian shelling in Donetsk, Ukraine, on Saturday.
Twitter
Reuters   |   Kyiv   |   Published 26.06.22, 02:23 AM

Russia launched artillery and air strikes on the twin cities of Sievierodonetsk and Lysychansk on Saturday, hitting a chemical plant where hundreds of civilians were trapped, a Ukrainian official said.

“There was an air strike at Lysychansk. Sievierodonetsk was hit by artillery,” Gaidai said on the Telegram messaging app, adding the Azot chemical plant in Sievierodonetsk and the villages of Synetsky and Pavlograd and others were shelled.

He made no mention of casualties at the Azot chemical plant and Reuters could not immediately verify the information. Gaidai said 17 people were evacuated on Friday from Lysychansk by police officers, rescuers and volunteers.

Ukraine said on Friday that its troops had been ordered to retreat from Sievierodentsk, a key battleground city, as there was very little left to defend after weeks of intense fighting. “During the last (several) days, an operation was conducted to withdraw our troops,” Kharatin Starskyi, the press officer of a National Guard brigade, said on Saturday.

Starskyi, who had been in Sievierodonetsk, told morning television that the flow of information about the withdrawal was delayed to protect troops on the ground. The retreat marks the biggest reversal for Ukraine since the loss of the southern port of Mariupol in May.

News of the withdrawal on Friday came four months to the day since Russian President Vladimir Putin sent tens of thousands of troops over the border, unleashing a conflict that has killed thousands, uprooted millions and reduced whole cities to rubble.

The latest Russian advances appeared to bring the Kremlin closer to taking full control of Luhansk, one of Moscow’s stated war objectives and sets the stage for Lysychansk to become the next main focus of fighting.

Vitaly Kiselev, an official in the Interior Ministry of the separatist Luhansk People’s Republic told Russia’s TASS news agency that it would take another week and a half to secure full control of Lysychansk.

On Saturday, Russia again launched missile strikes on military and civilian infrastructure in the north near Ukraine’s second-biggest city Kharkiv through to Sievierodonetsk in the east, said the general staff of Ukraine’s Armed Forces.