Suspect dies after stabbing himself; Students, aged 6 to 12, were waiting for bus when raid took place 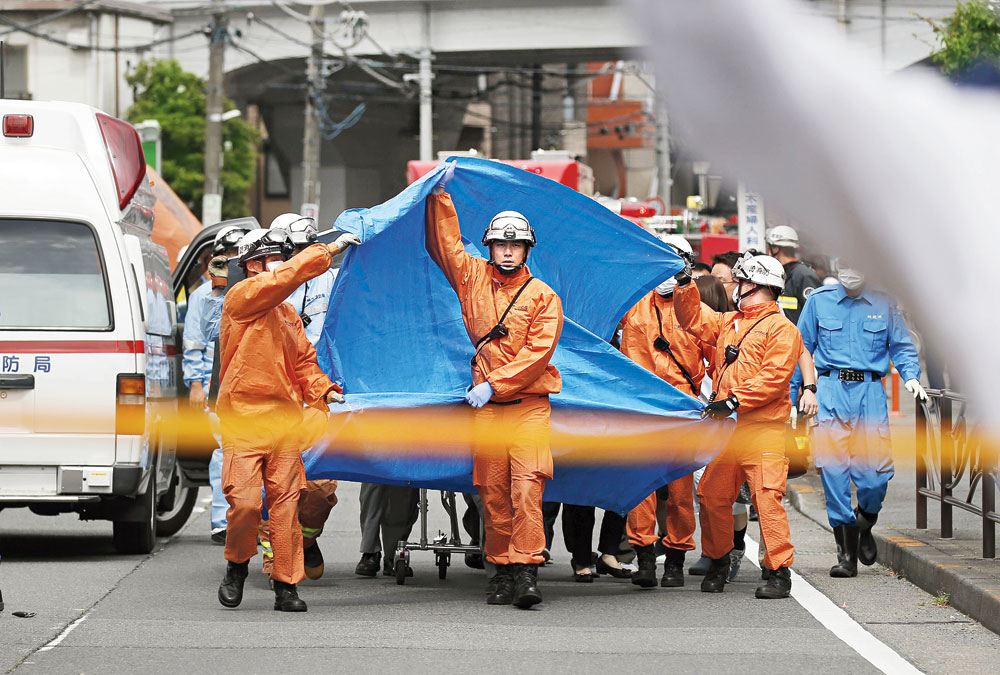 A knife-wielding man slashed at a group of schoolgirls at a bus stop in Japan on Tuesday, killing one girl and an adult who may have been the father of one child, media reported.

Sixteen other girls between the ages of 6 and 12 and a woman were wounded in the attack by a middle-aged man who died later of a self-inflicted wound, broadcaster NHK said, citing police.

Police said an 11-year-old girl and a man, 39, were killed, but declined to give further details. The 39-year-old, a foreign ministry official, was believed to be the father of one of the girls, NHK said.

The girls were students at Caritas Gakuen, a Catholic school in Kawasaki city, south of Tokyo, and were waiting to board their school bus when the suspect attacked, school officials said at a news conference.

“I’m extremely angry and feel the utmost regret that this brutal act caused harm to innocent children and to their guardians who lovingly nurtured them,” said school director Tetsuro Saito. The motive for the attack was unclear but there were no immediate fears of a wider security threat.

The Asahi and Nikkei newspapers quoted a witness saying he saw a middle-aged man with a knife scream,“I’ll kill you!” Other media reports said the man had knives in both hands.

Satoru Shitori, the school headmaster, said he was near the bus stop at the time of the attack and did not hear the man shout anything.

“He did not speak, cry out or shout. He did not say a word. That’s why children did not notice” the suspect, who attacked them from behind, Shitori said.

“If he had come shouting, the children might have been able to escape,” he said.

The suspect, a resident of Kawasaki, was found unconscious near the scene and died later from a self-inflicted stab wound to his neck, NHK reported, citing police.

Prime Minister Shinzo Abe described the attack as “extremely harrowing” and promised to tighten security for children commuting to and from school.

TV footage showed scores of police officers and emergency vehicles at the scene, with large areas cordoned off. A witness told NHK he saw people lying on the ground covered in blood and a police officer was hosing down the sidewalk.

Violent crime is relatively rare in Japan but occasional high-profile incidents have shocked the nation.

In 2016, a man armed with a knife broke into a facility for the disabled in a small town near Tokyo and killed 19 patients in their sleep. And in 2010, more than a dozen people were injured in a stabbing spree on a school bus and a commuter bus in a Tokyo suburb.

Two children were killed and a dozen injured in western Japan earlier this month after a car involved in an accident with another vehicle skidded into a nursery school group out for a walk with their teachers.

In 2018, a man was arrested in central Japan after stabbing one person to death and injuring two others aboard a bullet train, an attack that prompted new security measures on the famed rail service.