By noon on Monday, the soundtrack of incoming and outgoing artillery fire around the city had reached high volume 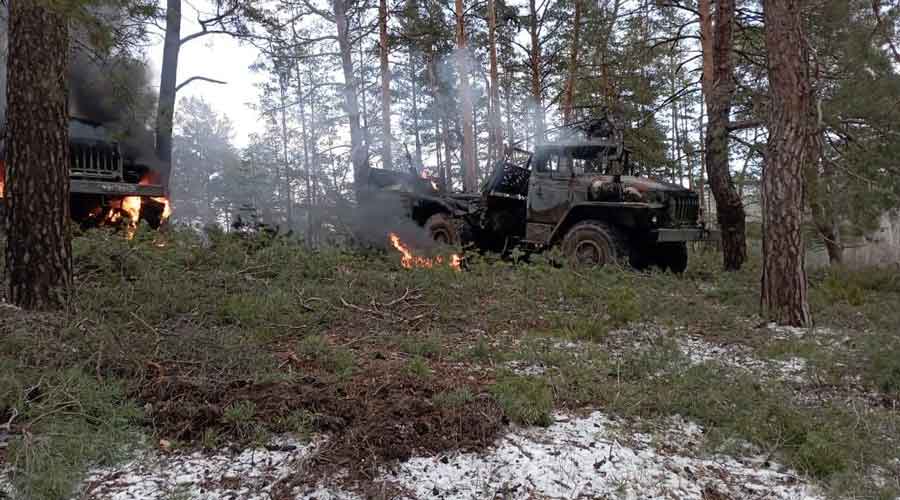 The remains of a Russian Tigr fighting vehicle sat smouldering on the side of the road as Ukrainian troops lounged outside their trenches smoking cigarettes. Nearby, a group of villagers was tinkering with a captured T-90 tank, trying to get it running again so that the Ukrainian army might put it to use.

For three days, Russian forces had fought to take Mykolaiv, but by Sunday, Ukrainian troops had driven them back from the city limits and retaken the airport, halting the Russian advance along the Black Sea, at least temporarily.

The scope of the battle was not yet clear. Mykolaiv has emerged as a key battleground in Russia’s effort to capture Ukraine’s southern coast, which would cut off the country’s access to the Black Sea. By noon on Monday, the soundtrack of incoming and outgoing artillery fire around the city had reached high volume.

On Sunday, an exhausted Col Sviatoslav Stetsenko of the Ukrainian Army’s 59th Brigade said in an interview: “Few expected such strength from our people because, when you haven’t slept for three days, and when you only have one dry ration because the rest burned up, when it’s negative temperature out and there is nothing to warm you, and when you are constantly in the fight, believe me, it is physically very difficult.

“But our people endured this.”

The thwomp of artillery in the distance suggested that the Ukrainians had not pushed them back that far.

But the unexpected Ukrainian success in defending this critical port, about 104km from Odessa, underscores two emerging trends in the war.

Russia’s failure to seize Mykolaiv and other cities quickly, as President Vladimir Putin appears to have intended, is largely a function of its military’s faltering performance. Russian forces have suffered from logistical snafus, baffling tactical decisions and low morale.

But it is the fierce and, according to many analysts, unexpectedly capable defence by the significantly outgunned Ukrainian forces that has largely stalled the Russian advance and, for now, prevented Mykolaiv from falling into Russian hands.

For three days, troops from the Ukrainian army’s 59th Brigade, together with other military and territorial defence units, have been defending Mykolaiv from Russian attack along several fronts, facing down punishing artillery barrages, helicopter attacks and rocket strikes, some of which have hit civilian neighbourhoods.

That the Ukrainian forces still exist and are able to mount a defence after 11 days of war is by itself a major feat. Most military analysts and even some Ukrainian generals predicted that if Russia mounted a full-scale invasion, Ukraine’s military, which is dwarfed by its counterpart by almost every measure, would not last more than a few days or even hours.

But by taking advantage of their local knowledge, attacking lumbering Russian troop columns with small, lithe units and using western military assistance like anti-tank grenades to maximum effect, Ukrainian forces have managed to slow, if not stop, the Russian advance.

“We fight them day and night; we don’t let them sleep,” said Maj. Gen. Dmitry Marchenko, the commander of the forces defending Mykolaiv. “They get up in the morning disoriented, tired. Their moral, psychological state is simply broken.”

The governor of the Mykolaiv region, Vitaliy Kim, said that Russian forces were surrendering in unexpected numbers and had abandoned so much equipment that he did not have enough military and municipal workers to collect it all.

The time for such attitudes may be limited. A senior Ukrainian military official, speaking on the condition of anonymity to discuss sensitive military assessments, predicted Monday’s Russian counterattack. Russia still has many more troops and advanced weapons than Ukraine, and its air force now dominates the skies.

Despite near-frantic warnings from the White House of an imminent Russian invasion in the weeks before it actually happened on February 24, the initial attack took Colonel Stetsenko’s unit by surprise, he said. His brigade was at a training exercise near the border with Crimea outside a town called Oleshky and only half assembled when it received the order to prepare for battle.

“If we had received the order three or four days before, we could have prepared, dug trenches,” he said.

That delay nearly led to his brigade’s destruction in the first hours of the war, he said.

The Russian force that poured out of Crimea was five times the size of his Ukrainian unit and quickly overwhelmed it. His brigade had no air support and few functional anti-aircraft systems, because most had been sent to Kyiv to defend the capital. Much of the brigade’s tanks and armoured fighting vehicles were destroyed in the initial attack by Russian aviation.

The brigade’s commander, Col Oleksandr Vinogradov, had lost touch with military leadership and was forced to make decisions on the fly, said Col Stetsenko, who was with the commander throughout. Encircled and suffering heavy losses from strikes by Russian fighter jets, Col Vinogradov ordered his remaining tank and artillery units to punch a hole through a unit of Russian airborne assault troops that had positioned itself at the Ukrainian brigade’s rear.

The manoeuvre allowed the main Ukrainian fighting force to cross a bridge over the Dnieper River and retreat west about 72km to Mykolaiv, where it could regroup and link up with other units to continue the fight.

“The fighter jets of the enemy attacked our tanks, several tanks were hit and burned, and the rest remained and did not flee,” Col Stetsenko said. “They knew that behind them were other people, and they gave up their lives to break through the bridge to dig in on the other bank.”

The tactic worked, but the costs were steep. By falling back to Mykolaiv, Col Stetsenko’s brigade had to sacrifice Kherson, which on March 2 became the first major city to fall to the Russian forces. They had no choice, Col Stetsenko said. If they had tried to defend Kherson, Russian forces could have flanked them and cut them off, opening a road to the west, and to Odessa.

With a white, closely trimmed beard and deep crevices around his mouth where dimples might once have been, Col Stetsenko cuts an unusual figure on the battlefield. He is 56 and had been retired from the military for a decade when he decided to re-enlist in 2020. By then, Ukrainian forces were already fighting a Kremlin-backed insurgency in eastern Ukraine, and Col Stetsenko felt he needed to do his part.

“I knew that many people who had already served were tired,” he said. “It is difficult to live for so long without their families, and we needed people to serve. So I went to the military recruiting centre and signed a contract.”

Such dedication goes some way to explaining the fierce resistance displayed by Ukrainian soldiers on the battlefield, as Russian troops seem to be surrendering in large numbers. An acute knowledge of the Russian military gives the Ukrainian forces another advantage.

Col Stetsenko served with Russians as a young soldier in the Soviet military in the 1980s, when he was posted to the Far East. Now, soldiers based at some of the same Russian garrisons where he spent his youth are fighting against him.

“They are now my enemy,” he said. “And each one of them who comes here with arms, who comes here as an invader, I will do everything I can to ensure that he remains as fertiliser for our land.”

On Sunday evening, Col Stetsenko returned to the front line outside the city where the sounds of battle swelled once more as Russian troops regrouped for a counterattack. That has been the way of this war, nearly a week and a half in, a violent ebb and flow that has centred on a few key cities like Kyiv and Kharkiv.

In Mykolaiv, Col Stetsenko and his comrades won the city a day of rest. The sun came out for a few hours in the morning, followed by a light snow in the afternoon. Streets that were deserted a few days ago were populated again with mothers pushing strollers and people walking dogs.

On the outskirts where fighting had been most intense, Nikolai Bilyashchat, 54, had joined a few of his neighbours to work on the Russian T-90 tank, which now sported a Ukrainian flag. It had been damaged when Ukrainian forces blew up the bridge it was driving over, and now only the treads on its left side worked properly.

“I’ve been a driver my whole life, so I know a little bit about mechanics,” Bilyashchat said. “Though I don’t know a thing about tanks.”