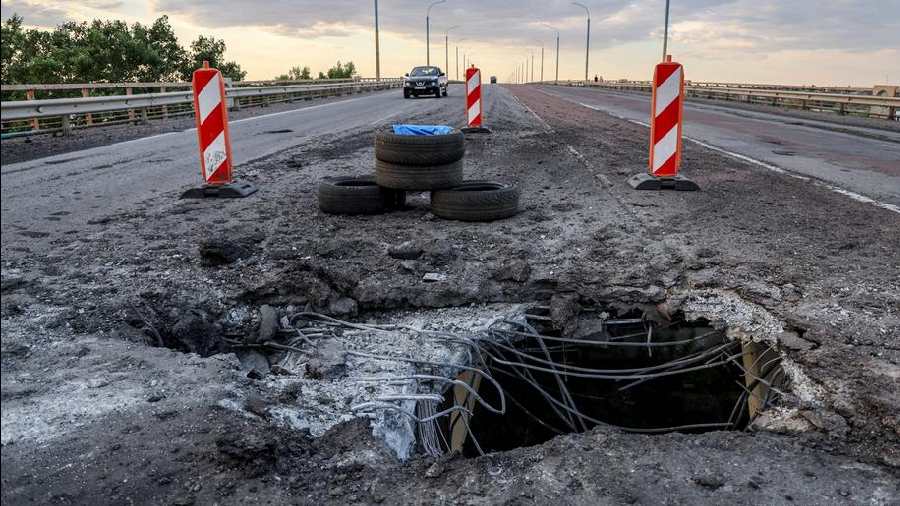 Ukraine says it is making headway in its counteroffensive in the Russian-held Kherson region
Deutsche Welle
Deutsche Welle   |   Published 30.07.22, 06:28 PM

Ukraine has announced making advances in the Russian-held Kherson region, claiming it had killed scores of Russian soldiers, as it attempts to retake the key region for Russia's supply lines.

The Ukrainian military's southern command said on Saturday that they were able to cut rail traffic to Kherson over the Dnieper River. If confirmed, the move would separate Russian forces stationed west of the river from eastern supplies.

Ukrainian counteroffensive also destroyed two ammunition dumps, Reuters cited the military as saying. Over 100 Russian soldiers were killed in the fighting in the region on Friday, and seven tanks were destroyed, Ukraine said.

The reports have not been independently verified.

The first deputy head of the Kherson regional council, Yuri Sobolevsky, wrote on Telegram that the "Ukrainian army is pouring it on against the Russians and this is only the beginning." He urged residents to steer clear of Russian ammunition dumps.

In recent weeks, Ukraine has been making use of much-needed long-range missile systems supplied from the West to make advances in the Kherson region, the first to be captured by Russian forces after they launched the invasion at the end of February.

British defense officials believe that the destruction of three bridges crossing over the Dnieper has exposed Russian forces on the west bank of the river.

Here are the other main headlines from the war in Ukraine on July 30.

Britain’s foreign intelligence agency (MI6) chief Richard Moore said on Saturday that Russia was "running out of steam" in its war on Ukraine.

His comment came in reply to a Twitter statement by the British military, which reiterated support for Ukraine.

The UK Ministry of Defense, meanwhile, said the Kremlin was "growing desperate."

"Russia has lost tens of thousands of soldiers and is using Soviet-era weapons," the ministry said. "Their outdated missiles are killing and injuring innocent Ukrainians. Russia won't win this unjust war."

The British statements come as Ukraine claims its troops have killed scores of Russian soldiers while attempting to retake occupied territory in the Kherson region.

The statements also echo comments by US former CIA chief David Petraeus, who believes Ukraine — armed with consistently supplied Western resources — has high chances of winning its war against Russia.

Rockets hit two residential districts in the southern city of Mykolaiv overnight, killing one person and injuring six others, the city’s mayor said.

The strike left "windows and doors broken, and balconies destroyed," AFP quoted the mayor as saying.

Mykolaiv lies some 100 kilometers (62 miles) northwest of Kherson, where Ukrainian forces are pushing the Russians to retake the region which fell into Russian control shortly after the launch of the invasion at the end of February.

The port city of Mykolaiv has been a daily Russian target. On Friday, an attack near a bus stop killed seven.

Elsewhere in the east, Russian rockets struck a Kharkiv school building overnight, in addition to an attack on a bus station in the city of Sloviansk, the AP news agency reported.

Russia could be preparing to hold referendum in occupied territories

"Local authorities are likely coercing the population into disclosing personal details in order to compose voting registers," the British Defense Ministry said on Twitter. It added that Russia categorizes the areas it occupies in Ukraine as under interim "civil-military administration."

The British military update also said that Ukraine was repelling small-scale Russian attacks in eastern Donbas, as well as pushing back Russian forces in Kherson.

It reported that Russia potentially established two pontoon bridges and a ferry system in Kherson to regain contact with its supply lines east of the Dnieper River, after Ukraine damaged bridges crossing the river in recent strikes.

The former head of the US Central Intelligence Agency (CIA), David Petraeus, believes Ukraine has high chances of victory in its war against Russia.

It seems "increasingly likely that Ukrainian forces will be able to recapture much, if not all, of the areas that have been occupied by Russian forces in recent months," he told Germany’s Bild newspaper.

Petraeus, however, stressed the importance of NATO and other Western states' continued supply of resources to Ukraine "at the current pace." He described this as the prerequisite to Ukraine's success.

Petraeus believes that leaders of Western nations now realize how Russia’s victory in the war would be "catastrophic for European security."

Among the US' most prominent military representatives, Petraeus served as supreme commander of US troops in Iraq and NATO forces in Afghanistan. He was also head of the US Central Command, before serving as head of the CIA.

The US ambassador to the UN accused Russia of seeking to dismantle Ukraine and "dissolve it from the world map entirely."

In an address to the UN Security Council, Linda Thomas-Greenfield said the US was witnessing signs of Russian steps to annex all of the eastern Ukrainian regions, listing Donetsk, Luhansk, southern Kherson and Zaporizhzhia.

Greenfield cited the installation of "illegitimate proxy officials in Russian-held areas, with the goal of holding referenda or decree to join Russia" as evidence supporting its accusation.

She also referred to recent statements by Russian Foreign Minister Sergey Lavrov, in which he said that his country's goal in Ukraine was to free its people from its "unacceptable regime."

Russia's deputy UN ambassador Dmitry Polyansky, meanwhile, told the council that "the de-Nazification and demilitarization of Ukraine will be carried out in full," the AP news agency reported.

He stressed that any threats to Russia or to the Donbas region or Russian-held Ukrainian territories must be obliterated.

More on the war in Ukraine

Russia and Ukraine have exchanged blame for the shelling of a Ukrainian prisoners of war (POW) jail. Ukrainian President Volodymyr Zelenskyy described the attack as a Russian "war crime," while Russia's Defense Ministry said Kyiv was behind it. Read the story here.

In the five months since Russia launched its invasion of Ukraine, statements by Russian representatives have repeatedly shifted the goalposts with regard to Moscow's war aims. DW has this summary of the main changes.

Conservative politicians and pundits in the US have criticized the wife of Ukrainian President Volodymyr Zelenskyy, Olena Zelenska, for featuring in a cover story of the magazine Vogue. But Ukrainians have welcomed the publicity it has given to their fight against invading Russian forces. DW looks at both sides of the argument.