Troop training, arms sales and mercenaries are the pillars of Moscow's security support in Africa 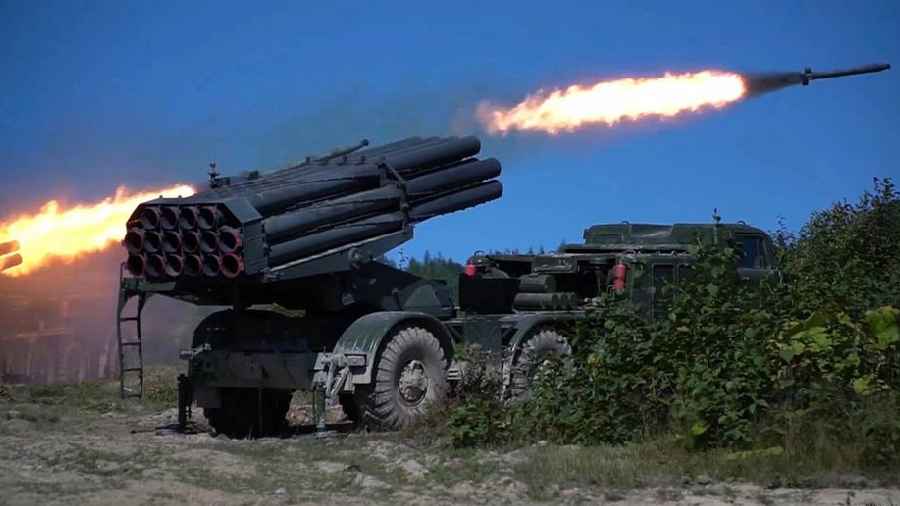 Russia and Algeria have kicked off joint military maneuvers in a desert region in the northwest of Algeria. With the participation of about 80 soldiers from Russian special forces, the troops are simulating the detection and elimination of terrorist groups during the weekslong exercises.

It's the first time that soldiers from both countries have trained together on Algerian soil, and it's the third time this year that Russia and Algeria have held joint drills. Russian warships docked in Algerian waters for a joint naval exercise in October, while in September Algerian troops took part in Russia's massive Vostok military exercise as the only country from Africa.

Algeria is one of Russia's most important military allies in Africa. It's also the largest customer of Russian weapons on the continent, followed by Egypt, Sudan and Angola, according to the Stockholm International Peace Research Institute (SIPRI), which tracks armaments.

Algeria's armed forces are almost entirely equipped with Russian-made weapons and military systems. Under the latest deal, sealed in 2021, Algeria is set to buy $7 billion (€6.7 billion) worth of Russian defense equipment.

Just under half of the military equipment in Africa is supplied by Russia. Not only does Russia have strong historical ties from when it armed African nations during their liberation struggles in the 50s and 60s, but Russian weapons deals also come with fewer political demands.

For example, when the US, citing human rights concerns, pulled out of a 2014 deal with Nigeria to supply the country with attack helicopters, Nigeria turned to Russia instead, as did Egypt when the US cut arms supplies in 2013 after a coup.

Russia's current exports to Africa include major arms, such as tanks, warships, combat jets, helicopters, and small arms, such as pistols and assault rifles, according to a recent article on the effect of the Ukraine war on Africa's armaments by defense analyst Moses B. Khanyile.

Risk of guns without ammunition

Experts say that Algeria and other African nations' reliance on Russian armaments is now putting their defense systems at risk.

Russia's defense industries are already scrambling to replenish its own weapons stocks, depleted by the war in Ukraine. On top of this, the country's access to advanced components used in its weapons systems is restricted due to sanctions.

That means they may be unable to fulfill orders in the pipeline, said Khanyile, the director of the Centre for Military Studies at South Africa's Stellenbosch University.

Then there are the issues of maintenance and repair. "You have a whole bunch of African countries like Algeria who are solely or predominantly reliant on Russia for their military assets," he told DW in an interview from Stellenbosch. "These have to be maintained and fixed or replaced if something goes wrong; they need spares for them."

But export controls restrict the availability of parts while sanctions stop the manufacturers flying in expert support from Russia, Khanyile said. Russia's suspension from global finance systems also makes it "very difficult" for African clients to receive and pay for such services from Moscow.

An analysis of Russia's arms exports in the wake of the Ukraine war by Foreign Policy, a US magazine, came to a similar conclusion, saying it expected "significant slowdowns in the Kremlin's arms deliveries into Africa" and that sanctions had "already eroded ... the Kremlin's ability to restock complex parts."

There's also the threat of US sanctions against countries buying Russian weapons. For instance, US Senator Marco Rubio called for sanctions against Algeria in September under the Countering America's Adversaries Through Sanctions Act because the "influx of money" from its arms deal would "further enable Russia's war machine in Ukraine."

The second pillar of Russia's defense diplomacy is the provision of private military contractors, often to countries that count as Africa's most fragile states. For example, mercenaries from the Wagner group, a Russian private military company funded by an oligarch close to Putin, first appeared in Libya in 2015, followed by Sudan in 2016 and the Central African Republic (CAR) in 2018.

In CAR, the mercenaries initially acted as trainers, then extended their influence into politics, intelligence and resources. In return for propping up the regime of President Faustin-Archange Touadera, Russian mining companies have been given gold and diamond mining concessions as well as forestry rights.

Wagner has also been active in Chad, Nigeria, DR Congo, South Sudan, Mozambique, Zimbabwe, Botswana and Madagascar, according to the Center for Strategic and International Studies, a US think tank.

Most recently, some 1,000 Wagner mercenaries have been operating alongside local forces in Mali for a reported cost of more than $10 million a month.

Mercenaries are a lucrative business

Given the profitable nature of these dealings, defense analyst Khanyile doesn't see Russia pulling its mercenaries back home to fight in Ukraine even though it's scrabbling for manpower.

"If they are propping up insecure regimes in Africa, if they are securing mineral rights and they are making and generating income for the mother country, there is no reason why they should withdraw," Khanyile said.

Ovigwe Eguegu, a policy analyst at the international consultancy Development Reimagined, has a similar reasoning. "It is a service being paid for," he said, referring to the private military contractors. Since the Russian state has a vested interest in these African countries, it wouldn't pull out the private contractors.

Cost of partnering with Russia

Eguegu, who has just published a paper exploring Russia's private military diplomacy in Africa, says the danger for African nations is that, since the war with Ukraine started in February, partnering with Russia comes at a "high diplomatic cost."

"If an African country choses Russia as it's preferred security partner, it is no longer considered as a suitable partner by Western countries," he told DW. "If you go with Russia, you will be isolated."

Regardless of the war in Ukraine, he believes Russia will continue to provide "regime security" to certain African nations as it is in Russia's strategic interests.

But, even if Russia maintains these security commitments despite its military challenges at home, he warns, this brings few long-term benefits.

"Russia does not provide a comprehensive solution to African security problems," he said. "What it does is to provides access to relatively cheaper weapons and training for troops. There's little to no effort on security sector reform or peacebuilding."