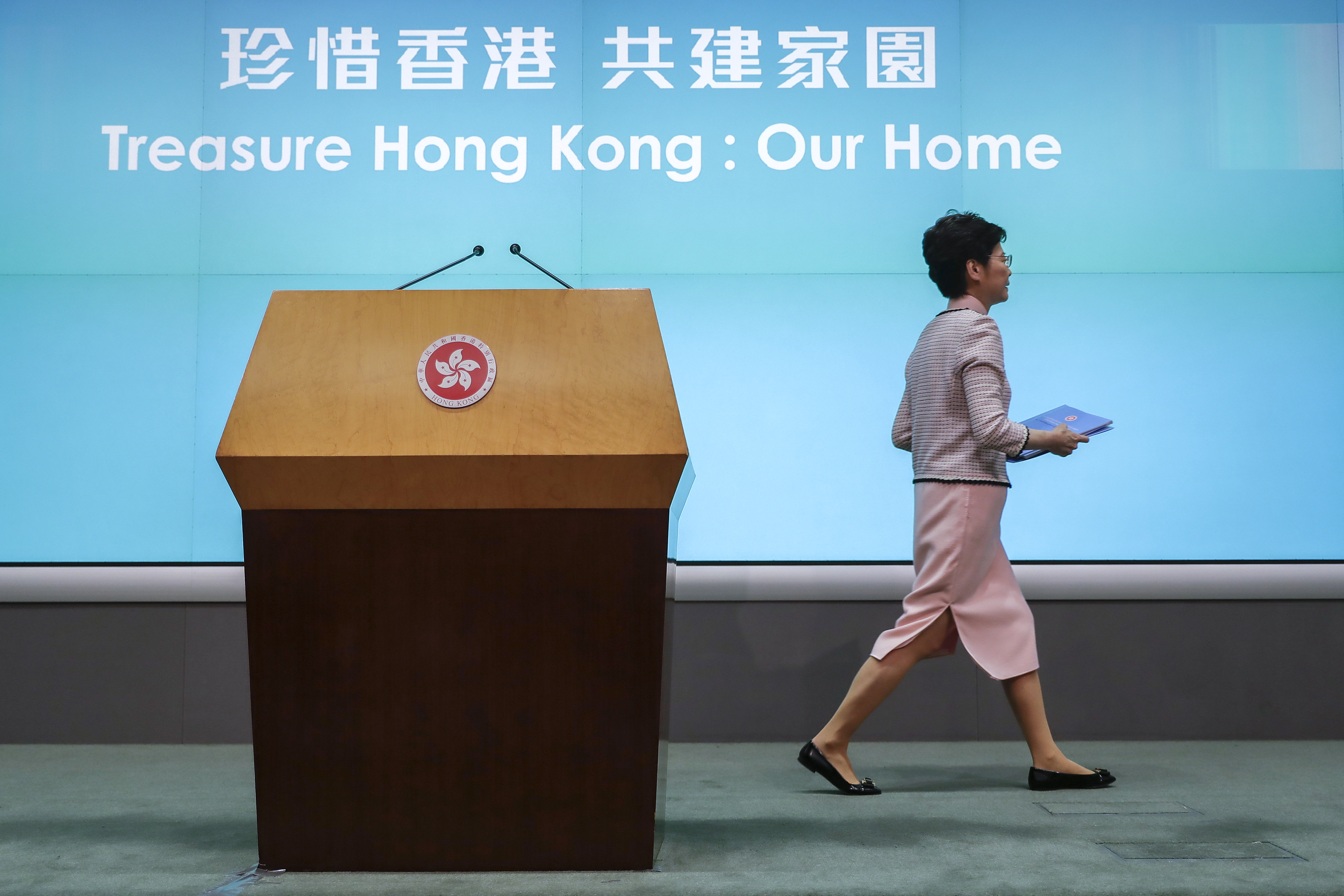 Hong Kong leader Carrie Lam had to abandon her policy speech because of jeering lawmakers on Wednesday but later offered no direct olive branch to pro-democracy protesters, hoping instead to ease resentment by building more public housing.

Lam, who had to broadcast the annual address via a video link after the rowdy scenes in the Legislative Council, had hoped to try to restore confidence in her administration after four months of often violent anti-government and anti-China protests.She gave up initial attempts to deliver the address after pro-democracy lawmakers called out for “five demands, not one less” and projected the protest rallying cry on to a backdrop behind her.

The demands include universal suffrage for the Chinese-ruled city and an independent inquiry into what they say has been excessive force by police in dealing with the unrest.Protesters have trashed government buildings, including the Legislative Council, daubed businesses seen as pro-China with graffiti, set street fires and thrown petrol bombs at police who have responded with water canon, tear gas, rubber bullets and several live rounds.

Police have arrested more than 2,300 people since June. Thousands have been wounded, including two shot by live rounds.In her policy statement, Lam was unapologetic about her government’s response to the protests, which has included introducing British colonial-era emergency laws this month.

“Any acts that advocate Hong Kong’s independence and threaten the country’s sovereignty, security and development interests will not be tolerated,” she said.“Despite the stormy times and overwhelming difficulties Hong Kong is experiencing, I believe that so long as we accurately adhere to the principle of ‘one country, two systems’, we will be able to get out of the impasse.”

The protesters are angry at what they see as Beijing’s tightening grip on Hong Kong, which was guaranteed 50 years of freedoms under the “one country, two systems” when Britain returned the city to China in 1997.

Beijing rejects the charge and accuses western countries, especially the US and Britain, of stirring up trouble. The unrest poses the biggest popular challenge to Chinese President Xi Jinping since he came to power in 2012.

He has warned that any attempt to divide China would be crushed. A Norwegian lawmaker, Guri Melby, tweeted that she had nominated the Hong Kong people for the 2020 Nobel Peace Prize for their stand for freedom of speech and democracy.

Lam later told a news conference that she had held “closed door” meetings with some members of the protest movement and when the unrest ended she would hold more. Pro-democracy lawmaker Tanya Chan said Lam should resign.

A leading face of Hong Kong’s pro-democracy movement, Jimmy Sham, was rushed to hospital covered in blood late on Wednesday after being attacked by unidentified thugs with hammers.