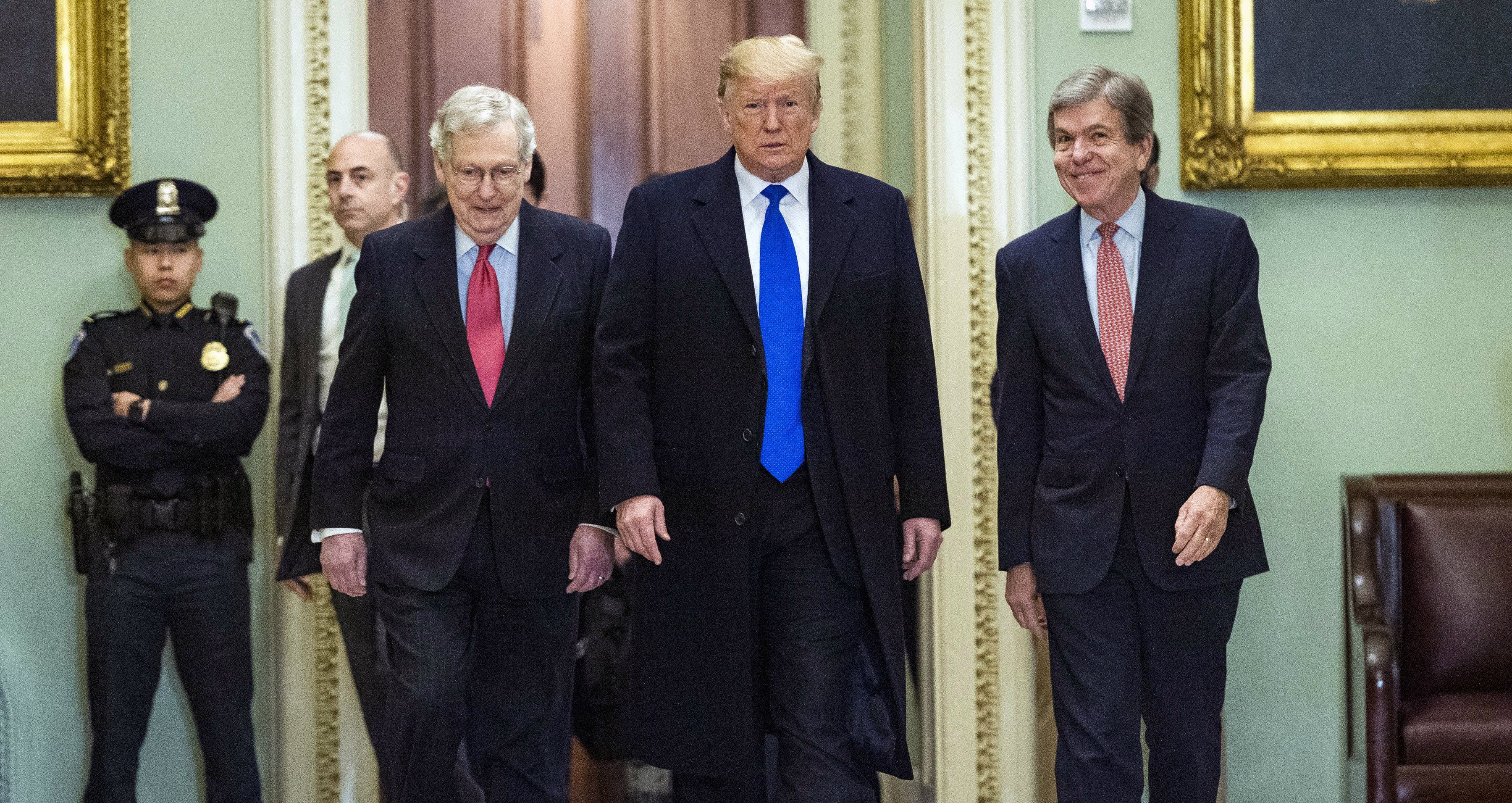 Donald Trump is flanked by Senate Majority Leader Mitch McConnell (left) and Sen. Roy Blunt as he arrives for a luncheon with Senate Republicans at the Capitol on Tuesday.
The New York Times
Peter Baker/NYTNS   |   Washington   |   Published 27.03.19, 07:43 AM

After Watergate, it was unthinkable that a President would fire an FBI director who was investigating him or his associates. Or force out an attorney general for failing to protect him from an investigation. Or dangle pardons before potential witnesses against him.

But the end of the inquiry by special counsel Robert Mueller made clear that President Donald Trump had successfully thrown out the unwritten rules that had bound other chief executives in the 45 years since President Richard Nixon resigned under fire, effectively expanding presidential power in a dramatic way.

Mueller’s decision to not take a position on whether Trump’s many norm-shattering interventions in the law enforcement system constituted obstruction of justice means that future occupants of the White House will feel entitled to take similar actions. More than perhaps any other outcome of the Mueller investigation, this may become its most enduring legacy.

To Trump and his allies, this is the correct result, a restoration of the rightful authority of a President over the executive branch as stipulated in the Constitution. Under the theory that Trump’s legal team advanced, the Justice Department and the FBI work for the President and, therefore, a President can order investigations opened or closed, fire prosecutors, grant pardons or otherwise use his constitutional power even if it seems overtly self-interested or political.

It was that view that Attorney General William Barr embraced in a 19-page memo he drafted last year as a private citizen and sent unsolicited to the White House months before Trump appointed him to lead the Justice Department. And it was that same view that informed Barr’s decision on Sunday to make the ruling that Mueller would not and declare that Trump had not obstructed justice.

“I celebrate this; I salute this; I think it is a very good thing because the possibility of having the President investigated because of his exercise of his core constitutional powers was a very, very bad thing to have out there,” said David B. Rivkin Jr., a former Republican Justice Department official who has written on the topic. “It debilitates the government at all levels.”


I celebrate this; I salute this... the possibility of having the President investigated because of his exercise of his core constitutional powers was a very, very bad thing to have out there. It debilitates the government at all levels.
- David B. Rivkin Jr., former Republican Justice Department official


To Trump’s critics, however, the development represents a dangerous degradation of the rule of law, handing a President almost complete leeway to thwart any effort by federal law enforcement authorities to scrutinise his actions almost as if he were a king.

“They’re just trying to create a new kind of monarchy in the United States and have a President who’s not accountable,” said former Rep. Elizabeth Holtzman, a New York Democrat who sat on the House Judiciary Committee that passed articles of impeachment against Nixon for obstruction of justice and other charges before his resignation in August 1974.

The question of obstruction has emerged as the most debated part of Mueller’s investigation. According to a summary by Barr, Mueller did not establish a conspiracy between Trump and Russia to influence the 2016 presidential campaign, but when it came to obstruction of justice, the special counsel neither accused the president of a crime nor exonerated him.

At the heart of the obstruction question is when a President’s use of his otherwise legitimate authority under the Constitution becomes an abuse of power. When the House Judiciary Committee approved three articles of impeachment against Nixon for covering up the Watergate burglary and other crimes, it asserted that “he knowingly misused the executive power by interfering with agencies of the executive branch”, including the FBI and the Justice Department.

In effect, the result was to draw a line that subsequent Presidents steered clear of, no matter how frustrated they might be at times with investigators pursuing them. To prevent a repeat of Nixon’s actions, including his order firing the Watergate special prosecutor, Congress enacted a law creating an independent counsel who would not report to the president.

But both parties grew disenchanted with independent counsels after the experience of Presidents Ronald Reagan and George Bush during Iran-Contra and Bill Clinton during Whitewater and the Monica Lewinsky affair, so they let the law expire. When Presidents did use their pardon power in cases close to them — Bush granting clemency to Caspar Weinberger shortly before leaving office and Clinton doing the same with Susan McDougal in his last hours in the White House — it was considered an egregious violation of the norms.

In the absence of an independent counsel law, Mueller was appointed as a special prosecutor who still answered to the Justice Department, meaning he had less latitude, could not indict the president even if he thought it merited and could be fired by the president he was investigating, as Trump threatened to do repeatedly.

“What we tried to do in the wake of Watergate was control a President who had accrued excessive power,” Holtzman said. “And these reforms seem to be going by the wayside, and we’re seeing the consequences. It’s really a disastrous situation for our democracy.”


What we tried to do in the wake of Watergate was control a President who had accrued excessive power. And these reforms seem to be going by the wayside, and we’re seeing the consequences. It’s really a disastrous situation for our democracy.
- Elizabeth Holtzman, former Democrat Representative


Undaunted by post-Watergate conventions, Trump fired James Comey, the FBI director, after Comey rebuffed his requests for loyalty and to drop an investigation into Michael T. Flynn, the president’s former national security adviser, according to contemporaneous memos kept by Comey.

Trump likewise railed against Attorney General Jeff Sessions for recusing himself from the Russia investigation because it meant that his own appointee was not able to rein in the inquiry. Publicly and privately, he berated Sessions for not investigating his political enemies, including Hillary Clinton. He eventually fired Sessions the day after the November midterm elections.

And Trump has publicly left open the possibility that he might pardon some of those who came under scrutiny by Mueller or New York prosecutors, while praising associates who refused to cooperate and denouncing those who did as “rats”.

For nearly two years, Trump’s legal team has taken an expansive view of the executive powers afforded to the president under Article II of the Constitution, insisting that Trump’s actions fell within those boundaries no matter what his motive.

Their case was made most succinctly in a confidential letter written in January 2018 to Mueller by the President’s lawyers at the time, John M. Dowd and Jay Sekulow. In the letter, they argued that by definition Trump could not obstruct justice because his powers were so broad as President that he could “if he wished, terminate the inquiry, or even exercise his power to pardon.”

“Every action that the president took was taken with full constitutional authority pursuant to Article II of the United States Constitution,” they added. “As such, these actions cannot constitute obstruction, whether viewed separately or even as a totality.”

Barr expressed a similar view in his 19-page memo written last summer and sent to the White House. Trump later picked him to replace Sessions.

Since Mueller’s report remains undisclosed, it is not known how much these constitutional arguments weighed in his decision not to make a finding on obstruction. Barr argued that since there was no underlying crime of conspiracy, it would be harder to prove a corrupt intent to obstruct.

Some expressed skepticism that the line has necessarily moved. “I don’t think that means that the definition of obstruction has changed,” said Timothy Naftali, a New York University professor and former director of the Nixon presidential library. “What I think we may find is the evidence wasn’t sufficient to take on the huge battle of indicting a President.”

Democrats not giving up on Russia probe

Trump declares victory now, but legal perils far from over