Advertisement
Home / World / Riddle: How did he hear the whimper?

Riddle: How did he hear the whimper? 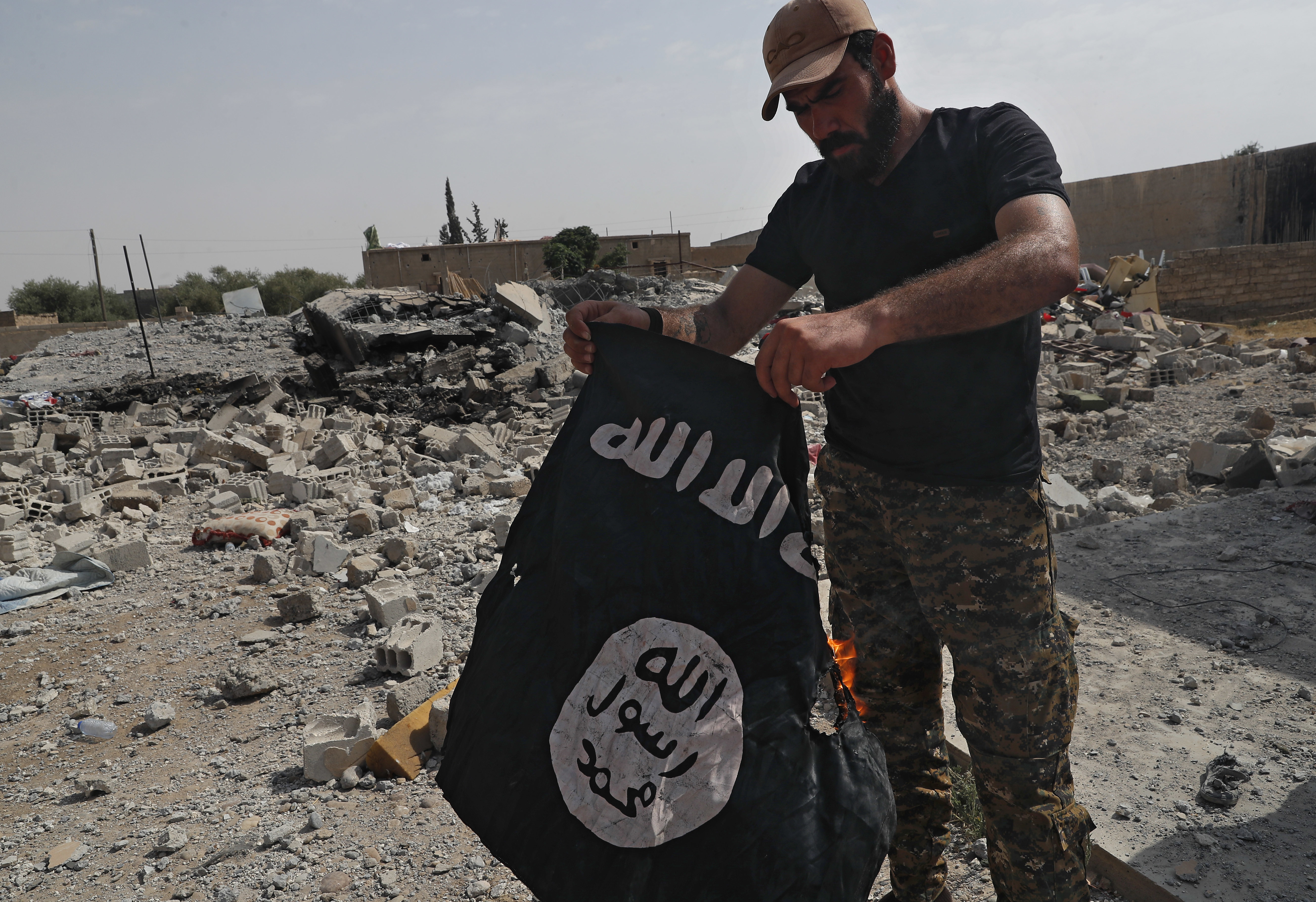 In this July 17, 2017, file photo, a fighter of the Christian Syriac militia burns an IS flag on the front line on the western side of Raqqa, northeast Syria
AP
Helene Cooper, Julian E. Barnes And Thomas Gibbons-Neff/New York Times News Service   |   Washington   |   Published 28.10.19, 07:47 PM

In describing the death of Abu Bakr al-Baghdadi on Sunday, Donald Trump used dramatic, even cinematic language to portray the daring American commando raid that brought down the Islamic State leader who, the President said, died “screaming, crying and whimpering”.

Trump described the video footage he watched from the White House Situation Room as “something really amazing to see”. The experience, the President said, was “as though you were watching a movie”.

What the President saw, according to military and intelligence officials, was overhead surveillance footage on several video screens that, together, provided various angles from above, and in real time.

The videos included heat signatures of those moving around — which analysts labelled friend or foe — at the al-Baghdadi compound near Idlib, Syria. But those surveillance feeds could not show what was happening in an underground tunnel, much less detect if al-Baghdadi was whimpering or crying.

For that, Trump would have had to have got a report from the commandos directly, or relayed up through their chain of command to the commander-in-chief.

At the Pentagon on Sunday, officials steered clear of any description of al-Baghdadi whimpering or crying, and defence secretary Mark T. Esper, when pressed about the President’s assertion on ABC’s This Week, did not repeat the “whimpering” characterisation.

“I don’t have those details,” Esper said. “The President probably had the opportunity to talk to the commanders on the ground.”

A US defence department official said on Sunday that it was possible for Trump to have spoken with one or more of the commandos after the raid, or with their commanders who had spoken to members of the raiding party.

In addition to the version provided by Trump in lengthy televised comments, the accounting of what he saw was provided by a number of military, intelligence and administration officials who spoke on condition of anonymity because they were not authorised to speak publicly about the raid.

Trump would not have received any real-time dialogue from the scene, the officials said, because the last thing American military planners want is to invite critique, second-guessing or even new orders from the Situation Room in the middle of an active military raid.

In fact, in recent years American Special Operations forces have moved away from using helmet cameras to pipe back video in real time on every mission because it is often violent and disorienting, and invites instant comments from back in command centres.

Perhaps because of the importance of this raid, though, the Delta Force operators were wearing body cameras, officials said, but those cameras do not broadcast in real time; instead the video in those cameras is configured to be downloaded and reviewed after the operation is complete.

At the time of Trump’s remarks, that footage had not been reviewed by senior commanders in the Pentagon or given to the White House. It is not clear whether the dog that followed al-Baghdadi into the tunnel was wearing a body camera.

Trump said he did not have to make any decisions in the moments of the raid, while troops were on the ground. (Military officials said they would never have asked him to).

“No,” Trump said in response to whether he had to make decisions on the fly. “We were getting full reports on literally a minute-by-minute basis. ‘Sir, we just broke in. Sir, the wall is down. Sir, you know, we’ve captured. Sir, two people are coming out right now. Hands up.’”

Then, Trump said, he was given a report: “‘Sir, there’s only one person in the building.

“We are sure he’s in the tunnel trying to escape.But it’s a dead-end tunnel,” Trump said he was told.

In the raid that killed Osama bin Laden, the al Qaida leader, in 2011, Leon E. Panetta, who then was serving as CIA director, narrated the events unfolding in Abbottabad, Pakistan, to President Barack Obama and his national security advisers in the Situation Room.

Panetta was on a video screen as he spoke from the CIA headquarters, and was the one who informed the President when the al Qaida leader, code-named “Geronimo”, was positively identified by Navy SEALs as being in the house — and, later, when he was killed.

It was unclear on Sunday whether al-Baghdadi similarly was given a code name for the Idlib raid.