Resignation of Lebanon govt ‘not enough’ 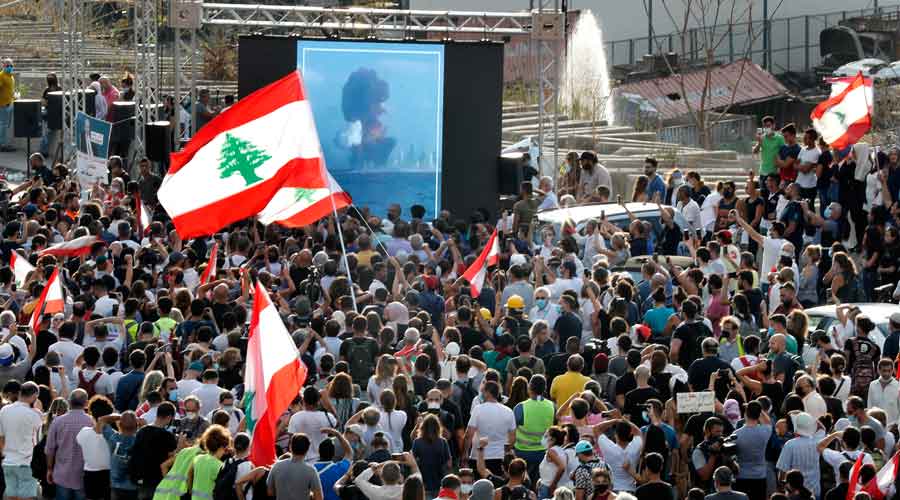 People watch on a giant screen the moment of the massive explosion, as they gather in honor of the victims at the scene of the last week's explosion, in Beirut, Lebanon, on Tuesday
AP
Reuters   |   Beirut   |   Published 12.08.20, 01:15 AM

Angry Lebanese said the government’s resignation on Monday did not come close to addressing the tragedy of last week’s Beirut explosion and demanded the removal of what they see as a corrupt ruling class to blame for the country’s woes.

The blast at the Beirut port left a crater more than 100 metres across on dock nine, the French ambassador said on Twitter following a visit to the site by French forensic scientists supporting an investigation into the disaster.

A protest with the slogan “Bury the authorities first” was planned near the port, where highly explosive material stored for years detonated on August 4, killing at least 171 people, injuring 6,000 and leaving hundreds of thousands homeless.

Prime Minister Hassan Diab, announcing his cabinet’s resignation, blamed endemic graft for the explosion, the biggest in Beirut’s history and which compounded a deep financial crisis that has collapsed the currency, paralysed the banking system and sent prices soaring.

Talks with the IMF have stalled amid a row between the government, banks and politicians over the scale of vast financial losses.

“It does not end with the government’s resignation,” said the protest flyer circulating on social media. “There is still (President Michel) Aoun, (Parliament Speaker Nabih) Berri and the entire system.”

For many Lebanese, the explosion was the last straw in a protracted crisis over the collapse of the economy, corruption, waste and dysfunctional government.

The Beirut port mirrors the sectarian power system in which the same politicians have dominated the country since the 1975-90 civil war. Each faction has its quota of directors at the port, the nation’s main trade artery.

“It’s a good thing that the government resigned. But we need new blood or it won’t work,” silversmith Avedis Anserlian said in front of his demolished shop.

Diab formed his government in January with the backing of the powerful Iranian-backed Hezbollah group and its allies.