Advertisement
Home / World / Republicans barely won the House, but now, can they run it?

Republicans barely won the House, but now, can they run it?

Despite their underwhelming showing, Republicans are unlikely to cooperate with Biden; their agenda is investigative, not legislative 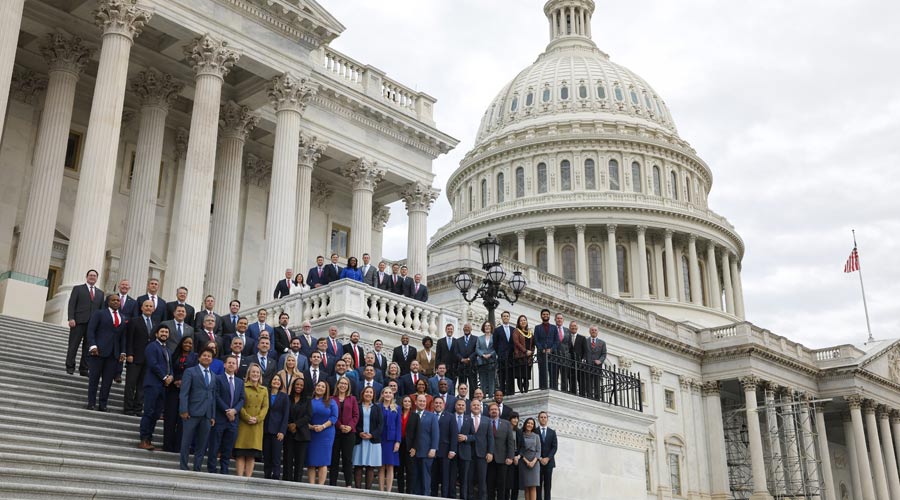 Republicans managed to make their victory in the House seem like a loss by underperforming so badly. But while they did not win control by anywhere near the margin that they anticipated, they did win. And in the House, even the barest majority can work its will if it can hold together to produce 218 votes.

The main question going forward is whether Rep. Kevin McCarthy of California, who was nominated Tuesday to lead the new Republican majority, can achieve the unity necessary to perform fundamental tasks such as funding the government, or whether unyielding far-right members will make the new speaker’s life miserable and the House an unmanageable mess.

The likely single-digit-seat victory will allow Republicans to claim power — including subpoena power — set the agenda, run the committees and try to hold President Joe Biden’s feet to the fire with a string of promised investigations.

Despite their underwhelming showing, Republicans are unlikely to be chastened into cooperating with Biden and no doubt will plunge ahead aggressively once they get their hands on the gavels. For many, that was the point of the election. Their agenda is investigative, not legislative.

“We must be relentless in our oversight of this administration,” Rep. Steve Scalise of Louisiana, the No. 2 House Republican, wrote in a letter to colleagues. “From the politicization of the Justice Department to the job-crushing regulations coming from every agency, we need to shine a bright light on the actions and policy failures of this administration.”

For McCarthy, his party’s win came in the worst possible way. The much thinner than expected majority means fewer Republicans from swing districts who might be averse to provoking chaos, making him more reliant on the fire-breathing hard-right members who triumphed in safe, ruby-red districts on the promise of political warfare against Biden.

At the same time, he will need to protect the less incendiary freshmen, such as the newcomers from New York who will be the top targets of Democrats beginning almost immediately.

The margin and the mix could combine to make the House all but ungovernable.

“It is going to be hard,” Rep. Fred Upton, a retiring Republican centrist from Michigan, said of the task ahead for the new leaders, who are already contending with demands from the right to agree to restrictions that would severely limit their power. “It is going to be really hard, especially when it comes to producing results.”

The only results that interest many in the House majority are those that inflict political pain on Biden and congressional Democrats, as demanded by their MAGA constituents. In a closed-door meeting of Republicans on Monday, right-wing lawmakers including Rep. Marjorie Taylor Greene of Georgia extracted a promise that their leaders would investigate Speaker Nancy Pelosi and the Justice Department for their treatment of defendants jailed in connection with the Jan. 6 attack on the Capitol.

But the new leadership cannot do only investigations. They still have to find some “yes” votes to approve spending bills and other legislation that must pass to keep the government running, when many of their members are very accustomed to voting “no” on just about everything.

Republicans have shut down the government over spending disputes and faced down Democratic administrations over raising the federal debt limit since the rise and fall of Newt Gingrich in the House in the 1990s. In the past, more government-minded Republicans such as Upton could be relied upon to step up and supply the votes needed to resolve a crisis. But the ranks of pragmatists have been severely depleted, replaced by lawmakers who would like nothing more than a game of fiscal chicken, no matter the risks to an already shaky economy.

Already, House Republicans are pushing the incoming team to agree to rules changes that could hamstring the leadership in their ability to bring bills to the floor, an approach that could threaten necessary legislation, such as an increase in the debt limit. Republican leaders could — and probably would be forced to — seek votes from Democrats, but too many concessions or too much cooperation across the aisle will likely spark a rebellion from within.

Not to mention that House Democrats, feeling good about their own election showing, will not be in a big hurry to rescue Republican leaders from their own troops without getting something for it.

The Democratic majority in the Senate will only make the House speaker’s life more difficult. Democrats are emboldened by the fact that they were able to hold — and potentially increase — the Senate majority in the face of historical trends. They want to flex those muscles by pushing ahead on legislative initiatives like the ones they believe led them to victory. Democratic control of the Senate also means that committees in the chamber will not be running parallel investigations into the administration as Republicans had hoped.

Sen. Chuck Schumer, D-N.Y., who will remain as majority leader, has invited Republicans to try to work with Democrats on legislative initiatives, but it seems unlikely that House Republicans will want to take advantage of his offer. The divide is just too wide.

The gulf between Republicans and Democrats just expanded a bit in the Senate as well.

When the Senate convenes in January, the GOP ranks will not include Sens. Rob Portman of Ohio, Roy Blunt of Missouri or Richard Burr of North Carolina — veteran mainstream Republicans upon whom Mitch McConnell of Kentucky, the minority leader, could rely to cast difficult votes on must-pass bills. They will be replaced with Sens.-elect J.D. Vance of Ohio, Eric Schmitt of Missouri and Ted Budd of North Carolina, each of whom received the enthusiastic endorsement of former President Donald Trump.

The election results are still being microscopically analyzed by both parties to discern the messages from voters, which could inform how party leaders proceed over the next two years with a presidential contest on the horizon. But one thing is already clear: With an almost nonexistent majority in the House, Republicans are in for a rough ride, and it will be a challenge to get even the most basic work of Congress done.