'Release our friends,' they chanted at police, referring to the arrest of some 40 demonstrators this week 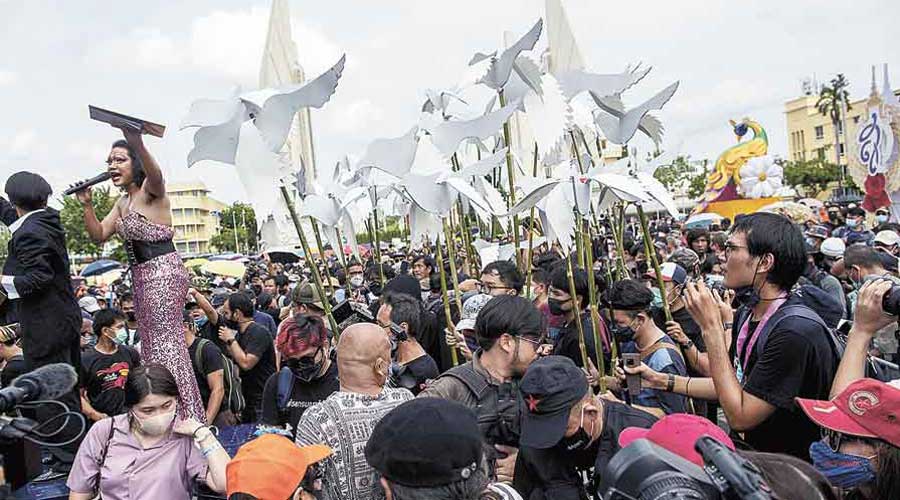 Hundreds of Thai protesters demonstrated in Bangkok on Thursday in defiance of a ban imposed to end three months of anti-government action that has targeted King Maha Vajiralongkorn as well as Prime Minister Prayuth Chan-ocha, a former junta leader.

“Release our friends,” protesters chanted at police, referring to the arrest of some 40 protesters this week. They held up the three-finger salute adopted as a symbol of opposition after Prayuth’s 2014 coup.

Despite police appeals over a loudspeaker to disperse, the group spilled across the Ratchaprasong Intersection in one of Bangkok’s busiest commercial districts.

A protester tied a white bow to the wrist of one policemen, saying: “One day we will stand side by side when Thailand is better.”

Three months of protests in the country of 70 million have been peaceful, as was a march by thousands of people on Wednesday. But in one incident, police pushed jeering protesters away from a motorcade carrying Queen Suthida.

Overnight the government banned political gatherings of five or more people and the publication of news and online information that could threaten national security.  Other reasons given were damage to the economy.