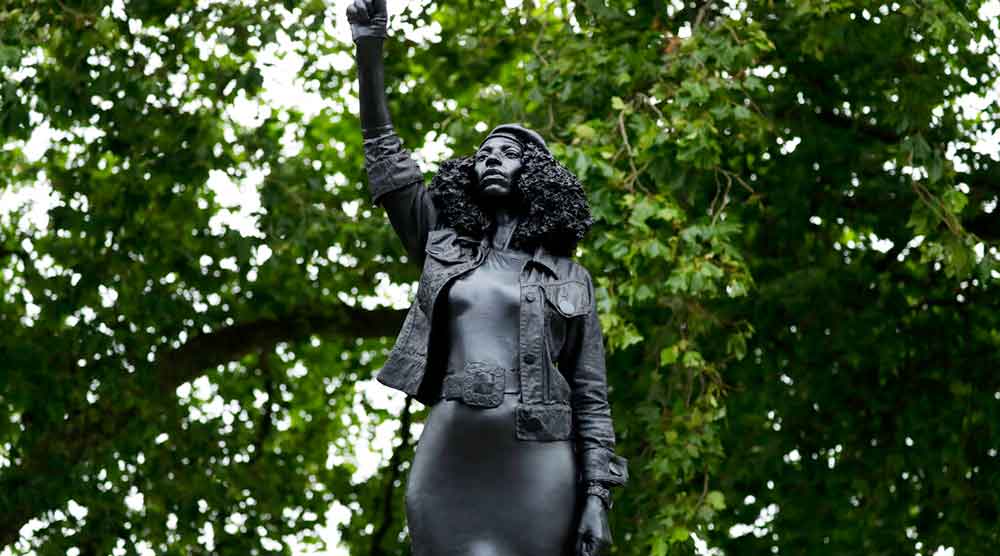 A new black resin and steel statue entitled "A Surge of Power (Jen Reid) 2020" by artist Marc Quinn stands after the statue was put up this morning on the empty plinth of the toppled statue of 17th century slave trader Edward Colston, which was pulled down during a Black Lives Matter protest in Bristol, England, Wednesday, July 15, 2020.
AP
Amit Roy   |   London   |   Published 16.07.20, 03:33 AM

The statue of the 17th century slave trader Edward Colston, which was dramatically pulled down in Bristol last month in TV footage that went round the world, has been replaced — illegally — by that of a Black Lives Matter protester, Jen Reid.

Reid’s statue, by the radical but white London artist Mark Quinn, catches the moment on June 7 when she stood on the empty plinth with her fist raised just before the heavy Colston bronze was dragged a third of a mile and toppled into the waters of Bristol Harbour.

In scenes worthy of a spy thriller, Reid’s statue, made in resin and steel, was transported to Bristol from Quinn’s London studio, where the artist had been working secretly with his subject over the past few weeks.

It was hidden near the empty plinth on Tuesday night but was taken to the site at 5am on Wednesday where 10 men in two lorries used a hydraulic crane to lift it into the position Colston had occupied since 1895. The entire operation was done and dusted in 15 minutes.

The statue is called A Surge of Power (Jen Reid) 2020. A placard left underneath read: “Back Lives Still Matter.”

Reid did a photo op giving a fist salute in front of her likeness and a video recorded for the Guardian, the Left-wing newspaper of choice for the BLM movement.

On whether there was an issue with a white artist being behind the work, Reid said: “It’s not even a question. If we have allies, it doesn’t matter what colour they are. He has done something to represent BLM, and to keep the conversation going.”

But later, a placard placed on the plinth reading, “Marc Quinn loves money, not blacks”, was quickly removed.

Quinn, 56, best known for doing a frozen self-portrait of his head after draining 10 pints of his own blood, justified his act of self-publicity: “Jen created the sculpture when she stood on the plinth and raised her arm in the air. Now we’re crystallising it.”

Marvin Rees, the city’s mayor, issued a statement saying that “the future of the plinth and what is installed on it must be decided by the people of Bristol”.