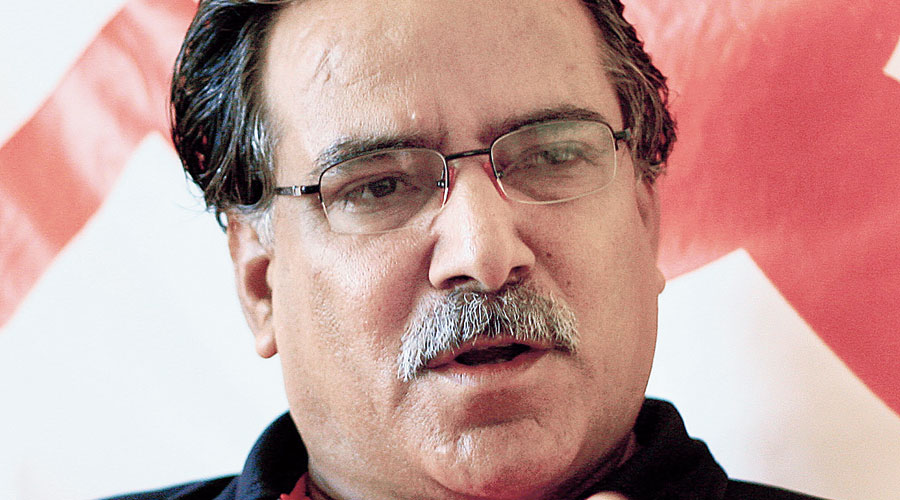 The chairman of the rival faction of the Nepal Communist Party, Pushpa Kamal Dahal, alias Prachanda, has questioned India’s silence over the constitutional crisis in his country after Prime Minister K.P. Sharma Oli dissolved the House of Representatives and called for snap polls earlier this month.

While New Delhi has officially maintained that the turn of events in Nepal since the surprise announcement on December 20 is that country’s internal matter, much is being read into Indian ambassador Vinay Mohan Kwatra meeting Top Bahadur Rayamajhi on Tuesday to congratulate him on his appointment as energy, water resources & irrigation minister over the weekend.

This is being seen in Kathmandu as indicative of where India stands in this power tussle between Oli and Prachanda that has created a constitutional crisis in Nepal. Oli’s decision to dissolve Parliament and call for a fresh election has been taken to court.

Prachanda questioned India’s silence in an interview to Kantipur TV on Monday where he wondered why New Delhi was being a silent spectator to Oli’s decision to trigger a constitutional crisis to hold on to office.

He repeated this on Tuesday during a protest rally but in this case he did not refer to India by name but spoke about democracies across the world in general and wondered at their silence.

India’s moves seem to be guided by Oli’s rejection of China’s efforts to help build bridges between him and Prachanda so that the party does not split.

Though Oli had given India a lot of grief all of this year till August over the boundary dispute, the Nepali Prime Minister had mellowed down vis-a-vis New Delhi over the past couple of months as India and China stepped up efforts to increase their footprint in the neighbourhood.