Advertisement
Home / World / Pope Francis names 20 new cardinals, most of whom will likely vote for his successor

Pope Francis names 20 new cardinals, most of whom will likely vote for his successor 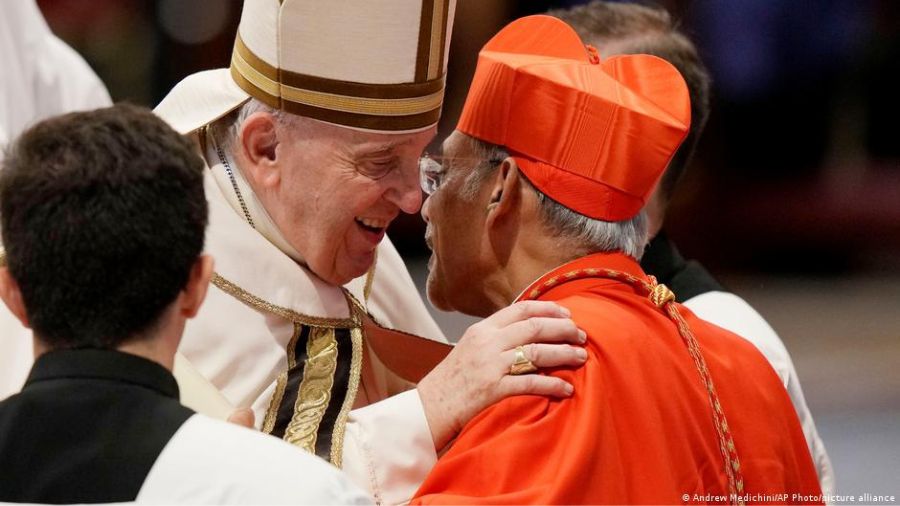 The pope's selection hailed from all over the world, including Filipe Neri Antonio Sebastiao do Rosaria Ferrao from Goa in northern India
Deutsche Welle
Deutsche Welle   |   Published 28.08.22, 10:19 AM

Pope Francis has inducted 20 cardinals from around the world, 16 of whom are young enough to have a say in any potential vote for the next pope. The selections hailed from Asia, Europe, Africa and the Americas.

The 85-year-old presented the new intake with the red square caps and rings typical of their new stations.

During the ceremony, the Argentine pontiff born Jose Maria Bergoglio told the new cardinals to show concern for ordinary people despite the high rank that will bring them into contact with the powerful of the earth.

"A cardinal loves the Church, always with that same spiritual fire, whether dealing with great questions or handling everyday problems, with the powerful of this world or those ordinary people who are great in God's eyes," Francis said.

It's the eighth time since becoming pope in 2013 that Francis has named a new group of cardinals, who will serve as his most senior advisors and administrators both in Vatican City and around the world.

Sixteen of the 20 are under the age of 80, which means they would be eligible to vote for a new pope from among the ranks of cardinals should such a papal conclave take place in the coming years.

Pope Francis has in the past hinted that he might resign as pope if his health deteriorates further, but he also said in a recent interview with Reuters that he was not planning to do so in the near future.

Francis' predecessor, German-born Pope Benedict XVI or Joseph Ratzinger, in 2013 famously resuscitated the idea of a pope retiring prior to his death, becoming the first pope in almost six centuries to leave the job while still drawing breath.

Francis has also made a point of appointing a higher proportion of less elderly people to the position than was historically the case.

Almost all parts of the globe were represented in Saturday's group; with every continent except Oceania (and Antarctica, strictly speaking) represented.

Church analysts said most of the appointees fitted with the more modern and egalitarian ambitions of the first ever pope from Latin America.

But rifts over some of the more divisive modern issues for the Catholic Church like abortion and LGBTQ rights were also visible even among the intake.

For instance, US Catholics noted that Rory McElroy was among a small group of bishops signing a statement expressing support for LGBTQ rights and opposing a bid to block politicians in favor of abortion from taking Communion.

Meanwhile, Ghana's Richard Kuuia Baawobr has spoken out against LGBTQ rights, working in a country that still retains colonial-era laws, now defunct back in former colonizer Britain, outlawing same-sex sexual acts. Baawobr could not attend the ceremony as he was hospitalized owing to a cardiac issue.

Archbishop Ulrich Steiner of Manaus, Brazil, also became the first ever cardinal from the Amazon region.

The youngest cardinal in the new group is just 48, Archbishop Giorgio Marengo is an Italian missionary working in Mongolia, which boasts only around 1,300 Catholics.