We will not gamble with peace or put a sell-by date on reconciliation, and this is why we insist on the backstop: Tusk 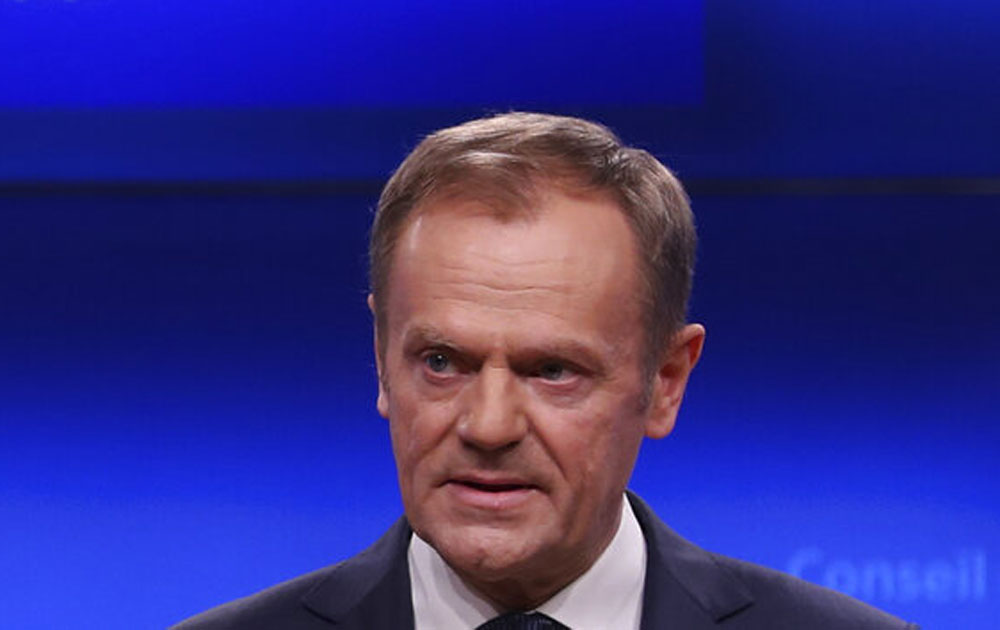 European Council President Donald Tusk took a swipe on Wednesday at some Brexit-backers in Britain, wondering aloud what 'special place in hell' might be reserved for those who had no idea how to deliver the country's exit from the European Union.

With less than two months to go until Britain is due to leave the EU and concern mounting about a potentially chaotic departure, Tusk, who chairs meetings of EU leaders, also appeared to dash any British hopes that the bloc would reopen discussions over the Brexit deal that was overwhelmingly rejected by UK lawmakers last month.

'I have been wondering what a special place in hell looks like for those who promoted Brexit without even a sketch of plan how to carry it out safely,' Tusk told reporters after talks with Irish Prime Minister Leo Varadkar.

As the men shook hands, Varadkar told Tusk 'they will give you terrible trouble in the British press' over the comments — which, as predicted, drew outrage from British Brexiteers.

Sammy Wilson of Northern Ireland's Democratic Unionist Party tweeted that Tusk was a 'devilish euro maniac ... doing his best to keep the United Kingdom bound by the chains of EU bureaucracy and control.'

And former UK Independence Party leader Nigel Farage tweeted: 'After Brexit we will be free of unelected, arrogant bullies like you and run our own country. Sounds more like heaven to me.'

Britain is scheduled to leave the EU on March 29 — the first time a country has ever done so. British Prime Minister Theresa May is due in Brussels on Thursday with what she says is a parliamentary mandate to re-open the withdrawal agreement, sealed between the EU and her Conservative government in November after 18 months of intense, highly technical negotiations.

'The EU 27 is not making any new offer,' Tusk said Wednesday. European Commission President Jean-Claude Juncker agreed, saying the bloc 'is not prepared to reopen the issue.'

Tusk and Varadkar said EU nations were intensifying their preparations for a 'no-deal' British exit — a possibly disastrous development that could inflict heavy economic and political damage in the UK and the EU alike.

'A sense of responsibility also tells us to prepare for a possible fiasco,' Tusk said.

May's opponents, meanwhile, urged the government to delay Brexit, saying Britain is unprepared to leave on March 29. Labour Party foreign policy spokeswoman Emily Thornberry said such a postponement would allow 'time to see whether the negotiations succeed or, if they do not, to pursue a different plan.'

'We have a government treading water in the Niagara River while the current is taking us over the falls,' she told lawmakers in the House of Commons.

Britain's Parliament voted down May's Brexit deal last month, largely because of concerns about a provision for the border between the UK's Northern Ireland and EU member Ireland. The mechanism, known as the backstop, is a safeguard that would keep the UK in a customs union with the EU to remove the need for checks along the Irish border until a permanent new trading relationship is in place.

The border area was a flashpoint during decades of conflict in Northern Ireland, and the free flow of people and goods across the frontier underpins the peace agreement of 1998.

But many pro-Brexit British lawmakers fear the backstop will trap Britain in regulatory lockstep with the EU, while May's political allies in Northern Ireland's Democratic Unionist Party say it imposes barriers between Northern Ireland and the rest of the UK.

In search of elusive unity, May met Wednesday with the DUP, which insists the backstop must be scrapped, and with other Northern Ireland parties who insist it must stay.

There was little sign that any compromises were in sight.

'The prime minister has come here empty-handed, with the same old rhetoric, with no plan, no credibility, frankly no honor,' said Mary Lou McDonald, president of the Irish nationalist party Sinn Fein.

McDonald said the backstop 'is the bottom line' for keeping the border open.

The EU, which has long regarded the Irish border as the thorniest issue in Brexit talks, is also adamant that the backstop can't be removed. Tusk's appearance alongside Varadkar was the latest signal that the bloc will not abandon Ireland, which fears both the economic and political impact of a hard border.

'We will not gamble with peace or put a sell-by date on reconciliation, and this is why we insist on the backstop,' Tusk said. 'Give us a believable guarantee for peace in Northern Ireland, and the UK will leave the EU as a trusted friend.'

Varadkar said Britain's political instability 'demonstrates exactly why we need a legal guarantee' about the border.

During a speech Tuesday in Belfast, May restated her 'unshakeable' commitment to avoiding a hard border and said she was seeking changes to the backstop rather than its removal from the withdrawal agreement.

May's government has been searching for a way to overcome lawmakers' opposition to the backstop, by adding a time limit or an exit clause — both of which have been rejected by the EU — or a finding a way to replace border infrastructure with unspecified technology.

Tusk said he hoped May would bring to Brussels 'a realistic suggestion on how to end the impasse.'