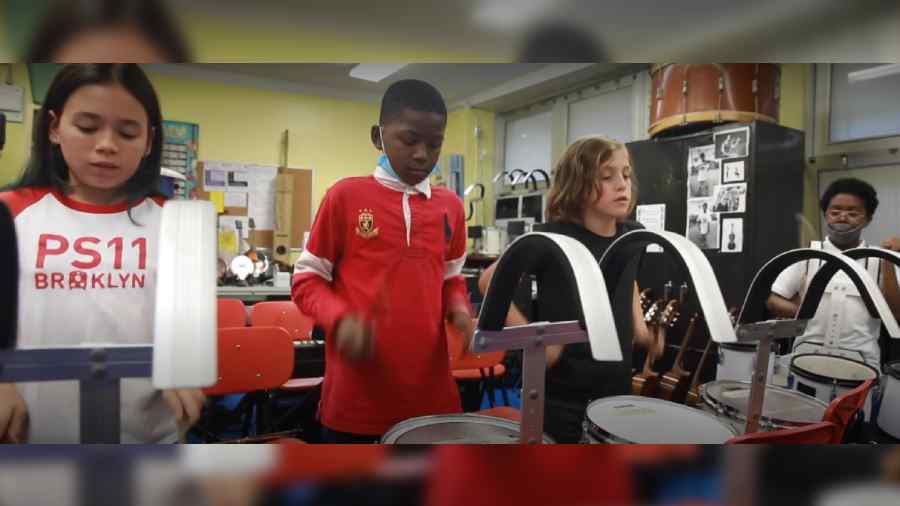 Having a music programme at the school helps her students develop skills beyond academic preparedness.
NYTNS
Sarah Diamond   |   Published 20.06.22, 01:40 AM

Surrounded by classroom walls hung with colourful violins and music theory posters, Roshan Reddy counted to three. He raised his palm, a chorus of shiny horns and woodwinds hummed to life, and the first notes of Adele’s Easy on Me filled the band room at P.S. 11 elementary school in Brooklyn.

Despite clarinet squeaks and the occasional bleat of a rogue saxophone, almost every student was smiling.

It had been a long two years for Reddy’s fourth and fifth grade band students, and for music teachers and their students across New York City. When the Covid-19 pandemic shuttered schools, P.S. 11’s music programme was one of many that struggled to transition online, interrupting children’s introduction to music during some of the most important years for musical development, according to educators and experts.

P.S. 11 students who had instruments at home practiced in their living rooms, on their fire escapes, in their grandparents’ basements. But many had left their instruments behind, and had to watch from the sidelines as their peers tried to keep time with each other over Google Meet.

Fifth grader Diara Brent, a budding saxophonist, was dismayed that in the chaos of school shutting down, she did not bring her saxophone home. “I was typing in the chat like crazy that I didn’t have the instrument,” she said. “I just listened to them play. I couldn’t do anything.”

Now that P.S. 11 band students have returned to the classroom, they are rediscovering their confidence as musicians. But it has been no small task to fill the hole of lost instruction. “Covid obliterated my programme,” said Reddy, the school’s band director. “It hasn’t come back for every student the way it was.”

The pandemic interrupted music instruction for many elementary schoolers at a critical moment — in the years when their brains are just starting to make “sound to meaning” connections. In New York City public schools, elementary music instruction, which had been stable for five years, decreased by 11 per cent between the 2019-20 school year and 2020-21, according to the New York City Department of Education’s Arts in Schools Report.

For students whose only access to music education comes via their public schools, pandemic school closures were especially disruptive. But research also suggests music could help children rebuild what was lost.

Dr Nina Kraus, director of the Auditory Neuroscience Lab at Northwestern University and author of Of Sound Mind: How Our Brain Constructs a Meaningful Sonic World, found that language skills are enhanced in children who make music compared with those who don’t. “We have strong biological evidence that making music changes who we are and changes us in a way that we are better able to learn and communicate,” she said.

P.S. 11’s principal, Abidemi Hope, said having a music programme at the school helps her students develop skills beyond academic preparedness, like refining listening and speaking, learning to ask questions, and making complex discoveries. It is also about giving students at her economically diverse school access to music regardless of their economic status.

At their final concert in spring of 2019, the students from the invigorated music programme performed for three hours. “People who had played earlier started leaving by the end of it because it was just so long. They were like ‘I gotta go home,’” Reddy said, laughing.

P.S. 11’s Class of 2020 did not get to play a final concert. When schools shuttered in March, Reddy wrapped up electrical wires, tied down the classroom chairs, de-tuned the violins, sanitised his instruments, and packed them away in the band room closet for storage.

Virtual teaching was challenging. “In the beginning it was a nightmare,” said Reddy. He spent hours making video recording assignments for students to upload to their Google classroom. Over the summer he scoured YouTube looking for any ideas to bolster his curriculum.

The following school year, each music student received a recorder or ukulele to play in class. The students used Chrome Music Lab to make songs and submitted them as assignments. But nothing compared to being in the physical classroom, and some students stopped attending, said Reddy.

Julian Sanon started as one of Reddy’s violin students in second grade. He did not attend music class online during the pandemic. Instead, he, his dad and his brothers played music together at home and even created a family band that lasted for a week. But Sanon missed his in-person music classes at school, where he could play more complex arrangements with his friends in the drum line.

Now that school is back in person, “everyone around you is connected in the same music,” said Sanon, back in one of his favourite places: Mr Reddy’s music room.

“Yeah,” chimed in another fifth grader in the drum line, Miles Dutra. “Because you have to play in harmony. If one person messes up everybody messes up.”

Sanon nodded. “So, when you get it right, it’s kind of like, peaceful.” he said.

Reddy said: “It’s not about trying to create a little Mozart, it’s about students finding their own strength. We’re the people who have to carry music through this moment.”