The Oxford scientist led the design of the Covid vaccine 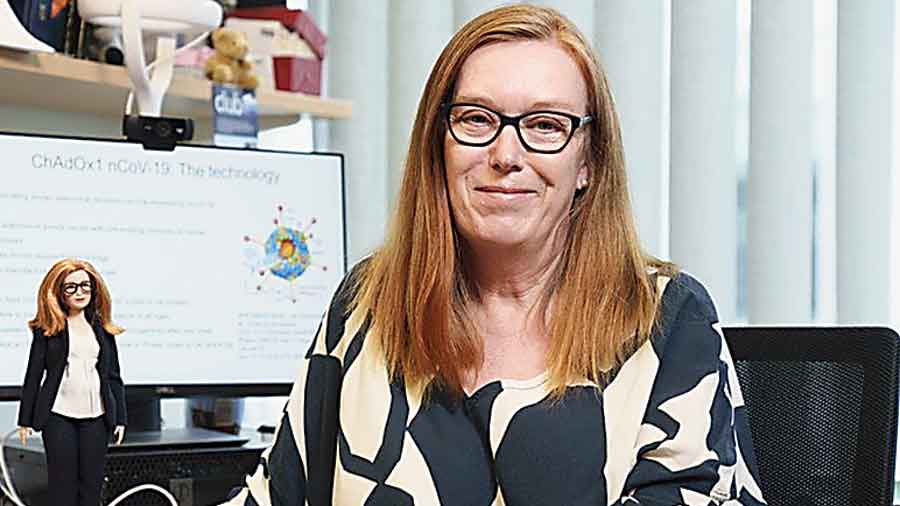 Prof. Sarah Gilbert, the Oxford scientist who led the design of the Covid vaccine, says she hopes a new Barbie doll made in her likeness will inspire children — especially little girls — all over the world to take up science.

In past years, Barbie has been criticised for being invariably “blonde and curvy” but the one Gilbert contemplated in her office with wry amusement shows her attired in a blue trouser suit, white blouse, black glasses and black shoes.

For Gilbert, who took less than 12 months to design the life-saving vaccine (and agree to collaborate with AstraZeneca and the Serum Institute of India), it’s been quite a year. She and co-author Catherine Green have told the vaccine story in a book, Vaxxers: The Inside Story of the Oxford AstraZeneca Vaccine and the Race Against the Virus.

She been given a Damehood, a high British honour, and received an emotional standing ovation at Wimbledon when spectators found out she was seated in Centre Court.

Gilbert’s reaction to the Barbie doll is surprisingly positive.

The 59-year-old professor said she initially found the gesture “very strange” but hoped it would inspire young girls to work in science, technology, engineering and mathematics (Stem).

“I am passionate about inspiring the next generation of girls into Stem careers and hope that children who see my Barbie will realise how vital careers in science are to help the world around us,” she said.

“My wish is that my doll will show children careers they may not be aware of, like a vaccinologist.”

Lisa McKnight, senior vice-president and global head of Barbie and dolls at Mattel, commented: “Barbie recognises that all frontline workers have made tremendous sacrifices when confronting the pandemic and the challenges it heightened. To shine a light on their efforts, we are sharing their stories … to inspire the next generation to take after these heroes and give back.”

As well as the likeness of Gilbert, the toy company has created models in honour of five other women working in Stem around the world.

Barbie was launched by Mattel in 1959 as a fashion doll, the creation of American businesswoman Ruth Handler.

From the start, some complained that “the blonde, plastic doll conveyed an unrealistic body image to girls”.

But Mattel has tried to move with the times.

as the 1960s were breaking, the doll market consisted mostly of babies, designed for girls to cradle, rock and feed. By creating a doll with adult features, Mattel enabled girls to become anything they want.”