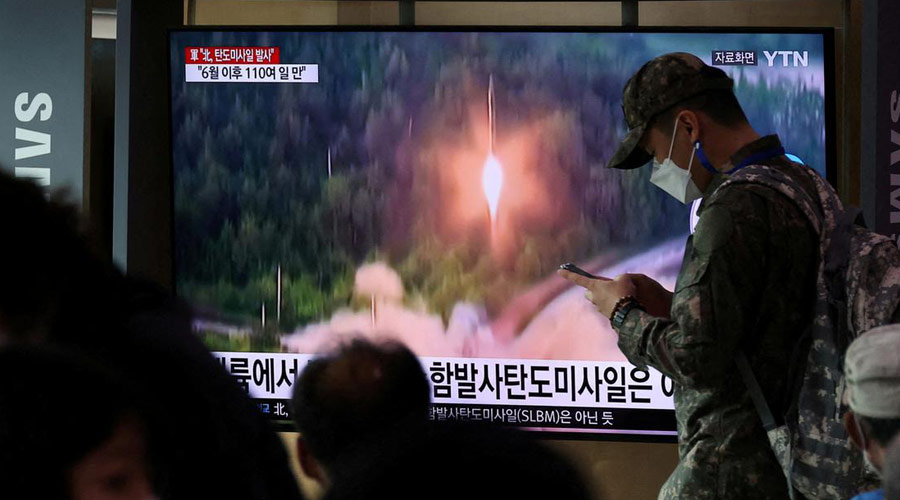 Ulleung Island to the east of mainland South Korea was placed under an air raid warning. Authorities in Seoul said one of the missiles landed just 57 kilometers (35 miles) east off the country's coastline.

"The North Korean missile launch is very unusual and unacceptable as it fell close to South Korean territorial waters south of the Northern Limit Line for the first time," said Kang Shin-chul, director of operations for the Joint Chiefs of Staff.

The missile launch comes just hours after Pyongyang issues threats to Washington and Seoul to halt joint military exercises around the peninsula. It is the latest in a spate of tests carried out by the isolated regime in recent months.

In a statement made earlier on Tuesday, Pak Jong Chon, secretary of the Central Committee of North Korea's ruling Workers' Party, demanded the United States and South Korea stop their "frantic" and "provocative" wargames in the region.

He added that it "is a big mistake to accept this as a threat warning only."

Later on Tuesday, the White House denied any attempt at provocation.

"We have made clear that we have no hostile intent towards the DPRK and call on them to engage in serious and sustained diplomacy,'' National Security Council spokesperson Adrienne Watson said.

Nuclear weapons in the picture

Some of North Korea's recent missile tests have included mock nuclear warheads, and Pyongyang recently passed laws allowing for the preemptive use of nuclear weapons.

Park Won-gon, a professor at Ewha University, told the AFP news agency that the Wednesday's missile launches were unusual.

"As far as I can remember, North Korea has never made such a provocation when South Korea and the US were holding their joint drills," he said.

"Pyongyang seems to have completed its most powerful deterrent. This is a serious threat. The North also seems confident in their nuclear capabilities."