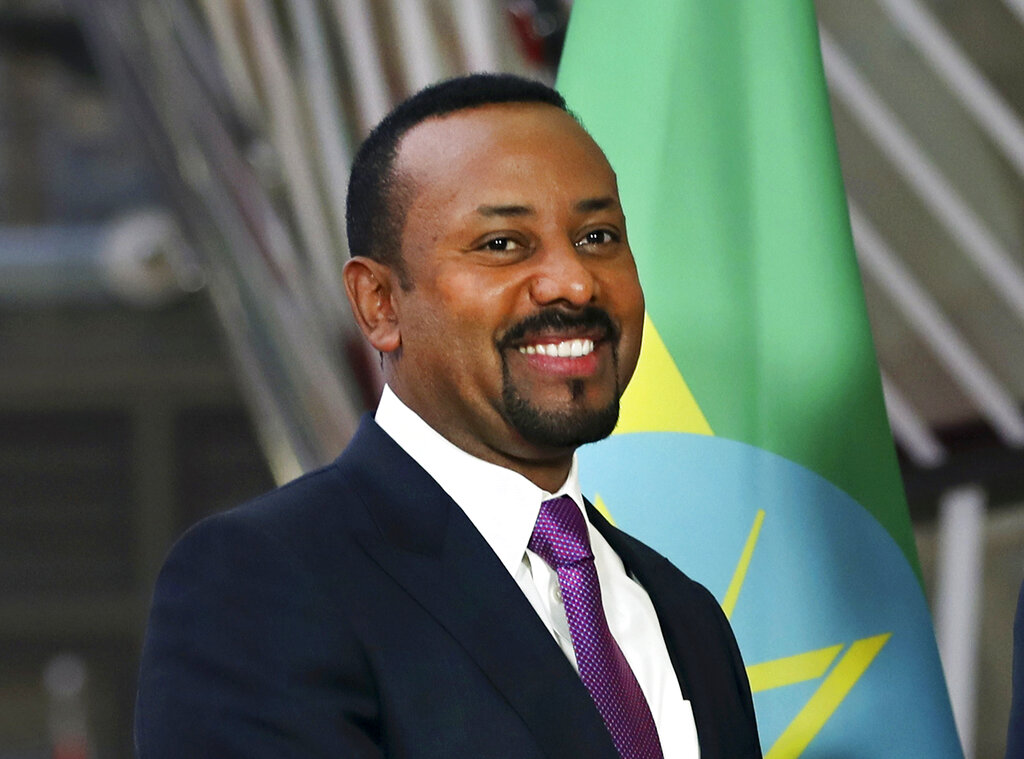 Abiy Ahmed, the Prime Minister of Ethiopia, was awarded the Nobel Peace Prize on Friday for his work in restarting peace talks with neighbouring Eritrea, ending a long stalemate between the two countries.

Abiy, 43, broke through two decades of frozen conflict between his vast country, Africa’s second-most populous, and Eritrea, its small and isolated neighbour. When he became Prime Minister of Ethiopia in 2018, Abiy threw himself at a breakneck pace into reforms at home and peace negotiations with the rebel-turned-dictator Isaias Afwerki, President of Eritrea.

The two nations share deep ethnic and cultural ties, but until July last year they had been locked into a state of neither peace nor war, a conflict that had separated families, complicated geopolitics and cost the lives of more than 80,000 people during two years of border violence.

In its official announcement, the Nobel Committee detailed a litany of accomplishments for Abiy in his first 100 days as Prime Minister: lifting the country’s state of emergency, granting amnesty to thousands of political prisoners, discontinuing media censorship, legalising outlawed Opposition groups, dismissing military and civilian leaders suspected of corruption, and increasing the influence of women in political and community life.

“Abiy Ahmed has initiated important reforms that give many citizens hope for a better life and a brighter future,” the Norwegian Nobel Committee said. But some of Abiy’s reforms at home, however positive on paper, have also unleashed forces that seem to be beyond his control.

Ethnic rivalries have flared in recent years and more than two million people have been internally displaced because of conflict.

The peace accord signed more than a year ago between Abiy and Isaias has only slowly translated into concrete steps to reconnect the two nations. Genuine change for Eritreans has been limited: They remain isolated and under Isaias’s iron fist despite the peace.

But the agreement has been held up as an example of how historic change can come about in even the oldest and most intractable conflicts. Diplomatic relations between Ethiopia and Eritrea have resumed, and the two leaders and senior officials from both nations have met frequently to discuss how to reconnect the two countries.

“Peace does not arise from the actions of one party alone,” Reiss-Andersen said as she announced the award on Friday. “When Prime Minister Abiy reached out his hand, President Afwerki grasped it, and helped to formalise the peace process between the two countries.”

Telecommunications between Ethiopia and Eritrea have been restored, allowing families that were split in the war to regain contact. In the days that followed this breakthrough, some Ethiopians called Eritrean numbers randomly, and vice versa, just to speak to someone on the other side, simply because they could. Others tracked down parents, siblings and friends.

When the first commercial Ethiopian Airlines flight from Addis Ababa to the Eritrean capital, Asmara, landed on July 18 last year, passengers stepping off the plane fell to their knees and kissed the ground. Two sisters separated from their father in the war, stuck on opposite sides of the border, embraced him for the first time after 20 years without him.

In an official statement, Abiy’s office called the award a “timeless testimony” to the ideals of “unity, cooperation and mutual coexistence that the Prime Minister has been consistently championing.”

“Today, as the world takes note and celebrates his achievements through bestowing the Nobel Peace Prize, we invite all Ethiopians and friends of Ethiopia to continue standing on the side of peace,” the statement read.

Eritrea and Ethiopia were once one. After a dogged, three-decade war, Eritrea seceded from Ethiopia and gained independence in 1991. But fresh fighting soon followed, and by 1998 the two nations were locked in a conflict over a portion of their shared border. A United Nations-backed committee found in Eritrea’s favour, but its ruling was never implemented, and the state of war continued.

Isaias, the Eritrean President, used the dispute as a justification to suspend the Constitution in Eritrea and impose an unending state of emergency, allowing him to conscript a majority of the population into permanent, indefinite military service.

The policy, which is still in place despite the peace deal last year, has sparked one of the world’s largest and most prominent refugee movements, as Eritreans left their country in droves seeking asylum in Europe and North America.

Experts say that the peace prize being awarded to Abiy will renew pressure on Isaias to finally lift the state of emergency and with it the policy of mandatory conscription.

“To see a fully fledged peace deal which has a meaningful impact on the lives of Eritreans, and also Ethiopians to a lesser degree, we need to see internal changes in Eritrea that bring a return to constitutional government and reflect the ending of hostilities with Ethiopia,” Will Davidson, an expert with the research organisation Crisis Group, said.

Others, like Meron Estefanos, an Eritrean-Swedish activist, see the prize as merely legitimising Isaias and his brutal rule without forcing him to change his policies at home.

“How do you award a peace prize without peace?” she said. “Do Eritreans have peace? No,” “People are still fleeing, people are still hiring smugglers, we are watching things get worse, not better,” she said. “This is just legitimising the dictatorship.”

Davidson said changes within Ethiopia also had a long way to go.

“There have been significant initial improvements in Ethiopia-Eritrea relations, but it is a work in progress, and there’s a lot of tough work to be done. We can say exactly the same for the internal Ethiopia situation,” Davidson said.

“Important anti-authoritarian steps have been taken and there are meaningful and genuine democratic aspirations,” he added. “But it’s still very much a work in progress, with arguably the hardest challenges lying ahead.”

Abiy rose to become Prime Minister of Ethiopia, which is on the ascent as a geopolitical and economic power in East Africa and more broadly on the continent, in April last year.

Ethiopia’s ruling party had long kept the country in a tight grip, allowing for very small democratic freedoms while using a powerful army to enforce its dogged vision of progress irrespective of dissent.

But in recent years, that grip began to slip, as marginalised ethnic groups rose up to claim economic power and freedoms. In a bid to survive, the ruling party in March 2018 put forward Abiy, who is a political insider but also young and of a mixed ethnic background, to lead the country.

Abiy has promised free elections next year, most likely in May.

“It is great that he won the prize when I think of what it means for the country,” said Tsege Afrassa, a masters student at Addis Ababa University.

“But he has a lot more to do to restore full peace in the country,” she added. “The prize brings more responsibility with it.”