Advertisement
Home / World / No one will be safe in Biden’s America, says Trump

No one will be safe in Biden’s America, says Trump

In trying to paint him as a tool of the “radical Left”, Trump also distorted the Democrat’s policy positions on a host of other issues, including immigration, guns, and abortion 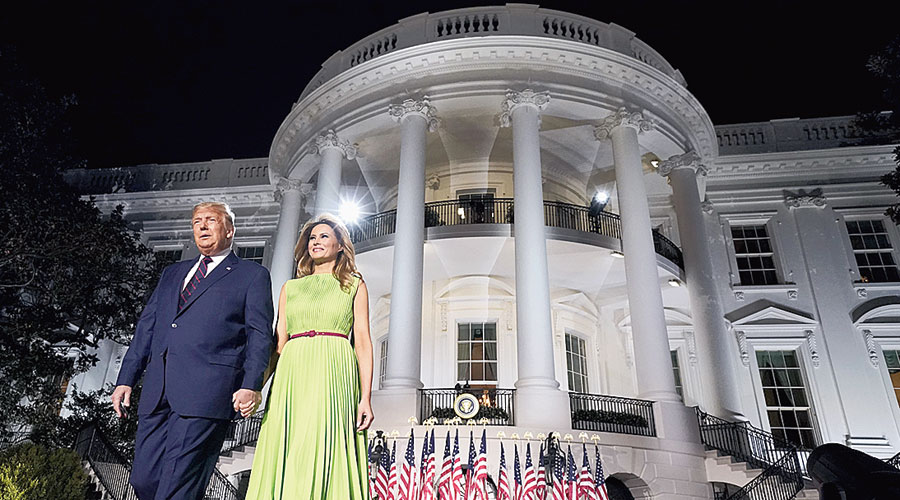 US President Donald Trump and First Lady Melania Trump at the South Lawn of the White House on the fourth day of the Republican National Convention.
(AP)
PTI & Reuters   |   Washington   |   Published 29.08.20, 01:07 AM

A defiant President Donald Trump accepted the Republican nomination for a second term on Thursday with a scathing attack on rival Joe Biden, asserting that a Democratic victory in November would only exacerbate the racial strife and coronavirus pandemic besieging the nation.

Speaking from the White House South Lawn despite criticism he was using the executive residence as a political prop, Trump portrayed Biden, a career politician with a long record as a moderate, as a far-Left extremist who would usher in a lawless, dangerous America.

“This election will decide whether we protect law-abiding Americans, or whether we give free rein to violent anarchic agitators and criminals who threaten our citizens,” Trump said on the fourth and final night of the Republican National Convention in a speech that lasted more than an hour.

“No one will be safe in Biden’s America.”

Despite the pandemic that has killed more than 180,000 Americans, Trump delivered his remarks before a crowd of more than 1,000 people, standing in front of dozens of American flags and basking in chants of “Four more years!” and “USA!”

His language was evocative of his 2016 convention acceptance speech, which also came at a time of racial tension after eight police officers were killed in Texas and Louisiana amid protests following shootings of Black men.

“Americans watching this address tonight have seen the recent images of violence in our streets and the chaos in our communities,” he said then, vowing to end the turmoil.

But Trump, who ran successfully as an insurgent four years ago, is now in control at the White House, complicating his assertion once again that only he can solve the problem.

Republicans on Thursday sought to advance that message after days of civil unrest and violence in Kenosha, Wisconsin, where on Sunday police shot a Black man, Jacob Blake. They inaccurately asserted that Biden would “defund the police”. Biden has rejected that position.

As the night unfolded, Biden struck back on Twitter, writing, “When Donald Trump says tonight you won’t be safe in Joe Biden’s America, look around and ask yourself: How safe do you feel in Donald Trump’s America?”

In trying to paint Biden as a tool of the “radical Left”, Trump also distorted the Democrat’s policy positions on a host of other issues, including immigration, guns, law enforcement, abortion and energy production.

“If given the chance, he will be the destroyer of American greatness,” Trump warned.

Describing Trump as the “people’s President” and listing out his administration’s “people-friendly” policies during his first term, his daughter Ivanka Trump delivered a fiery speech in support of her father’s re-election bid.

“America doesn’t need another empty vessel who will do whatever the media and the fringe of his party demands. Now more than ever, America needs four more years of a warrior in the White House,” 38-year-old Ivanka said in her address to the Republican National Convention on Thursday from the South Lawn of the White House.

“Tonight, I stand before you as the proud daughter of the people’s President,” she said.