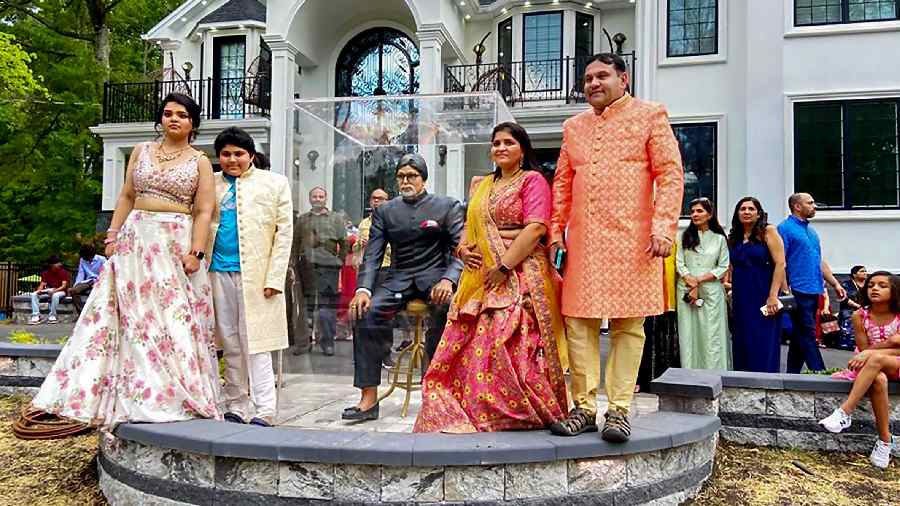 An Indian-American family poses for photos with a newly-installed life-size statue of Bollywood superstar Amitabh Bachchan at their residence during an unveiling ceremony, at Edison City in New Jersey.
PTI image
Lalit K Jha   |   Washington   |   Published 29.08.22, 09:21 AM

An Indian-American family has installed a life size statue of Bollywood superstar Amitabh Bachchan at their home in the Edison City of New Jersey.

Some 600 people gathered outside the house of Rinku and Gopi Seth in Edison, often called Little India for being home to a significantly large Indian-American population, when the statue was formally unveiled by eminent community leader Albert Jasani.

The status is placed inside a large glass box.

The ceremony was accompanied by bursting of fire-crackers and impromptu dance by a fan club of the Indian superstar.

"He is nothing less than a god to me and my wife," Gopi Seth, who is an internet security engineer," told PTI.

"The biggest thing that inspires me about him is not only his reel life, but also the real life how he manages himself in public, how he conveys and communicates everything you know. He is very down to earth. He takes care of his fans. He is not like so many other stars. This is why I thought I should have his status outside of my house," Seth said.

Seth, who arrived in the US from Dahod in eastern Gujarat in 1990, has been running www.BigBEFamily.com, a website for "Big B Extended Family", for the past three decades.

The website, among other things, he said is a repository of the global fans of Amitabh Bachchan. The database is shared with the 79-year-old Bollywood superstar.

According to Seth, Bachchan is aware about the statue.

Seth said the superstar told him he does not deserve this kind of treatment, but did not stop him from doing so.

The life size statue in which shows Bachchan seated in his Kaun Banega Carorpati mode was especially designed and made in Rajasthan and then shipped to the United States. The entire project, Seth said, cost him more than USD75,000 (about Rs 60 lakhs).

Seth said he first met "his god'' during Navaratri celebrations in New Jersey in 1991.

"Since then he has been a big fan. He said he has been organising his fans in the US and globally which later turned into a website. "Bachchan Saheb calls his fans and supporters as his extended family," he said.

"Installing a statue in the US comes with a lot of challenges and this was more difficult than others," he said.