Navalny fighting for life after ‘poisoning’ 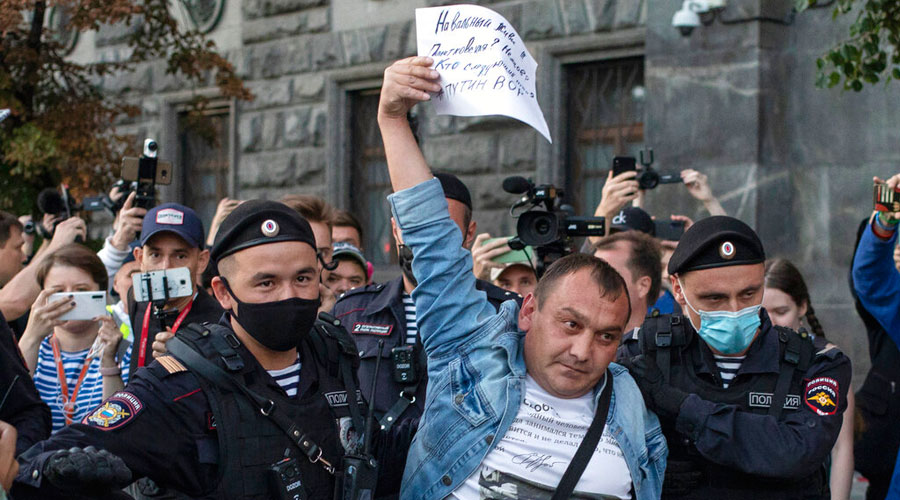 Police officers detain a protester as he comes to support Russian opposition leader Alexei Navalny in front of the building of the Federal Security Service in Moscow on Thursday.
AP
Reuters   |   Moscow   |   Published 21.08.20, 02:22 AM

Kremlin critic Alexei Navalny was fighting for his life in a Siberian hospital on Thursday after drinking tea that allies said they believe was laced with poison.

If confirmed, it would be the latest in a long series of poisonings and suspected poisonings of people who have fallen out with the Kremlin, which denies settling scores with its foes by murdering them.

Navalny, a fierce critic of President Vladimir Putin and his lieutenants, began feeling ill on a plane to Moscow on Thursday morning after drinking tea at an airport cafe in the Siberian city of Tomsk.

His condition became so serious that the plane made an emergency landing at the city of Omsk, en route to Moscow, where he was carried off on a stretcher.  Kira Yarmysh, his spokeswoman, said he was in intensive care in a serious but stable condition, and on an artificial lung ventilator in a hospital in the city.

“We assume that Alexei was poisoned with something mixed into his tea. It was the only thing that he drank in the morning. Alexei is now unconscious,” Yarmysh said.  Kremlin spokesman Dmitry Peskov said any poisoning would need to be confirmed by laboratory tests.