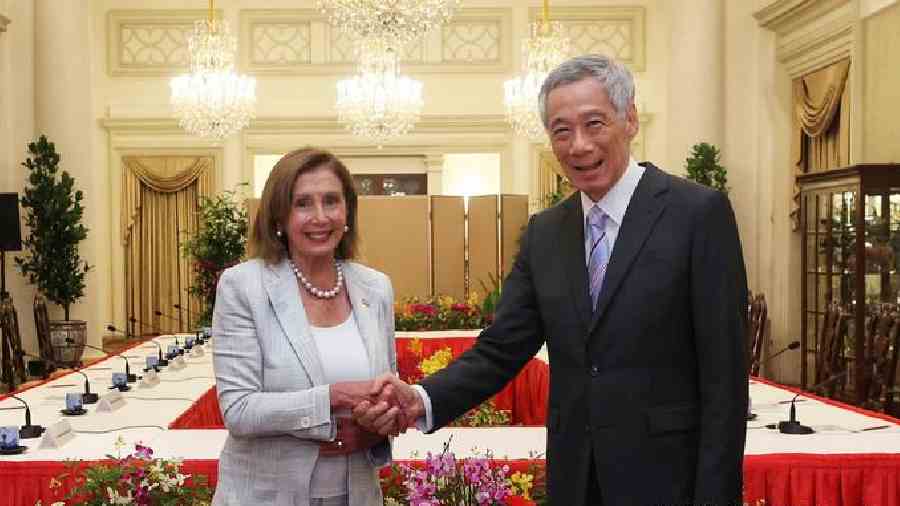 The White House warned China to tone down its rhetoric on Monday in regards to US House Speaker Nancy Pelosi potentially visiting Taiwan, underscoring that there was no reason for Beijing to escalate tension.

Despite Beijing seeing the visit as highly provocative and an uptake of Chinese military presence in proximity to the island, the White House emphasized it was ultimately Pelosi's decision whether to travel to Taiwan or not.

The White House and State Department are both considered to be opposed to the trip.

"Put simply, there is no reason for Beijing to turn a potential visit consistent with long-standing US policy into some sort of crisis or use it as a pretext to increase aggressive military activity in or around the Taiwan Strait,'' White House National Security Council spokesman John Kirby explained.

"The speaker has the right to visit Taiwan," he told reporters. Kirby went on to say the United States "will not be intimidated" from continuing to move freely in the Pacific region.

However, he stressed that US policy had not changed toward the self-governed island, emphasizing that the US will continue to recognize Chinese sovereignty over Taiwan.

"Nothing has changed," he said. "There's certainly no reason for this to come to blows."

Media reports have said Pelosi could visit Taiwan on Tuesday or Wednesday, which would make her the highest-ranking elected US official to visit in more than 25 years.

Neither the Taiwanese foreign ministry nor her official itinerary have any mention of the visit.

US House Speaker Nancy Pelosi held talks with officials in Singapore on Monday at the start of her Asian tour.

Lee welcomed a US commitment to strong engagement with the region, and the two sides discussed ways to deepen economic engagement through initiatives such as the Indo-Pacific Economic Framework, Singapore said.

The possibility of a visit to the island — which lies some 100 miles (160 kilometers) southeast from the coast of China — continues to cloud Pelosi's trip, despite there being no mention of Taiwan on her official itinerary. And when meeting Pelosi, Lee "highlighted the importance of stable US-China relations for regional peace and security," the ministry said.

One of our delegation’s first stops in Singapore was to greet our U.S. Marine Detachment at @RedWhiteBlueDot.

It was our honor to bring the gratitude of the Congress to our patriots in uniform selflessly serving our nation overseas. pic.twitter.com/mIU93buIjE

China recognizes Taiwan as one of its provinces

Beijing views Taiwan as part of its own territory. Chinese President Xi Jinping has made "reunification" with Taiwan a key objective, and has not ruled out possible use of force to achieve this.

Taiwan rejects China's sovereignty claims and says only its people can decide the island's future.

Last Wednesday, Biden told reporters he thought the US military believed a Pelosi visit to Taiwan was "not a good idea right now." The following day, President Xi warned Biden that Washington should abide by the one-China principle or "those who play with fire will perish by it."

Formally, like most of the world, the US does not hold diplomatic relations with Taiwan, because China forces its partners to choose between diplomatic recognition of Taipei or Beijing. However, the US does provide considerable financial and military assistance to Taiwan.

Taiwan not on Pelosi's official itinerary

On Sunday, Pelosi's office issued a statement saying that the House Speaker would lead a "Congressional delegation to the Indo-Pacific region, including visits to Singapore, Malaysia, South Korea and Japan."

The statement went on to say: "The trip will focus on mutual security, economic partnership and democratic governance in the Indo-Pacific region."

Despite there being no mention of Taiwan in the statement, Amanda Hsiao, a China analyst with global think tank International Crisis Group, told DW that Pelosi "could" still visit the island. If she did, she would be the highest-ranked US politician to go there in decades.