Myanmar youths fight for their dreams 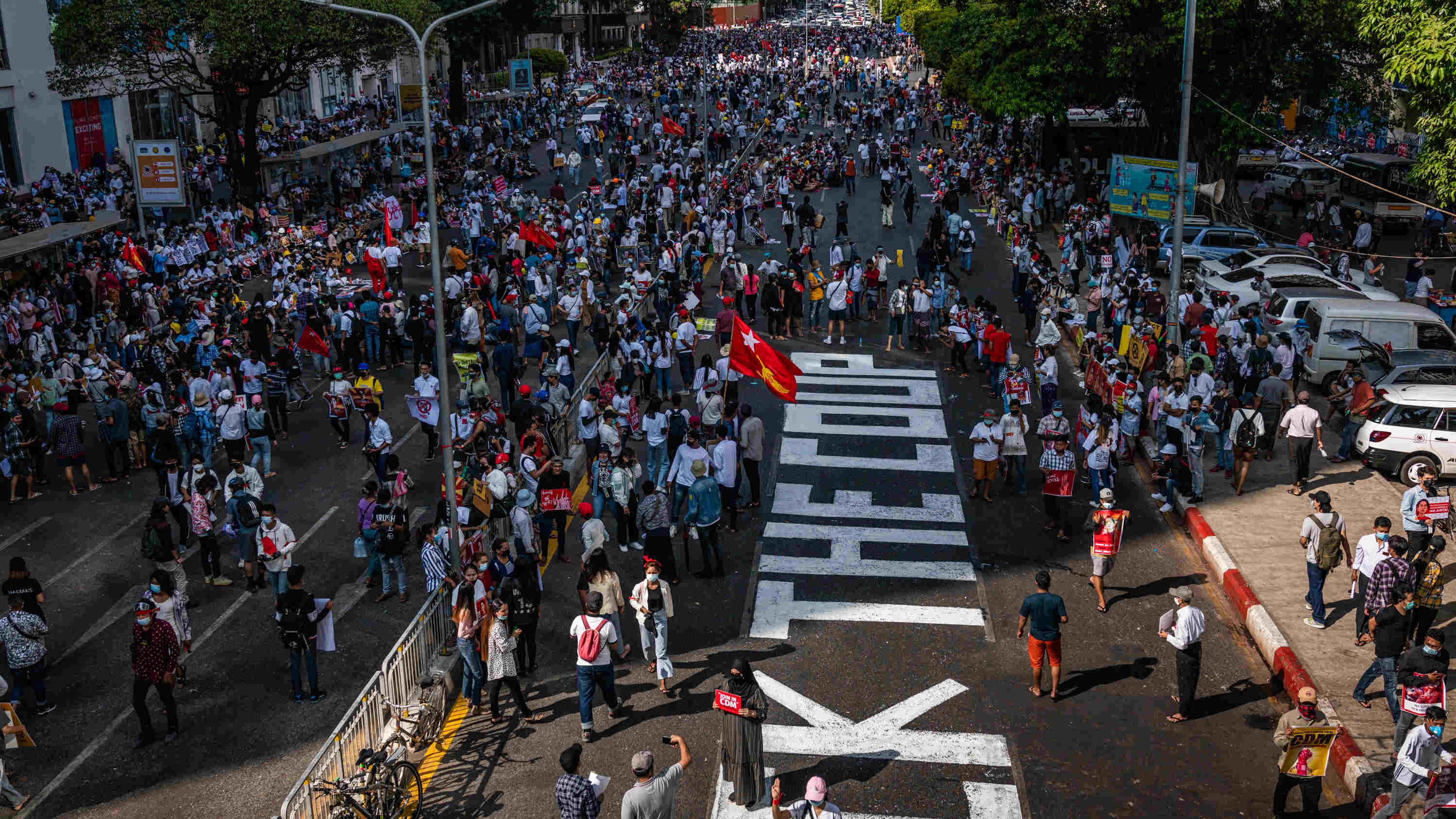 Protesters draw a message on a road on February 17, 2021 in downtown Yangon, Myanmar. Armored vehicles continued to be seen on the streets of Myanmar's capital, but protesters turned out despite the military presence. The military junta that staged a coup against the elected National League for Democracy (NLD) government moved to keep the country's de-facto leader Aung San Suu Kyi under house arrest after she was charged with violations of import-export and Covid prevention laws.
Hkun Lat/Getty Images
Reuters   |   Naypyitaw, Myanmar   |   Published 22.02.21, 01:35 AM

Huge crowds marched in Myanmar on Sunday to denounce the February 1 military coup in a show of defiance after the bloodiest episode of the campaign for democracy the previous day, when security forces fired on protesters, killing two.

The military has been unable to quell the demonstrations and a civil disobedience campaign of strikes against the coup and the detention of elected leader Aung San Suu Kyi and others, even with a promise of new elections and stern warnings against dissent.

Tens of thousands of people massed peacefully in the second city of Mandalay, where Saturday’s killings took place, witnesses said.

The foreign ministry said in a statement that despite “unlawful demonstrations, incitements of unrest and violence, the authorities concerned are exercising utmost restraint through minimum use of force to address the disturbances”, adding they were maintaining public safety in line with domestic laws and international practices.

In the main city of Yangon, thousands of mostly young people gathered at different sites to chant slogans and sing.

“Us young people have our dreams but this military coup has created so many obstacles,” said Ko Pay in Yangon. “That’s why we come out to the front of the protests.”

In Myitkyina in the north, people laid flowers for the dead protesters. Big crowds marched in the central towns of Monywa and Bagan, in Dawei and Myeik in the south, Myawaddy in the east and Lashio in the northeast, posted pictures showed.

At the tourist spot of Inle Lake, people, including Buddhist monks, took to a flotilla of boats holding aloft portraits of Suu Kyi and signs saying “military coup — end”.

The more than two weeks of protests had been largely peaceful until Saturday, unlike previous episodes of opposition during nearly half a century of direct military rule to 2011.

The violence looked unlikely to end the agitation. “The number of people will increase.… We won’t stop” protester Yin Nyein Hmway said in Yangon.

Several western countries that have condemned the coup, including the US, decried the violence against protesters.

Sunday’s foreign ministry statement reiterated the junta’s stance that the takeover was constitutional and said remarks by some embassies and foreign countries “are tantamount to flagrant interference in internal affairs of Myanmar”.

UN special rapporteur for Myanmar Tom Andrews said he was horrified by the deaths of the two, one of them a teenaged boy, in Mandalay on Saturday.

Suu Kyi’s National League for Democracy (NLD) called the violence by security forces in Mandalay a crime against humanity.

In an announcement on state-owned media MRTV late on Sunday, authorities said that by planning a big demonstration on Monday, protesters were inciting anarchy and pushing young people towards a path of confrontation “where they will suffer the loss of life”.

A young woman protester, Mya Thwate Thwate Khaing, became the first death among the demonstrators on Friday. She was shot in the head on February 9 in the capital Naypyitaw. Hundreds of people attended her funeral on Sunday.

Military media said the bullet that killed her did not come from any gun used by police and so must have been fired by an “external weapon”.