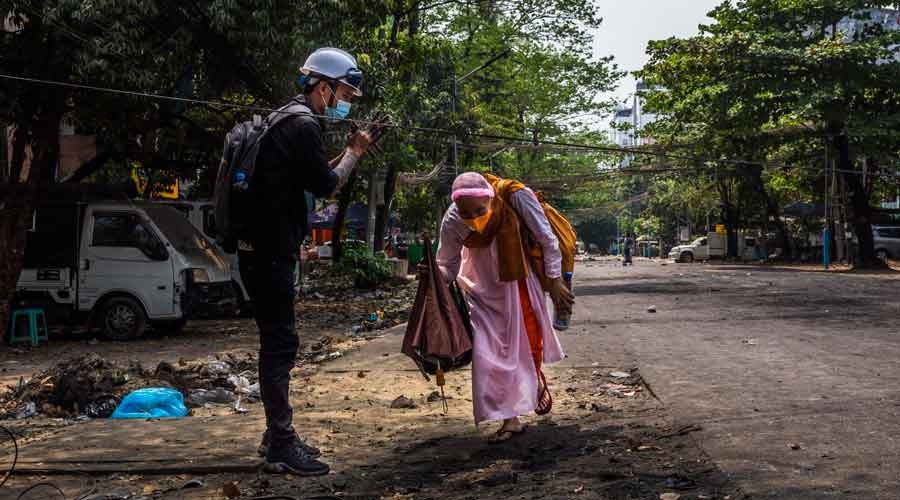 An anti-coup demonstrator prays while helping a Buddhist nun go underneath a wire stretched across the street in an attempt to stop security forces ahead of a crackdown in Yango
NYTNS
Reuters   |   Published 04.04.21, 12:38 AM

Myanmar security forces opened fire on pro-democracy protests on Saturday killing at least five people, a protester and media said, as the military reinforced its bid to end dissent with arrest warrants for online critics and Internet blocks.

Despite the killing of more than 550 people by the security forces since the February 1 coup, protesters are coming out every day, often in smaller groups in smaller towns, to voice opposition to the reimposition of military rule.

Security forces in the central town of Monywa, which has seen big protests day after days for weeks, fired on a crowd killing at least four people and wounding several, two media organisations said.

“They started firing non-stop with both stun grenade and live rounds,” the protester in Monywa, who declined to be identified, told Reuters via a messaging app.

“People backed off and quickly put up... barriers but a bullet hit a person in front of me in the head. He died on the spot.”

One man was shot and killed in the southern town of Thaton, the Bago Weekly Journal online news portal and residents reported. Police also fired in the central town of Bago, wounding one man.

Police and a spokesman for the junta did not answer telephone calls seeking comment.

The Assistance Association for Political Prisoners activist group, in a statement earlier in the day, said the security forces had killed 550 people, 46 of them children, since the military overthrew an elected government led by Aung San Suu Kyi.

The demonstrations that drew thousands of people in the early days of defiance in big cities have become more rare with opponents of the coup adopting “guerrilla rallies” — small, quick shows of defiance before security forces can respond. People also gather at night for candle-lit vigils. “People are still protesting every day because we believe strongly that this is a fight between good and evil,” protest leader Tayzar San said.