Since the army seized power and removed the elected govt of Suu Kyi and crushed dissent, groups like people’s defence forces have sprung up across the country 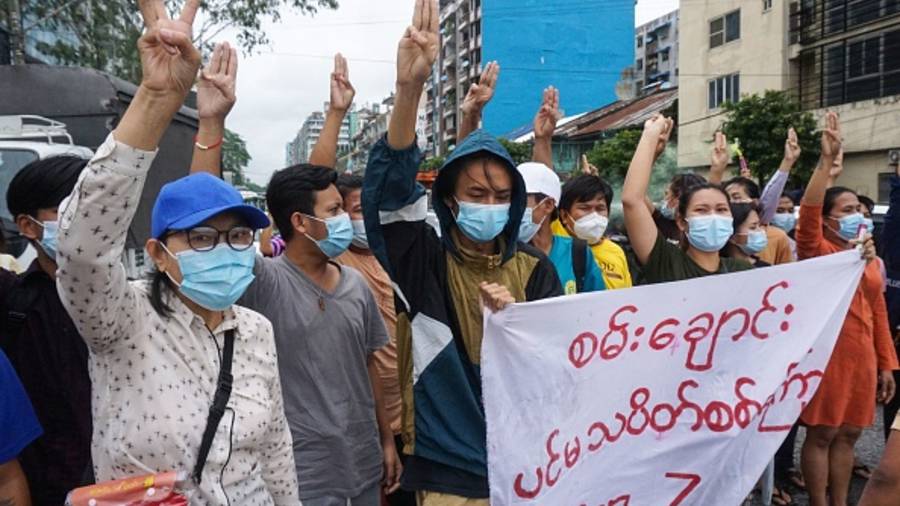 Protesters hold a banner that reads, "Sanchaung main strike Gen Z" as they make the three-finger salute during a demonstration against the military coup in Yangon
Getty Images
Reuters   |   Bangkok   |   Published 23.06.21, 02:37 AM

Myanmar security forces backed by armoured vehicles clashed on Tuesday with a newly formed militia group in the second-biggest city of Mandalay resulting in at least two casualties, according to members of the group and media reports.

Since the army seized power on February 1 and removed the elected government of Aung San Suu Kyi, the security forces have put down protests opposing military rule. In response, groups of opponents of the coup known as people’s defence forces have sprung up across Myanmar.

Up to now, fighting involving lightly armed militias has been mainly confined to small towns and rural areas, but a group claiming to be Mandalay’s new People's Defence Force said its members responded after the army raided one of its bases.

“The fight has started. There will be more fights,” a member of the militia identified as Captain Tun Tauk Naing said by telephone.

The sound of repeated gun fire could be heard in video footage taken by a resident of the area.

About 20 soldiers had carried out the raid on the group sparking a gun fight with the military which deployed three armoured cars to the area, Myanmar Now reported.

Another official from the militia group told the Mizzima news portal that six of its members had been arrested and two soldiers had been killed.

A spokesman for the junta did not answer calls seeking comment.

The army-owned Myawaddy Television, in a report on its Telegram message channel, said security forces had raided a house and “armed terrorists” had fought back with small weapons and bombs. It said four “terrorists” had been killed.