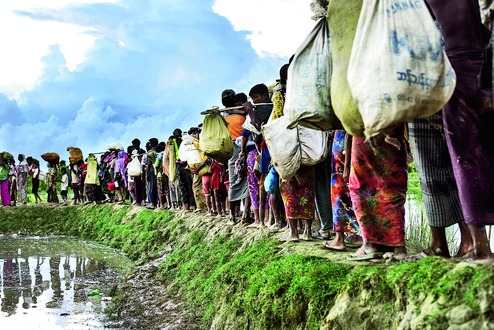 Myanmar officials visited camps for Rohingya Muslim refugees in Bangladesh on Wednesday in an effort to kickstart a process to repatriate hundreds of thousands who fled an army crackdown last year.

Officials said after meetings in Dhaka on Tuesday returns would begin next month, but the UN refugee agency said conditions in Rakhine state were “not yet conducive for returns”.

The agency had completed the second phase of assessment in Rakhine, but its access remained “limited”, UNHCR spokesman Andrej Mahecic said in Geneva on Wednesday.

Rohingya and other Muslims in three townships suffer hardship and economic vulnerability due to restrictions on their movement and the prevailing sentiment is “fear and mistrust”, he said.

A group of about 60 Rohingya leaders met a delegation of about a dozen Myanmar officials in the Kutupalong camp, the largest refugee settlement in the world in Cox’s Bazaar district, said two Rohingya men who were present. Myanmar says it has been ready to accept back the refugees since January, and has built camps near the border to receive them.