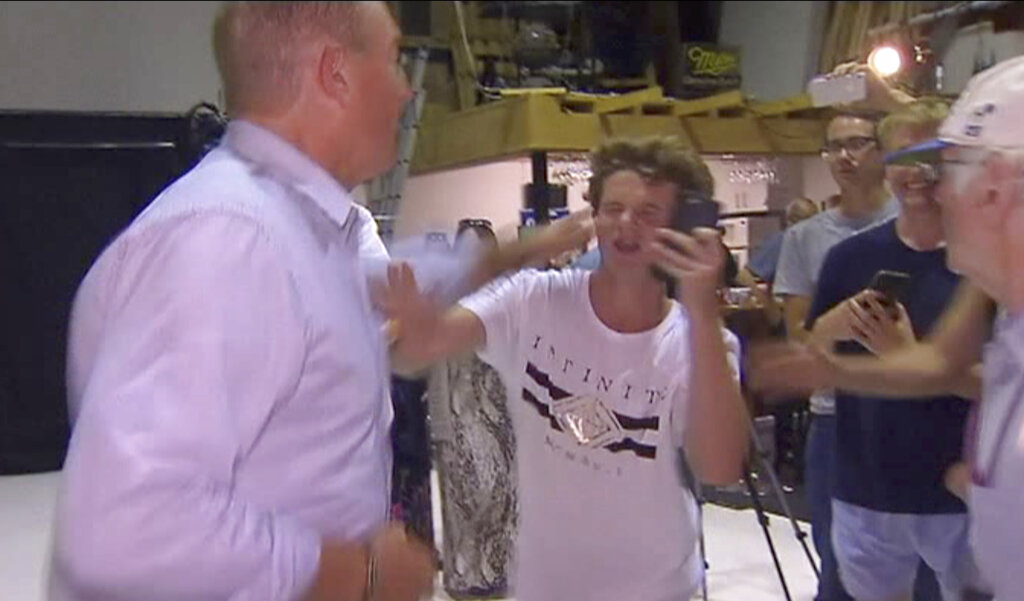 Money raised for a teenager who shot to worldwide fame after smashing an egg on the head of an Australian far-Right politician will go toward the victims of the New Zealand mosque shootings, according to his fundraising page.

On Tuesday morning, a GoFundMe page for Will Connolly, now commonly known as Egg Boy, had already surpassed its goal of raising 50,000 Australian dollars, about $35,000. An update on the page said Connolly, 17, “plans to send a majority of the money to the victims of the Christchurch terror attack”. The funds were originally intended to cover his legal fees and to help him buy “more eggs”.

The teenager gained fame after smashing an egg on the head of Fraser Anning, an anti-immigration senator, as the senator spoke to reporters in Melbourne, Australia, on Friday. The incident happened after Anning was widely condemned for a statement he made that day blaming Friday’s massacre in Christchurch, New Zealand, on Muslim immigration.

After getting hit with the egg, Anning turned around and struck Connolly in the face twice. A brawl broke out that ended with Connolly being pinned down by men in the crowd. Conolly was arrested at the scene and released pending further investigation, police said.

As video of the incident went viral, people around the world have rallied around “Egg Boy” as a hero and symbol in the fight against bigotry. Connolly has been offered concert tickets for life and free vacations, and he has been portrayed in street art and on T-shirts.

But Anning deplored his behaviour in remarks on Monday.

“He got a slap across the face, which is what his mother should have given him long ago because he’s been misbehaving badly,” Anning told reporters in Brisbane. The senator refused to apologise for his comments on the shooting, saying it was a “statement of fact”.

More than a million people have signed a petition calling for Anning’s resignation. Political leaders, including Prime Minister Jacinda Ardern of New Zealand and Scott Morrison, her Australian counterpart, have condemned the senator’s statement.

Connolly has not responded to requests for comment. According to screenshots from the GoFundMe page, he has said he is “under strict restrictions to limit his posts on social media”.

While his Twitter account has been suspended, Connolly’s initial response to the egg smashing was saved and circulated by other users. “This was the moment I felt so proud to exist as a human being,” he wrote. “Let me inform all you guys, Muslims are not terrorists and terrorism has no religion. All those who consider Muslims a terrorist community have empty heads like Anning.”

“Don’t egg politicians,” he added in a video recorded after the incident. “You get tackled by 30 bogans at the same time. I learned the hard way,” he said, using a derogatory but sometimes affectionate term for uncouth Australians.