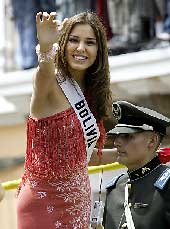 La Paz (Bolivia), May 29 (Reuters): Bolivia’s entrant in next week’s Miss Universe contest faced calls to quit yesterday after she described herself as being a tall, white woman and not a short Indian peasant.

The remarks by Gabriela Oviedo, 21, caused furour in Bolivia, one of the western hemisphere’s poorest countries.

“Unfortunately, people that don’t know Bolivia very much think that we are all just Indian people... poor people and very short people and Indian people,” local media quoted her as saying in English in Ecuador, where the Miss Universe pageant will be held on Tuesday.

“I’m from the other side of the country... and we are tall and we are white people and we know English,” she added.

Bolivia’s vice-minister of culture Maria Isabel Alvarez Plata condemned Oviedo’s remarks as “racist” and the Eastern Confederation of Indian Peoples, a major peasant group, called for her resignation. Oviedo told local television she felt “very bad” about the interview and had not meant to offend anyone.

Bolivia was engulfed by a violent Indian rebellion last year in which dozens of people died in protests that ousted President Gonzalo Sanchez de Lozada. Indian groups referred to him as “the gringo” because of his pale complexion and US-accented Spanish.