Man charged in mail-bomb plot is a Trump supporter 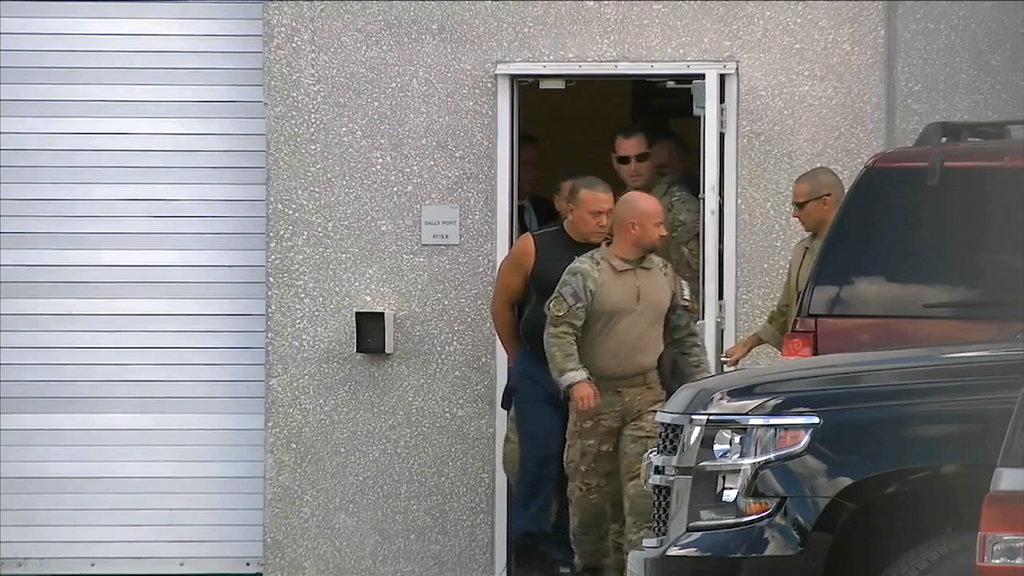 Federal authorities have captured a Florida man with a criminal history and a fervour for President Donald Trump and accused him of sending at least 13 mail bombs to prominent Democrats, capping a nationwide search in a case that spread fear of election-season violence with little precedent in the US.

Justice Department officials on Friday announced five federal charges against Cesar Sayoc, 56, of Aventura, Florida, and revealed that DNA and a fingerprint found on an envelope package helped them identify the suspect after a five-day, coast-to-coast investigation. Even as he was arrested and charged, investigators scrutinised new suspicious packages believed to be tied to his plot.

FBI officials did not disclose a motive, although Attorney General Jeff Sessions suggested politics may have played a role, noting Sayoc appeared to be a “partisan”.

Those who saw him in the neighbourhood, unmistakable in a white van plastered with Trump’s image and political stickers, described him as unsettling and troubled.

Sayoc’s social media profiles portray a deeply disaffected conservative who trafficked in online conspiracy theories, parody accounts and name-calling. He called a Florida school shooting survivor a “fake phony”, peddled theories about George Soros, the billionaire political donor targeted this week by a package bomb and denigrated other Democrats who were later the intended recipients of explosive packages.

An amateur body builder and former stripper who once spent time on probation for a bomb threat charge, Sayoc first registered as a Republican voter just ahead of the March 2016 Republican primary and quickly identified himself as a proud Trump supporter, tweeting and posting on Facebook videos that appear to show him at Trump rallies.

He appeared to be to living in his van, showering on the beach or at a local fitness centre. 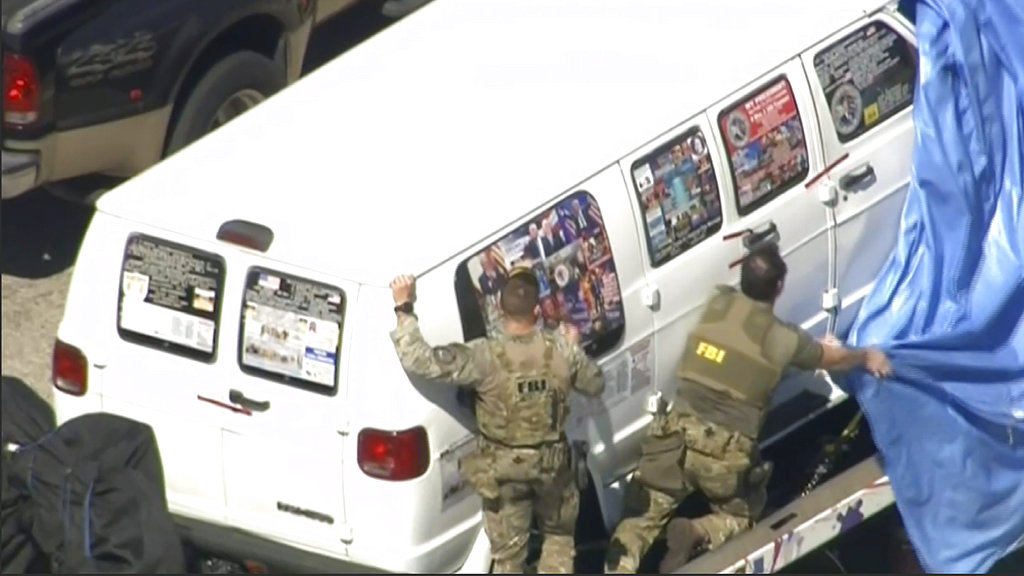 This frame grab from video provided by WPLG-TV shows FBI agents covering a van as it was transported from Plantation, Florida, on Friday.
AP

Sayoc’s arrest on Friday was a major breakthrough in the nationwide manhunt following the discovery of explosive devices — none of which detonated — addressed to prominent Democrats and other frequent targets of conservative ire, including former President Barack Obama, former Vice-President Joe Biden, Hillary Clinton and the cable network CNN. On Friday, new packages addressed to New Jersey Sen. Cory Booker and former National Intelligence Director James Clapper were intercepted — both similar to those containing pipe bombs discovered earlier in the week.

Investigators in California scrutinised a package sent to Democratic Sen. Kamala Harris, her office said, and one sent to Tom Steyer, a billionaire businessman who has campaigned for months for Trump’s impeachment.

The mail bombs, coming barely a week before major midterm elections, sparked a heated national conversation about the hard-edged political climate and Trump’s role in fanning the flames. The President has branded the media the “enemy of the people” and hurled harsh, personal insults at others targeted in the plot.

Shortly after Sayoc was detained, Trump declared that “we must never allow political violence to take root in America” and that Americans “must unify”.

Speaking later to reporters on Friday evening before leaving for a political rally in North Carolina, Trump said he knows Sayoc supported him but that he himself “bears no blame”. Hours earlier, Trump had complained via a tweet that “this 'bomb' stuff” was taking attention away from the upcoming election and that critics were wrongly blaming him.

FBI and police officials worked swiftly to untangle clues this week as the packages mounted, sometimes several in the same day.

The big break came when a fingerprint found on one of the packages, intended for California Rep. Maxine Waters, matched a fingerprint of Sayoc’s on file with Florida authorities. A DNA sample from a device intended for Obama similarly matched the suspect’s DNA, the FBI said.

An additional clue: Misspellings from his online posts matched mistakes found on the packages, according to an 11-page criminal complaint that included the formal charges of threatening former presidents and transporting explosives across state lines. 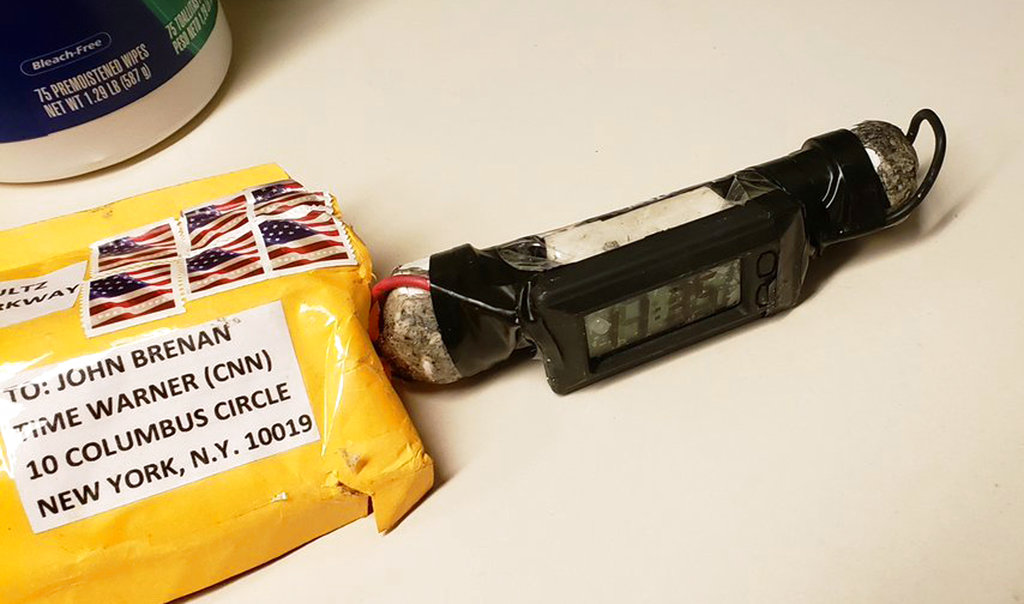 This image obtained provided by ABC News shows a package addressed to former CIA head John Brennan and an explosive device that was sent to CNN's New York office.
AP

Some packages included photographs of the intended recipients marked with a red “x”, the FBI said. The packages contained timers and batteries, but were not rigged to explode upon opening. Officials were uncertain whether the devices were poorly designed or never intended to cause physical harm.

Authorities noted that they included “energetic material”. A footnote to the charging document said such explosive material “gives off heat and energy through a rapid exothermic reaction when initiated by heat, shock or friction”

“These are not hoax devices,” FBI director Chris Wray said.

Sayoc was arrested near an auto parts store in Plantation, Florida, north of Miami. Across the street, Thomas Fiori, a former federal law enforcement officer, said he saw about 50 armed officers swarm a man standing outside a white van. They ordered him to the ground, Fiori said, and he did not resist.

Sayoc appears to have been living on the margins, regularly running into trouble with the law and struggling to make ends meet. He was repeatedly arrested for theft in the 1990s, faced felony charges of possession of anabolic steroids in 2004 and was convicted of grand theft in 2014. In 2002, he served a year of probation for a felony charge of threatening to throw or place a bomb.

His lawyer in that case said the charge stemmed from a heated conversation with a Florida utility representative.

Ronald Lowy, a Miami attorney, said Sayoc showed no ability at the time to back up his threat with any bomb-making expertise.

Sayoc had $4,175 in personal property and more than $21,000 in debts when filed for bankruptcy in 2012. “Debtor lives with mother, owns no furniture,” his lawyer indicated in a property list.

He had been an amateur body builder. More recently he was seen at an LA Fitness in Aventura, regularly showering at the gym but not working out, said Edgar Lopez, 48, a therapist who works out at the gym.

Marc Weiss saw Sayoc nearly every morning at 6 am. for the last four or five months

“I’ve seen the guy maybe 80 times and I never said a word to him because I had a feeling he was a little off,” said Weiss, a 56-year-old building superintendent who has lived in the neighborhood for eight years. “This guy had an air about him that was unsettling.”

Sayoc’s political awakening appears to have coincided with Trump’s rise. He registered to vote in Florida in March 2016 and has voted early since, records show.

Documents released on Friday by the Broward County Sheriff’s Office show Sayoc reported in May 2015 that more than $40,000 in goods were stolen from his van and an attached trailer, including 11 pieces of Donald Trump-brand clothing valued at $7,150. Specifics are not included, but Trump has a line of suits, shirts, ties and accessories.

The report shows detectives were never able to confirm whether the theft actually happened, and no arrests were made.

Most of those targeted this week were past or present US officials, but packages also were sent to actor Robert De Niro and billionaire George Soros. The bombs have been sent across the country — from New York, Delaware and Washington, D.C., to Florida and California, where Waters was targeted. They bore the return address of Florida Rep. Debbie Wasserman Schultz, the former chairwoman of the Democratic National Committee.