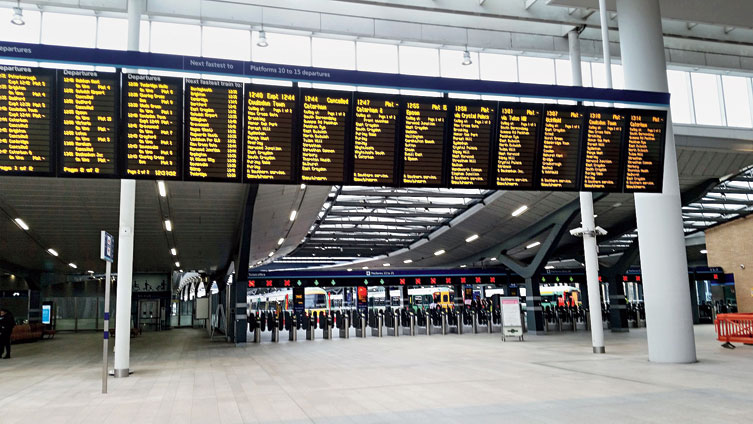 London was on Thursday a city of fear and masked citizens as the capital of once the greatest empire in the world moved into partial lockdown with 40 Underground stations being closed.

The move came as the 93-year-old Queen, shifted along with Prince Philip, 98, from Buckingham Palace to Windsor Castle to protect them from the coronavirus hotspot in London.

Her words had the echo of wartime Britain as she spoke of the nation “entering a period of great concern and uncertainty”.

“At times such as these, I am reminded that our nation’s history has been forged by people and communities coming together to work as one, concentrating our combined efforts with a focus on the common goal,” she said.

She added: “We are enormously thankful for the expertise and commitment of our scientists, medical practitioners and emergency and public services; but now more than any time in our recent past, we all have a vitally important part to play as individuals — today and in the coming days, weeks and months.

“Many of us will need to find new ways of staying in touch with each other and making sure that loved ones are safe. I am certain we are up to that challenge. You can be assured that my family and I stand ready to play our part.”

In hospitals, cancer patients are being warned that when it comes to continuing treatment, there will be a system of priorities based on age, the extent of the disease and chances of survival.

The government is rushing through emergency legislation — a 329-page Coronavirus Bill — which “enables action to increase the available health and social care workforce, ease the burden on frontline staff, slow the spread of the virus, manage the deceased with respect and support people through the crisis”.

The legislation sets out powers for the police to detain people suspected of having coronavirus and send them for testing. People who fail to do so could be fined up to £1,000.

Other measures include powers for ministers to write to an operator of a port requiring their operation be suspended and for events or gatherings to be cancelled.

Food suppliers would also have to provide information to the appropriate authority if all or part of a food supply chain is being disrupted or is at risk of disruption.

Under the proposed laws, airports could be shut and people held on public health grounds, while immigration officials could place people in isolation. The powers would be time limited to two years under the proposals.

Indians who come to London for holidays or work will be familiar with several of the stations being shut. They include, for example, Charing Cross, Queensway, Bayswater, Temple, St James’s Park, Gloucester Road, Covent Garden and Hyde Park Corner.

London mayor Sadiq Khan has urged people to avoid the transport network: “People should not be travelling by any means unless they absolutely must.”

The Daily Telegraph and the Daily Mail both reported that the capital might be locked down “by the weekend”. Ministers say that there are no plans to do this at the moment but Boris Johnson said he would “rule nothing out” when the Prime Minister was asked about a possible London shutdown.

A grim sign of the times was evident in Westminster where workmen were seen expanding the public mortuary. The number of people who have died from Covid-19 in England has risen to 137 — up 33 in 24 hours.

Schools across the country have been shut though children of doctors, hospital staff, drivers who deliver food and essential supplies and police will be looked after by a handful of teachers.

The government has announced that all exams, including GCSE and A levels, are abolished for this summer but final year students will still be given grades and be eligible to go to university without losing a year.

Exactly how students will be given their grades when there are no exams is still unclear. One suggestion is that the A-level grades – all important for university entrance – will be based on teacher predictions, mock results and coursework from the past 12 months.

Students will apparently be able to appeal if they feel they have been marked down.

Education secretary Gavin Williamson said the government will work with schools, colleges and England’s exams regulator, Ofqual, “to ensure children get the qualifications they need”.