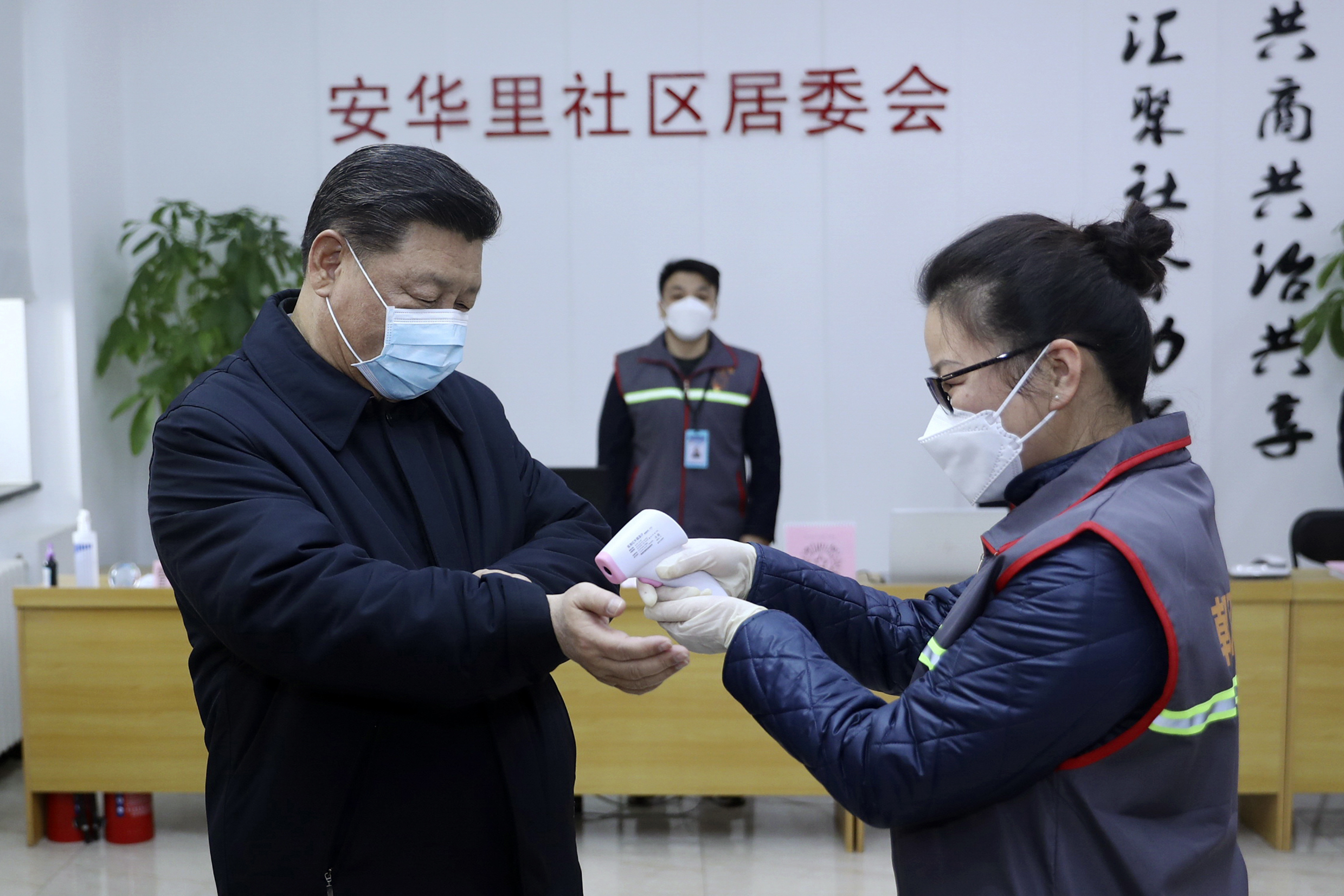 When he stepped inside the municipal office five miles north of the Forbidden City, China’s most powerful leader in decades pulled up the sleeve of his black overcoat and held out his wrist. A woman in a mask and surgical gloves then checked to see if he had a fever.

It was Xi Jinping’s first public appearance since meeting the Cambodian Prime Minister last week, and one of only a handful since the epidemic exploded into a crisis last month. It showed him on what state media declared the “front line” of China’s efforts to combat the coronavirus epidemic — even if the actual centre of the outbreak lies 600 miles south in the city of Wuhan.

Xi’s appearance kicked off an unusual, unannounced blitz around Beijing on the day the city was supposed to return to work after a prolonged holiday break but did not.

He visited a neighbourhood community centre, a hospital and a centre for disease control in Chaoyang, one of the capital’s largest districts. And for the first time, he also spoke directly — via video conferencing — to those most directly fighting the outbreak: medical workers in Wuhan who stood in rapt formation on the other end of the line.

Xi, wearing a powder blue surgical mask, declared Wuhan “a city of heroes”, according to a commentator on CCTV’s flagship nightly news programme. He also called the outbreak a “people’s war”.

“We must have confidence that we will win,” he said in one of the video calls.

The Chinese leader’s retreat from centre stage has raised speculation about his role and the internal dynamics of the Communist Party leadership at a time it is facing its gravest public health challenge since the Sars epidemic 17 years ago.

Xi’s tour on Monday appeared intended to put such questions to rest.

State TV portrayed his meetings as a demonstration of his central role in directing the government’s response. It also seemed designed as a display of empathy for ordinary people whose lives have been upturned by the outbreak and the government-imposed measures to stop it.

The temperature checks that Xi had to endure — at the community centre and again at the hospital — have become a recurring experience for millions of Chinese entering practically any public space, from the subway to shopping centers. Anyone with signs of a fever can be denied entry and sent home or, in worse cases, sent directly to hospitals for testing and possible quarantine.

Wu Qiang, an independent political analyst in Beijing, said that the worsening epidemic had created “pressure from the public and inside the party” for Xi to show that he was, as often reported, “personally directing” the government’s response. He said it also reflected the political concerns about the outbreak’s effects on China’s most important cities.

“It has become a matter of political security,” Wu said. “Political security does not mean in the sense of popular resistance but rather that the epidemic may spread to Beijing and Shanghai, endangering the political operations of the so-called capital areas.”

Xi rarely mingles with the public. In a video released on Monday on the website of Beijing’s municipal government, he appeared on a sidewalk outside the municipal office in the Anhuali neighbourhood in Beijing, where he looked up and waved at people gathered at apartment windows to watch the spectacle unfolding below.

He also chatted briefly with a handful of residents, including two carrying grocery bags. Everyone, per orders issued by the government, wore masks.

“Let’s not shake hands in this special time,” Xi said, prompting laughter from those around him. Then he asked, “How much do the vegetables cost?”

Xi was accompanied during his appearances by senior officials, including the Communist Party secretary for Beijing, Cai Qi, and the city’s mayor, Chen Jining.

Xi also visited Ditan Hospital, located nearby the municipal office. He donned a white doctor’s coat, though television reports did not show him meeting with any patients. According to the government’s latest count, there have been 337 confirmed coronavirus cases in Beijing and two deaths, the most recent on February 7.

Xi has yet to visit Wuhan. That task fell to Premier Li Keqiang, the country’s No. 2 official, and Vice-Premier Sun Chunlan, who has led the response there in recent days.

But at the hospital and later at the disease control office in Chaoyang, Xi greeted workers and officials there via video links.

They included a government meeting in Wuhan conducted by Sun, now the senior official on the ground in Hubei, as well as calls with doctors and nurses in several hospitals, including one built in a matter of days after the city of 11 million was locked down.

“Here, on behalf of the Central Party Committee,” Xi told them, “I extend my high respect and heartfelt thanks to you and to the medical workers in the fight against the epidemic throughout the country.”