John, who was 52, had been staying since November 1 at the Hotel Emma, a 146-room luxury boutique hotel in downtown San Antonio 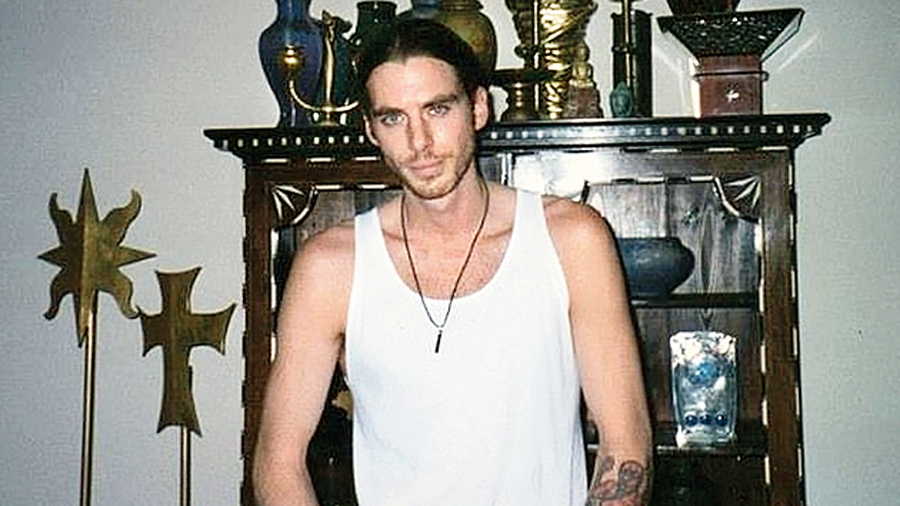 John Gilbert Getty, a grandson of the late oil baron, J. Paul Getty, died on November 20 but a new twist in the tragedy suggests his body was in the Padmasana (lotus) yoga pose when it was found in a hotel room in San Antonio, Texas.

John Paul Getty, once considered the richest man in America, died, aged 83, in 1976. There are several heirs to his fortune, now estimated to be worth $5 billion, of which John was one.

The family has had more than more than its fair share of both wealth and tragedy.

According to reports in America, “the pose which John Gilbert Getty was found in is when a person sits with their legs tightly crossed with the soles of their feet facing the ceiling”.

John, who was 52, had been staying since November 1 at the Hotel Emma, a 146-room luxury boutique hotel in downtown San Antonio. A hotel staffer told police he entered

John’s room because it had passed the noon check out time and housekeeping had not been able to get hold of him. When he entered he found John on the bed, “cold to the touch”, and that he was unable to wake him.

The San Antonio Police Department report, compiled by Officer Rosendo Hoyos, refers to John as SB1 and the hotel staffer as R1. John was staying in a $500 a night suite.
It read: “SB1 was found upstairs lying back on some pillows from an Indian style sitting position on his bed in front of his laptop.
“SB1 had his glasses in his left hand, eyes were open, mouth was open.”

The officer said there were no signs of foul play and everything appeared “neat and orderly”. The autopsy report is not yet available.

In the report, it also stated that John’s assistant, “O2”, had last received a text from him on November 19 at 5.28pm — the day before he died. A block has been put on any information being released publicly by the Bexar County Medical Examiner’s Office —  which is “an unusual step to take”.

Police apparently found an alleged drug dealer’s number on his phone saved under ICE — the street name commonly used to describe the drug crystal methamphetamine.
The report refers to the individual, “NOK 01”, whom the police contacted but the person — “possibly a drug dealer” — claimed he had not talked to John in years.
John was the son of composer Gordon Getty, 86, who has now lost his wife and two of his seven children within five years.

When John’s death was announced, the family released a statement: “With a heavy heart, Gordon Getty announces the death of his son, John Gilbert Getty. John leaves behind his daughter, Ivy Getty, whom he loved beyond measure, and his brothers Peter and Billy. His brother, Andrew, predeceased John. John’s mother, Ann Gilbert Getty, passed this September.

John was a talented musician who loved rock and roll. He will be deeply missed.”

John’s daughter, Ivy Love Getty, 25, posted memories on Instagram about her father’s love of rosé wine and how he would put ice cream in the fridge for 30 minutes before he would “drink it like soup”.

Ivy said she was proud to be the only “consistent” woman in his life: “My father was awesome — the coolest man to ever land on this planet and I will forever be the proudest daughter.”

In 2015, John’s brother Andrew died aged 47 from an intestinal haemorrhage.

He was found to have a toxic level of methamphetamine in his system. Two months ago, Gordon’s wife Ann passed away from a heart attack, aged 79.

The latest death in the family is part of the long and sorry saga of the Getty clan, which includes the 1973 Mafia kidnapping of 16-year-old John Paul Getty III.

His grandfather, John Paul Getty, refused to pay the ransom of £12 million (equivalent to £70 million today) so the “mob” cut off the boy’s ear
and sent it to a newspaper in Rome.

John Paul Getty eventually paid up, but only after the US government negotiated a ransom figure of about £1.6million, “the maximum that would be tax deductible”.

he kidnapping was the subject of Ridley Scott’s 2017 movie All The Money In The World.