'Putin was wrong, we were ready' 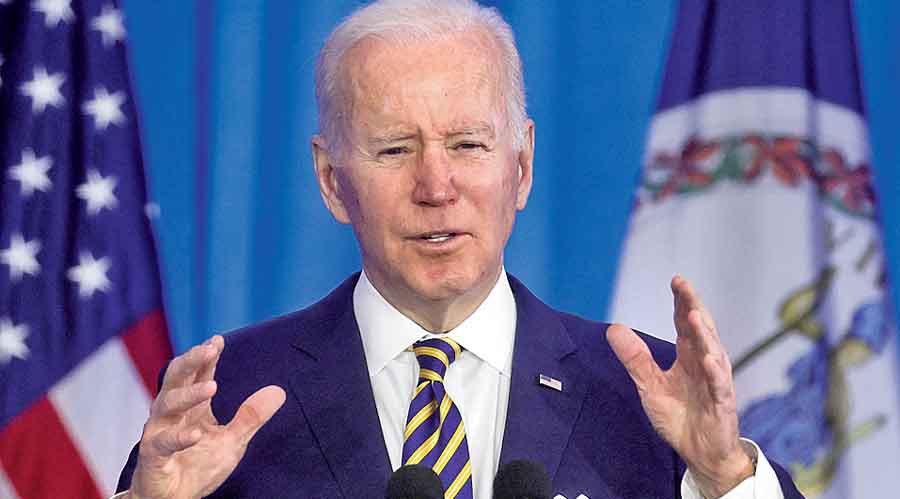 U.S. President Joe Biden will accuse Russian President Vladimir Putin of having misjudged the West with an unprovoked invasion of Ukraine and will order a U.S. ban on Russian flights in American airspace on Tuesday in his State of the Union speech.

The annual speech to Congress gives Biden, a Democrat, a chance to highlight his agenda, reassure Americans concerned about COVID-19 and inflation, and seek to boost his sagging poll numbers with a show of presidential pomp.

Russia's invasion of Ukraine has dominated the White House's time in recent weeks, prompting Biden to reshape the speech to a focus on his efforts to unite Americans around a global effort to punish Moscow and support Kyiv.

"Throughout our history we've learned this lesson - when dictators do not pay a price for their aggression, they cause more chaos. They keep moving. And, the costs and threats to America and the world keep rising," Biden will say, according to excerpts of his address released by the White House.

Biden will say that Putin eschewed efforts to prevent war.

"Putin's war was premeditated and unprovoked. He rejected efforts at diplomacy. He thought the West and NATO wouldn't respond. And, he thought he could divide us here at home," Biden will say. "Putin was wrong. We were ready."

Battling rising inflation exacerbated by the Russian crisis and assailed by Republicans who accused him of allowing it to get out of control, Biden will call for companies to make more cars and semiconductors in the United States.

Biden and his fellow Democrats face the prospect of losing control of the U.S. House of Representatives and Senate in Nov. 8 midterm elections. An uptick in Biden's approval ratings might help prevent that and strengthen his chances of making good on his agenda.

Public opinion polls have shown Biden out of favor with the majority of Americans for months.

Americans' approval of Biden's response to the Russian invasion rose over the past week, with 43% saying they approve in a Reuters/Ipsos poll completed on Tuesday, up from 34% last week. Some 47% disapproved of Biden response's to the crisis, however, and his overall popularity has held near the low point of his presidency in recent weeks.

Even with the jobless rate at 4%, most voters remain pessimistic about the economy, largely due to skyrocketing consumer prices. A quarter of Democrats think the party has failed to take advantage of its rare control of the White House and both houses of Congress.

Iowa Governor Kim Reynolds, who will deliver the Republican response to Biden's speech, will knock his handling of the Ukraine crisis and the U.S. inflation spike.

"Instead of moving America forward, it feels like President Biden and his party have sent us back in time to the late ‘70s and early ‘80s. When runaway inflation was hammering families, a violent crime wave was crashing on our cities, and the Soviet army was trying to redraw the world map," she will say, according to excerpts.

Republicans say the country has not moved quickly enough to ease coronavirus pandemic restrictions as case counts fall. More than 2,000 Americans are dying daily of COVID, the latest 7-day average shows, the most of any country in the world.

On Tuesday, members of Congress attending Biden's speech at the U.S. Capitol will not be required to wear masks for the first time in months, a sight that could provide helpful optics for the president.

Authorities reinstalled fencing around the Capitol ahead of planned trucker protests against pandemic-related restrictions, but it did not appear that the convoys would cause major disruptions.

The Ukrainian ambassador to the United States, Oksana Markarova, was due to attend the speech, sitting with the president's wife, Jill Biden. So will Pat Gelsinger, chief executive officer of Intel Corp , as the Biden administration seeks to showcase efforts to bolster chip supplies.