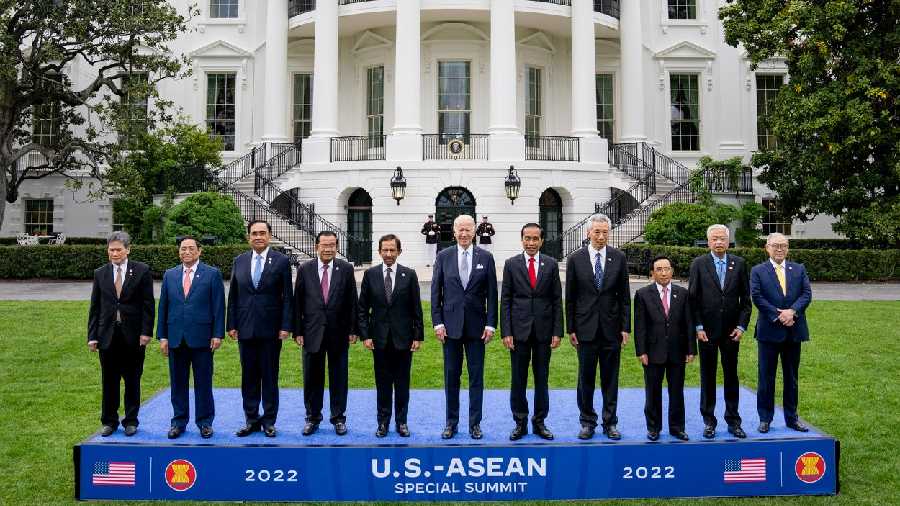 US President Joe Biden kicked off a summit for the Association of Southeast Asian Nations (ASEAN) by holding a dinner for the bloc's leaders at the White House on Thursday evening.

The first-ever meeting of the two-day ASEAN summit to be held in Washington comes as the US seeks to solidify ties with Southeast Asian countries as part of its Indo-Pacific strategy in response to China's expansion.

Ahead of the dinner, the White House pledged around $150 million (€144.3 million) in support for ASEAN countries with initiatives for clean energy and maritime security.

This evening, I welcomed ASEAN leaders to the White House for the first time in history, and reaffirmed the U.S. commitment to Southeast Asia. We discussed the importance of working together to ensure security, prosperity, and respect for human rights for our one billion people. pic.twitter.com/nu6X5Lh2eh

"I hope this meeting can build a momentum for the return of the US presence in the region," Indonesian President Joko Widodo told a forum of the US-ASEAN Business Council before heading to dinner at the White House.

What the $150 million package entails

The White House committed $60 million to new maritime initiatives, including the deployment of a Coast Guard vessel and personnel to fight crimes at sea. US officials said the funds would also be used to counter what the US describes as illegal fishing by China.

It also said it was working with the private sector to raise funds of up to $2 billion.

By comparison, the White House earlier this week announced a $40 billion military and humanitarian package for Ukraine as it fights the Russian army. The modest sum also pales in comparison to China's deep ties in the region.

Biden is working on other initiatives to bolster economic cooperation in the region, like "Build Back Better World" infrastructure investment and an Indo-Pacific Economic Framework (IPEF). But few details have been revealed about both plans.

What are ASEAN concerns over China?

China claims nearly all of the South China Sea and stands at odds with four other ASEAN members — Vietnam, Philippines, Brunei, and Malaysia — that claim parts of it.

While the US has stepped up cooperation with other countries in the Indo-Pacific on traditional security matters to counter China, ASEAN members have grown increasingly frustrated by a US delay in detailing plans for economic growth in the region since it quit a regional trade pact in 2017.

"The US should adopt a more active trade and investment agenda with ASEAN, which will benefit the US economically and strategically," Malaysian Prime Minister Ismail Sabri Yaakob said on Thursday.

China is not a member of ASEAN but it is party, along with Japan, South Korea, Australia and New Zealand, to the world's largest trade deal with ASEAN members.

ASEAN is a 10-member bloc that aims at bolstering cooperation and economic growth in the Asia-Pacific region and the countries share Washington's concerns about China.

Biden took a group photo on the South Lawn with leaders from Brunei, Indonesia, Singapore, Thailand, Laos, Vietnam, Malaysia and the Philippines before dinner.

The Philippines was represented by its foreign affairs secretary since the country is in transition amidst the election of Ferdinand Marcos Jr. as president on May 9.

Eight ASEAN leaders are expected to participate in talks on Friday, the final day of the summit.

Biden to travel to Asia next week

Reuters news agency reported that Biden is set to launch IPEF during his whirlwind visit to Asia next week.

Biden is set to travel to South Korea and Japan to meet their new leaders, his first trip to Asia as president of the US.

He is also set to meet with leaders of the so-called QUAD group — which comprises the US, Japan, India and Australia — that has intensified security and economic ties amid concerns over China's rise in the region.