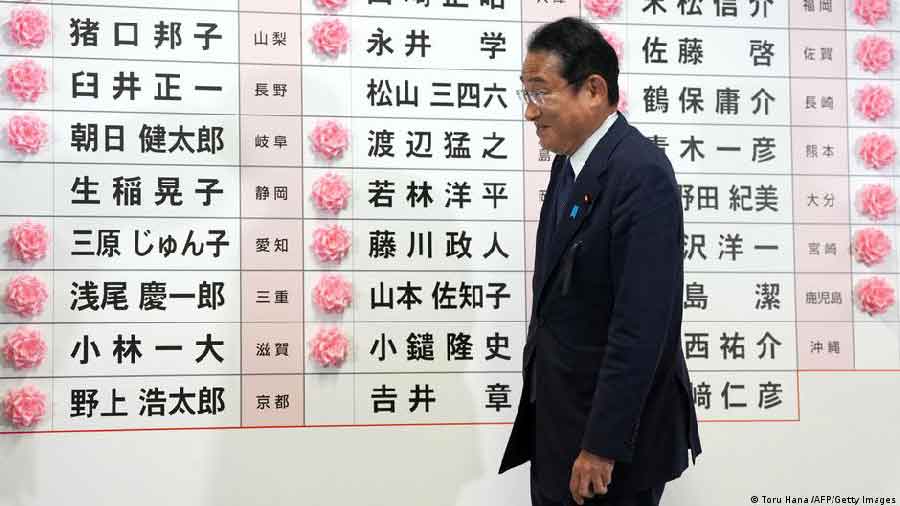 Exit polls in an election in the upper house show that the ruling coalition is securing a majority, two days after former Prime Minister Shinzo Abe was shot and killed during an election campaign event.

Polls closed across Japan on Sunday afternoon for an election in the parliament's upper house, shortly after former Prime Minister Shinzo Abe was shot dead during an election campaign event.

The vote Sunday is expected to expand Abe's ruling Liberal Democratic Party (LDP), along with its coalition partners.

"It's significant we were able to pull this election together at a time violence was shaking the foundations of the election," said Prime Minister Fumio Kishida, an Abe protege.

Exit polls project the LDP has maintained its majority with its junior coalition partner, winning over half of the 125 contested seats, according to local media reports.

Election turnout stood at 23% as of 4 p.m. local time (0700 GMT), according to the Ministry of Internal Affairs. Government data suggests some 15.3% of voters had already cast absentee ballots by Friday.

Official results should be out by Monday. But the party was already expected to receive a surge of support after Abe's assassination.

"We just lost Mr. Abe. I would like the LDP to win many votes so that they can run the country in a stable manner," 67-year-old pensioner Sakae Fujishiro told the Reuters news agency as he cast his vote for the ruling party in Tokyo's eastern Edogawa ward.

Sunday's vote was expected to solidify Kishida's hold on power, putting him in a better position for "golden three years" in which he will face no further elections.

Still, he faces rising prices and energy shortages after an early summer heat wave led to a power crunch.

Police have acknowledged "problems with guarding and safety measures" during the event when Abe was gunned down, promising a comprehensive investigation.

"In all the years since I became a police officer in 1995... there is no greater remorse, no bigger regret than this," the Nara Regional Police Head Tomoaki Onizuka said in a press briefing late on Saturday.

Nara police announced the seizure of belongings of the murder suspect; a motorcycle and a vehicle. The 41-year-old said he used the wooden boards retrieved from the vehicle for test-firing the homemade weapon used in attacking Abe.

He said the attack took months of planning. He said it was a response to Abe's alleged links to a religious group which the unemployed suspect blames for his mother's financial woes.

US Secretary of State Antony Blinken has scheduled a stop in Tokyo on Monday to offer his country's condolences over the death of Abe in person. Blinken is in Asia already for meetings.

German Foreign Minister Annalena Baerbock is also currently in Japan. She visited the Nagasaki nuclear bombing memorial on Sunday and will be in Tokyo on Monday.