Spain closes all schools around its capital 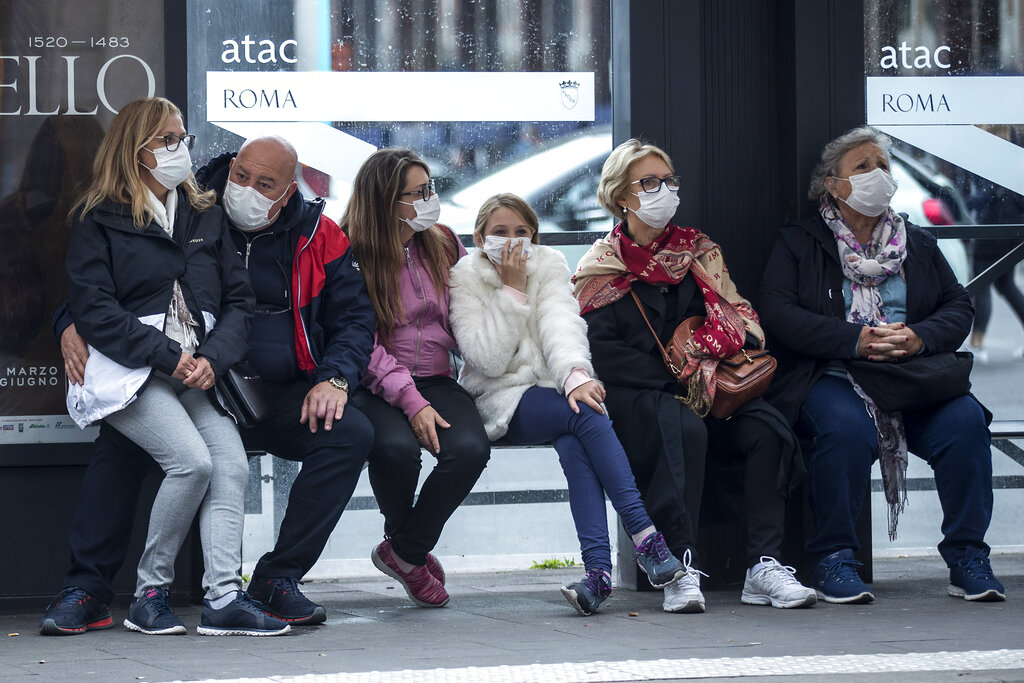 People wait at a bus stop, in Rome, Monday, March 9, 2020. Italy announced a sweeping quarantine early Sunday for its northern regions, igniting travel chaos as it restricted the movements of a quarter of its population in a bid to halt the new coronavirus' relentless march across Europe.
AP
PTI   |   New Delhi   |   Published 10.03.20, 05:20 AM

The battle to halt the coronavirus brought sweeping new restrictions Monday, with Italy expanding a travel ban to the entire country, Israel ordering all visitors quarantined just weeks before Passover and Easter, and Spain closing all schools in and around its capital.

Even as workers in Beijing returned to their jobs and new infections in China continued to subside, Italians struggled to navigate the rapidly changing parameters of the nation's self-imposed lockdown.

The fears fanned by the virus sent Wall Street stocks tumbling to their biggest drop since 2008, with the Dow Jones Industrial Average down 7.8%. Global oil prices suffered their worst percentage losses since the start of the 1991 Gulf War.

'Now that the virus has a foothold in so many countries, the threat of a pandemic has become very real,' said World Health Organization chief Tedros Adhanom Ghebreyesus. 'The great advantage we have is the decisions we all make as governments, businesses, communities, families and individuals can influence the trajectory of this epidemic.'

More than 113,000 people have been infected with the virus, and more than 3,900 have died of the COVID-19 illness it causes. Most of the cases are in China, but its proportion is shrinking as the caseload grows elsewhere. More than 62,000 people have already recovered. But Italy's intensifying struggle to halt the virus' spread emerged as a cautionary tale.

'There won't be just a red zone,' Italian Prime Minister Giuseppe Conte said, in announcing that a lockdown covering about 16 million people in the north would be expanded to the entire country starting Tuesday.

Italian doctors celebrated one small victory after the first patient diagnosed with the illness, a 38-year-old Unilever worker, was moved out of intensive care and began breathing on his own. But the virus' rapid spread was forcing them to operate like war-time medics, triaging patients to decide who get access to scarce ICU beds.

Travelers at Milan's main train station had to sign police forms self-certifying that they are traveling for 'proven work needs,'' situations of necessity, health reasons or to return home. Ski lifts were ordered to close after students whose classes were canceled began organizing trips to winter resorts.

Italy's 9,172 cases and 463 deaths are the second-most in the world. China on Tuesday recorded just 19 new cases over the previous 24 hours, its lowest total since it began reporting national figures on Jan. 20.

Inmates at more than two dozen Italian prisons rioted against restrictions on family visits and other containment measures, and six died after they broke into the infirmary and overdosed on methadone.

Pope Francis livestreamed a Mass he celebrated alone but held some meetings.

For most people, the new type of coronavirus first detected in China in December causes only mild or moderate symptoms, such as fever and cough. It can progress to serious illness including pneumonia, especially in older adults and people with existing health problems.

The apparent subsiding of its outbreak came only after Chinese authorities imposed massive quarantines, which are still largely in place. Other virus-hit countries are embracing less strict, but still aggressive measures.

Israel will quarantine anyone arriving from overseas for 14 days, a decision coming barely a month before Easter and Passover.

All St. Patrick's Day parades were canceled in Ireland, including one in Dublin that typically draws half a million to its streets.

All schools in and around Madrid will close for two weeks. The rising number of cases around Spain's capital 'imply a change for the worse,' the country's Health Minister Salvador Illa said.

Trying to send a message of confidence in the economy, French President Emmanuel Macron and his wife walked on Paris' Champs-Elysees avenue. 'I'm shaking hands using my heart,' he said as he waved to people while keeping a 1-meter distance from passersby.

In China, the slow emergence from its extreme quarantine measures spotlighted the virus' continued economic impact.

'Our business is one-fifth of what it was before,' said Cheng Sheng, who helps run a stand in Beijing that sells sausages and noodles. 'There's much less foot traffic. There are no people.'

Infections were reported in more than half the world's countries, and flashpoints were erupting around the globe.

'We are working for valuable time, time in which scientists can research medicines and a vaccine' and in which governments can help stock up on protective equipment, said German Chancellor Angela Merkel, whose country has reported over 1,100 cases and, as of Monday, its first two deaths.

Iranian state television reported another 43 deaths, pushing the official toll to 237, with 7,161 confirmed cases. But many experts fear the scope of the illness in Iran is far wider than reported. South Korea reported 35 more cases, bringing its total to 7,513.

In the United States, where more than 600 infections and 26 deaths have been reported, the Grand Princess cruise ship docked in Oakland, California, after days idling at sea while dozens of those aboard were tested.

Fleets of buses and planes were ready to whisk the more than 2,000 passengers to military bases or their home countries for a 14-day quarantine. At least 21 people aboard have been confirmed to have the infection.

In Washington, the Capitol's attending physician's office said 'several' members of Congress had contact with a person who attended a recent political conference and subsequently developed COVID-19. They 'remain in good health,' the office said. Three members of Congress, Sen. Ted Cruz and Reps. Doug Collins and Paul Gosar, said they are quarantining themselves after determining they had contact with the person.

Qatar cut off travel to 15 countries and said it would shut down schools and universities beginning Tuesday.

Organizers of the annual Holocaust remembrance march in southern Poland postponed it this year due to coronavirus fears, and soccer authorities said at least four major matches — in France, Germany and Spain — would take place with no fans.