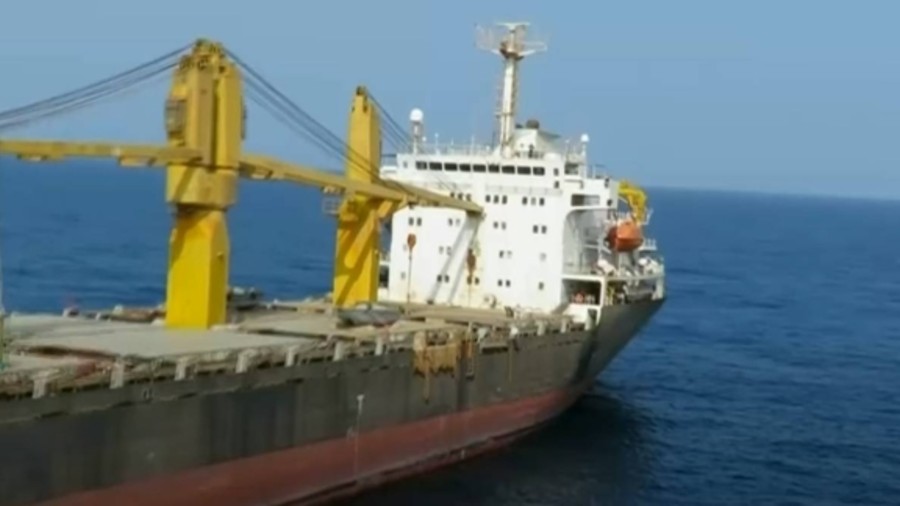 According Ito slamic Revolutionary Guards Corps said the vessel had been deployed in the Red Sea for some time to combat pirates
Twitter/ @Saudi_Gazette
Farnaz Fassihi, Eric Schmitt And Ronen Bergman   |   New York   |   Published 08.04.21, 01:54 AM

An Iranian military vessel stationed in the Red Sea was damaged by an apparent Israeli mine attack on Tuesday in an escalation of the shadowy naval skirmishing that has characterised the two adversaries’ exchanges in recent years.

The damage to the vessel, which the Iranian news media identified as the Saviz, came as progress was reported on the first day of talks to revive American participation in the 2015 nuclear agreement between Iran and major world powers. Israel, which regards Iran as its most potent foe, strongly opposes a restoration of that agreement, which was abandoned by the Trump administration three years ago.

Several Iranian news outlets showed images of flames and smoke billowing from a stricken vessel in the Red Sea, but the full extent of the damage or any casualties was unclear.

The Saviz, technically classified as a cargo ship, was the first vessel deployed for military use that is known to have been attacked in the Israeli-Iranian skirmishes.

There was no official Iranian confirmation of the attack as of Tuesday night, but several Telegram social media channels operated by members of the Revolutionary Guards blamed Israel for the explosion.

Israeli officials had not commented as of Tuesday night, and as a matter of policy they seldom confirm or deny responsibility for actions taken against Iran. But an American official said the Israelis had notified the US that its forces had struck the vessel at about 7.30am local time.

The official, who spoke on the condition of anonymity to share private intelligence communications, said that the Israelis had called the attack a retaliation for earlier Iranian strikes on Israeli vessels, and that the Saviz had been damaged below the water line. The vessel’s precise location in the Red Sea was not immediately clear.

The skirmishes have gone on for two years but have previously involved a different sort of target. Since 2019, Israel has attacked commercial ships carrying Iranian oil and weapons through the eastern Mediterranean and Red Seas, a new maritime front in a regional shadow war.

The American official said it was possible that the attack had been delayed to allow the Dwight D. Eisenhower, an American aircraft carrier in the area, to put some distance between itself and the Saviz. The Eisenhower was about 200 miles away when the Saviz was hit, the official said.

The US Naval Institute published a report in 2020 that asserted the Saviz was a covert military ship operated by the Revolutionary Guards.