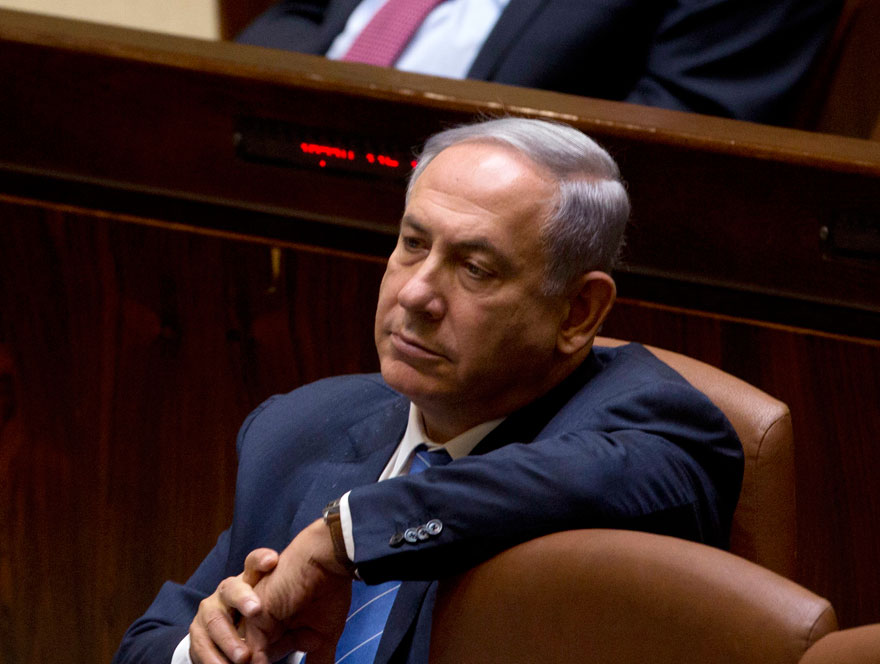 Israel's parliament on Monday passed a preliminary motion to dissolve itself. The move further pushed the country toward an unprecedented political impasse, less than two months after elections seemed to promise Prime Minister Benjamin Netanyahu a new mandate.

If the bill receives final passage in a vote scheduled Wednesday, Israel would be forced to hold new elections — sending the political system into disarray.

Netanyahu appeared to have a clear path to victory, and a fourth consecutive term, after the April 9 elections. His Likud party emerged tied as the largest party in the 120-seat parliament, and with his traditional allies, he appeared to control a solid 65-55 majority.

But he has struggled to form a government ahead of a looming deadline to do so. His prospective coalition has been thrown into crisis in recent days by former Defense Minister Avigdor Lieberman, an ally and sometimes rival of Netanyahu's.

Netanyahu delivered a primetime statement on Monday calling on his potential partners to put 'the good of the nation above every other interest' in order to avoid sending the country once again to 'expensive, wasteful' elections. He placed the blame on Lieberman for creating the crisis, but said he was hopeful his efforts to salvage a compromise in the next 48 hours would succeed.

Lieberman has insisted on passing a new law mandating that young ultra-Orthodox men be drafted into the military, like most other Jewish males. Netanyahu's ultra-Orthodox allies demand that the draft exemptions remain in place.

'The draft law has become a symbol and we will not capitulate on our symbols,' Lieberman defiantly said, vowing to press for new elections if his demands are not met.

Netanyahu and Lieberman met Monday evening in a last-ditch effort to find a compromise. Israeli media said the meeting ended without any progress, and quoted Likud officials as saying Netanyahu would soon order new elections.

Netanyahu's ruling Likud has traditionally had an alliance with ultra-Orthodox and nationalist parties. But Lieberman, a former top Netanyahu aide, is a wild card. Though stanchly nationalist, he also champions a secular agenda aimed toward his political base of immigrants from the former Soviet Union.

Likud insists Lieberman is motivated by his personal spite for Netanyahu and has launched a vicious campaign against him in recent days. But Lieberman says he is driven by ideology and will not be a hand to religious coercion.

'I will not be a partner to a Halachic state,' he said, using the word for Jewish law.

Ultra-Orthodox parties consider conscription a taboo, fearing that military service will lead to immersion in secularism. But years of exemptions have generated widespread resentment among the rest of Jewish Israelis.

A stalemate on the issue was one of the factors that shortened the term of the previous coalition government, which Lieberman resigned from months before elections were called because he disagreed with its policy toward the Gaza Strip.

Dissolving parliament would be a shocking turn of events for Netanyahu, who has led the country for the past decade. 'We invite Lieberman to join us today and not contribute to the toppling of a right-wing government,' a statement by Likud read.

President Donald Trump waded into Israeli politics and tweeted support for Netanyahu, saying he was 'hoping things will work out with Israel's coalition formation and Bibi and I can continue to make the alliance between America and Israel stronger than ever.'

With the 42-day timeline allotted to Netanyahu to sign agreements with his partners and present his new government set to expire late Wednesday, his Likud party presented the paperwork to dissolve the parliament.

The Knesset passed the bill on Monday with 65 members of parliament voting in favor. But the motion could still be pulled at any moment before Wednesday's vote if a compromise is found.

The main opposition party, Blue and White, which also controls 35 seats, appealed for a chance to form a coalition. But a parliamentary vote for dissolution would automatically trigger new elections. Blue and White has ruled out any alliance with Netanyahu.

If Wednesday's final vote passes, it would mark the first time the scenario had played out in Israel and set the stage for an unprecedented second election in the same calendar year.

Polls indicate the results of a new election would not be much different from the last one.