China crash: Investigators examine cause behind the accident

It was mainland China's deadliest aviation disaster in 28 years 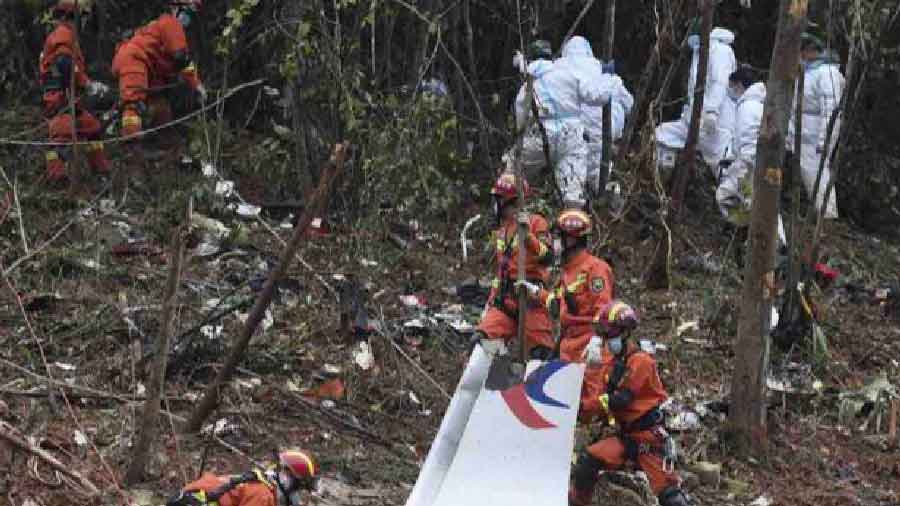 Investigators looking into the crash of a China Eastern Airlines jet are examining whether it was due to intentional action on the flight deck, with no evidence found of a technical malfunction, two people briefed on the matter said.

The Wall Street Journal reported earlier on Tuesday that flight data from one of the Boeing 737-800's black boxes indicated that someone in the cockpit intentionally crashed the plane, citing people familiar with the preliminary assessment of U.S. officials.

Boeing Co, the maker of the jet, and the U.S. National Transportation Safety Board (NTSB) declined to comment and referred questions to Chinese regulators. The Civil Aviation Administration of China (CAAC), which is leading the investigation, did not respond immediately to a request for comment.

The Boeing 737-800, en route from Kunming to Guangzhou, crashed on March 21 in the mountains of the Guangxi region, after a sudden plunge from cruising altitude, killing all 123 passengers and nine crew members aboard.

It was mainland China's deadliest aviation disaster in 28 years.

The pilots did not respond to repeated calls from air traffic controllers and nearby planes during the rapid descent, authorities have said. One source told Reuters investigators were looking at whether the crash was a“voluntary” act.

Screenshots of the Wall Street Journal story appeared to be censored both on China's Weibo social media platform and the Wechat messaging app on Wednesday. The hashtag topics“China Eastern” and“China Eastern black boxes” are banned on Weibo, which cited a breach of laws, and users are unable to share posts on the incident in group chats on Wechat.

The CAAC said on April 11 in response to rumors on the internet of a deliberate crash that the speculation had“gravely misled the public” and“interfered with the accident investigation work”.

A woman who asked to be identified only by her surname, Wen, who lost her husband in the crash, told Reuters on Wednesday that she had not seen the Wall Street Journal report but hoped the results of the investigation would be released soon.

Wen said she and other victims' family members had signed an agreement with China Eastern that included a point about compensation, but she declined to say how much had been offered.

China Eastern did not immediately respond to a request for comment. The Wall Street Journal said the airline had said in a statement that no evidence had emerged that could determine whether or not there were any problems with the aircraft.

NO TECHNICAL RECOMMENDATIONS
The 737-800 is a widely flown predecessor to Boeing's 737 MAX but does not have the systems that have been linked to fatal 737-MAX crashes in 2018 and 2019 that led to a lengthy grounding of the MAX.

China Eastern grounded its entire fleet of 737-800 planes after the crash but resumed flights in mid-April, a decision widely seen at the time as ruling out any immediate new safety concern over Boeing's most widely used model.

In a summary of an unpublished preliminary crash report last month, Chinese investigators did not point to any technical recommendations for the 737-800, which has been in service since 1997 with a strong safety record, according to experts.

NTSB Chair Jennifer Homendy said in a May 10 Reuters interview that board investigators and Boeing had traveled to China to assist the Chinese investigation. She noted that the investigation to date had not found any safety issues that would require any urgent action.

Homendy said if the board has any safety concerns it will ”issue urgent safety recommendations.”

The NTSB assisted Chinese investigators with the review of black boxes at its U.S. lab in Washington. Shares of Boeing closed up 6.5%.
A final report into the causes could take two years or more to compile, Chinese officials have said. Analysts say most crashes are caused by a cocktail of human and technical factors.

Deliberate crashes are exceptionally rare globally. Experts noted the latest hypothesis left open whether the action stemmed from one pilot acting alone or the result of a struggle or intrusion but sources stressed nothing has been confirmed.

The cockpit voice recorder was damaged during the crash and it is unclear whether investigators have been able to retrieve any information from it.

In March 2015, a Germanwings co-pilot deliberately flew an Airbus A320 into a French mountainside, killing all 150 on board.

French investigators found the 27-year-old was suffering from a suspected“psychotic depressive episode,” concealed from his employer. They later called for better mental health guidelines and stronger peer support groups for pilots. (Reporting by David Shepardson in Washington, Tim Hepher in Paris and Abhijith Ganapavaram in Bengaluru; additional reporting by Stella Qiu and Martin