Advertisement
Home / World / Indonesia flight, with 189 on board, crashes into sea

Lion Air said the aircraft was carrying 181 passengers, including a child and two babies, and eight crew members 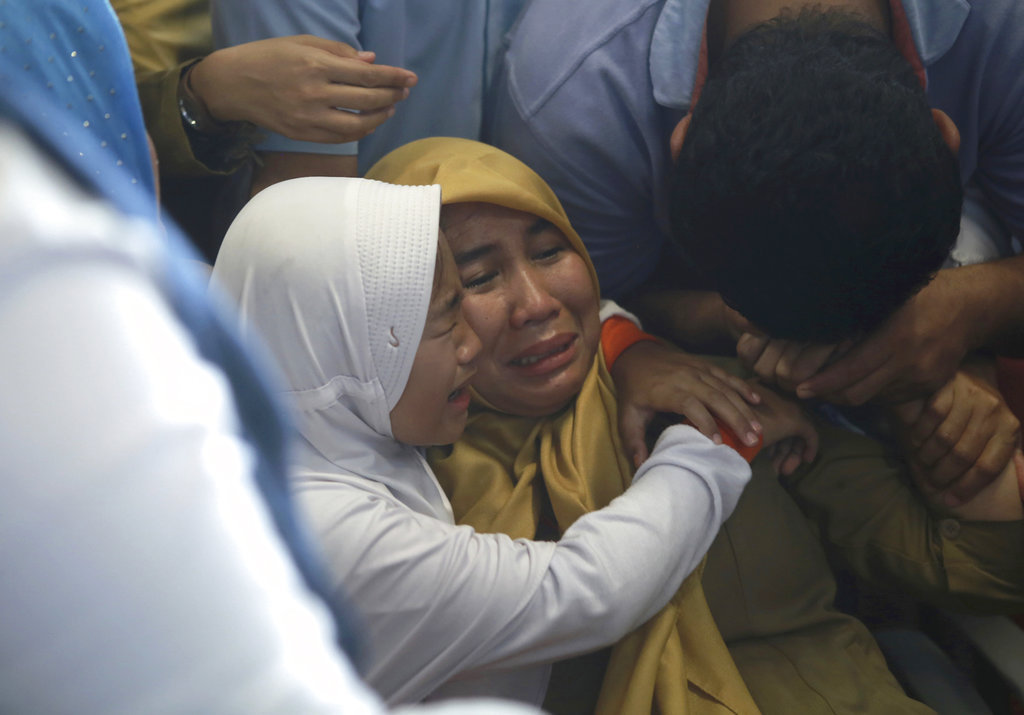 Relatives of passengers comfort each other as they wait for news on the Lion Air plane at Depati Amir Airport in Pangkal Pinang, Indonesia, on Monday.
AP
AP   |   Jakarta   |   Published 29.10.18, 05:17 AM

A Lion Air flight with 189 people on board crashed into the sea just minutes after taking off from Indonesia’s capital on Monday in a blow to the country’s aviation safety record after the lifting of bans on its airlines by the European Union and the US.

Indonesia’s disaster agency posted photos online of a crushed smartphone, books, bags and parts of the aircraft fuselage that had been collected by search and rescue vessels that have converged on the area.

Lion Air said the aircraft, on a 1-hour-and-10-minute flight to Pangkal Pinang on an island chain off Sumatra, was carrying 181 passengers, including one child and two babies, and eight crew members.

The National Search and Rescue Agency said the flight ended in waters off West Java that are 30 to 35 meters (98 to 115 feet) deep.

The agency’s chief Muhammad Syaugi told a news conference that divers are trying to locate the wreckage of the plane, which according to aviation website Flightradar24 was brand-new and delivered to Lion Air in August.

Indonesia’s transport ministry said the Boeing 737 Max 8 plane, which took off from Jakarta about 6.20 am, crashed just 13 minutes later. Data from aircraft tracking website FlightAware showed it had reached an altitude of only 5,200 feet.

The crash is the worst airline disaster in Indonesia since an AirAsia flight from Surabaya to Singapore plunged into the sea in December 2014, killing all 162 on board.

A report to the Jakarta Search and Rescue Office cited the crew of a tug boat which had reported seeing a Lion Air flight falling from the sky.

A telegram from the National Search and Rescue Agency to the air force has requested assistance with the search.

Lion Air is one of Indonesia’s youngest and biggest airlines, flying to dozens of domestic and international destinations.

In 2013, one of its Boeing 737-800 jets missed the runway while landing on the resort island of Bali, crashing into the sea without causing any fatalities among the 108 people on board.

Indonesian airlines were barred in 2007 were flying to Europe because of safety concerns, though several were allowed to resume services in the following decade. The ban was completely lifted in June this year. The US lifted a decade-long ban in 2016.