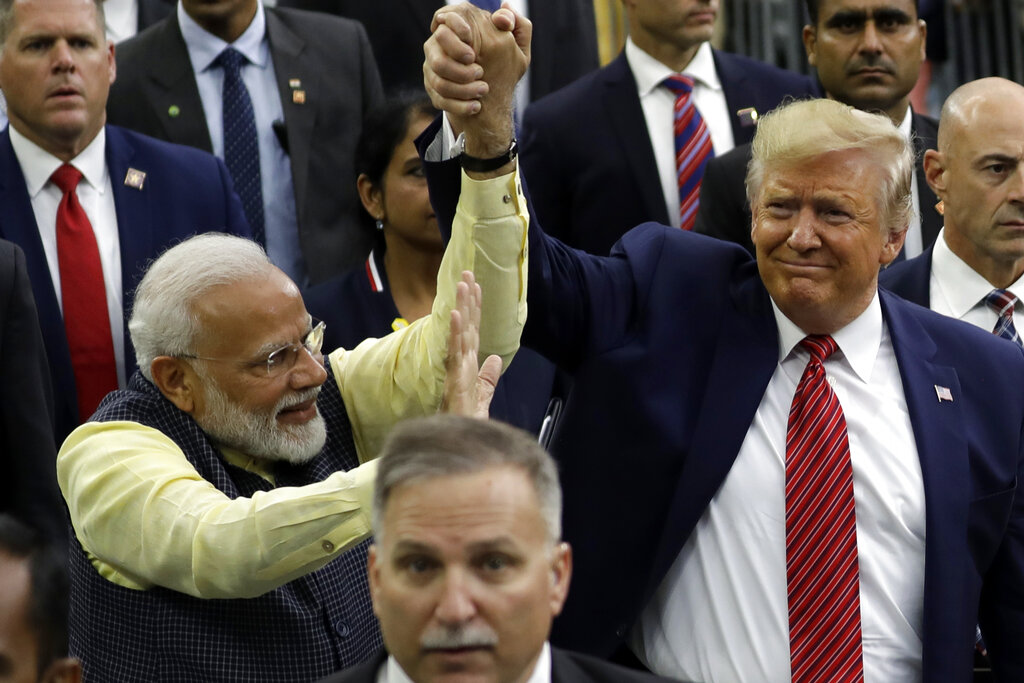 Asking journalists to 'wait' for the meeting between Narendra Modi and Donald Trump, a senior Indian diplomat refused to comment on the US President renewing his offer to mediate between India and Pakistan on Kashmir and his description of the Prime Minister's statement in Houston as 'very aggressive.'

Describing himself as 'an extremely good arbitrator', Trump on Monday said he was ready to mediate between India and Pakistan on the Kashmir issue if both sides agree to it.

He also described as 'very aggressive' the statement made by Prime Minister Narendra Modi during the 'Howdy, Modi!' community event in Houston during which the Indian leader had made a veiled reference to Pakistan and its support for terrorism.

'There is a meeting tomorrow (Tuesday) between Prime Minister Modi and President Trump. So let us wait for the meeting,' ministry of external affairs spokesperson Raveesh Kumar told a press briefing in New York on Monday in response to a question on the US President's remarks on Modi's statements and his offer again for mediation.

Trump made the remarks during his meeting with Pakistan Prime Minister Imran Khan on the sidelines of the UN General Assembly session.

India maintains that the Kashmir issue is a bilateral one and no third party has any role in it.

Responding to a similar query on Trump's offer to mediate, Kumar referred to Sarma's response that one should wait for Tuesday's bilateral meeting.

'The secretary's response (to wait for the bilateral meeting) is after giving some thought. You know, you are aware about our position. We have mentioned about this in the past. But my request is just hold on. Just hold on for the meeting tomorrow. I think it's not very far,' Kumar said.

In less than two days after the 'Howdy, Modi!' event in Houston, Trump and Modi will meet again for bilateral talks on Tuesday following Trump's address to the UN general debate.

On Monday, Trump praised the 'Howdy, Modi!' mega rally in the presence of the Pakistani premier and said he has heard a 'very aggressive statement' by Modi at the event.

However, at the same time, he said the statement was 'very well received within the room.'

'And I will say it was very well received within the room, the statement itself. That was a big room, 59,000 people. But it was a very aggressive statement. And I hope that they're going to be able to come together, India and Pakistan, and do something that's really smart and good for both. And I'm sure that...there's always a solution. And I really believe there's a solution to that,' Trump said.

During the 'Howdy, Modi!' community event on Sunday that was attended by over 50,000 members of the Indian diaspora and top US lawmakers, Modi, without naming Pakistan, said that India's decision to revoke Article 370 has troubled some people, who can't handle their own country and who support terrorism.

'Where do you find conspirators of 9/11 and 26/11 terror attacks,' Modi had said, in an apparent reference to Pakistan. 'It is time for a decisive battle against terrorism,' Modi had said.

In an unprecedented move, Trump had joined Modi for the event and at the end of the programme, the two leaders took a lap around the stadium, waving to the cheering crowd.

On August 5, the Indian government revoked special status to Jammu and Kashmir and bifurcated it into two union territories.

Pakistan has been trying to internationalise the Kashmir issue but India has asserted that the abrogation of Article 370 was its 'internal matter.' New Delhi has also asked Islamabad to accept the reality and stop its anti-India rhetoric.

Trump and Imran last met in July at the White House. During their first one-on-one interaction, the US President had expressed his willingness to mediate between India and Pakistan to resolve the Kashmir issue – an offer India rejected.

During Modi's meeting with Trump on the sidelines of the G7 Summit in France last month, the Prime Minister categorically rejected any scope for third party mediation between India and Pakistan on Kashmir.

According to a readout of the Monday's meeting between Trump and Khan issued by the White House, the two leaders discussed opportunities to deepen mutually beneficial energy cooperation and trade ties.

They also discussed ways to de-escalate tension between Pakistan and India, including combating terrorism, and the importance of India-Pakistan dialogue to resolve disputes between them.